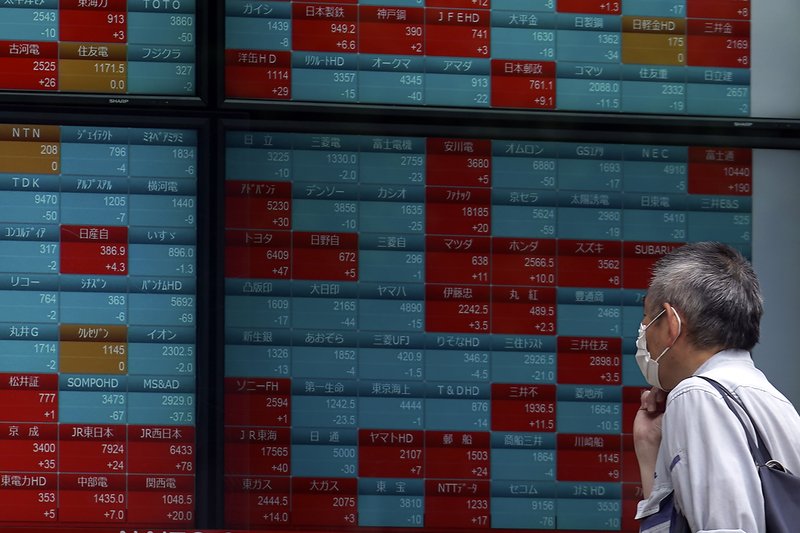 A man looks at an electronic stock board showing Japan's Nikkei 225 index at a securities firm in Tokyo Friday, May 22, 2020. Shares are slipping in Asia as tensions flare between the U.S. and China and as more job losses add to the economic fallout from the coronavirus pandemic. (AP Photo/Eugene Hoshiko)

Stock indexes finished mostly higher Friday as Wall Street shook off an early slide, closing out a solid week of gains for the market.

The S&P 500 index inched up 0.24% after having been down 0.5%. It ended the week with a 3.2% gain, largely due to a big rally Monday that offset all of the benchmark index's losses from earlier in the month.

Strength in technology, communications and real estate stocks helped reverse much of the market's early slide. Energy stocks fell the most as crude oil prices closed lower after six straight gains. Bond yields were mixed. Trading was choppy for much of the day ahead of the long holiday weekend. Markets in the U.S. will be closed Monday for Memorial Day.

Fresh hopes for a U.S. economic recovery in the second half of the year and optimism about a potential vaccine for covid-19 helped spur stocks higher for much of the week. Investors are betting that the economy and corporate profits will begin to recover from the coronavirus pandemic as the U.S. and countries around the world slowly open up again.

Traders remain wary, however, that the reopening of businesses could lead to another surge in infections, potentially hobbling efforts to get the nation's battered economy growing again.

"We're in a bit of a hold right now looking for the next catalyst," said Brian Levitt, global market strategist at Invesco. "There's still an awful lot of uncertainty we have to work though."

Despite the uneven finish, the three major stock indexes each ended the week more than 3% higher. Those gains were blown away by the rally in small-company stocks, which drove the Russell 2000 index 7.8% higher for the week, a bullish signal suggesting that investors expect that the economy is on the path to recovery. On Friday, the Russell 2000 gained 7.97 points, or 0.6%, to 1,355.53.

Fears of a crushing recession because of the coronavirus sent the S&P 500 into a skid of more than 30% from its high in February. Hopes for a relatively quick rebound and unprecedented moves by the Federal Reserve and Congress to stem the economic pain drove a historic rebound for stocks in April and have bolstered optimism that the market won't return to the depths it experienced in March.

Investors are now keenly focused on the process of reopening the U.S. economy, which is likely to continue accelerating as the summer progresses.

"The markets are expecting a reasonable resumption of economic activity, a manageable increase in coronavirus cases and a manageable situation when it comes to our health care system," said Mike Zigmont, head of trading and research at Harvest Volatility Management. "If we have a second freezing of the economy, then this market is grossly overvalued and the only people that are right now are the bears."

Bonds yields were mixed Friday. The yield on the 10-year Treasury note, a benchmark for interest rates on many consumer loans, fell to 0.66% from 0.67% late Thursday.

Beijing's move to take over long-stalled efforts to enact national security legislation in semi-autonomous Hong Kong spooked investors in Asian markets who endured months of pro-democracy demonstrations last year that at times descended into violence between police and protesters.

The proposed bill is aimed at forbidding secessionist and subversive activity, as well as foreign interference and terrorism. The move has drawn strong rebukes from the U.S. government and rights groups.