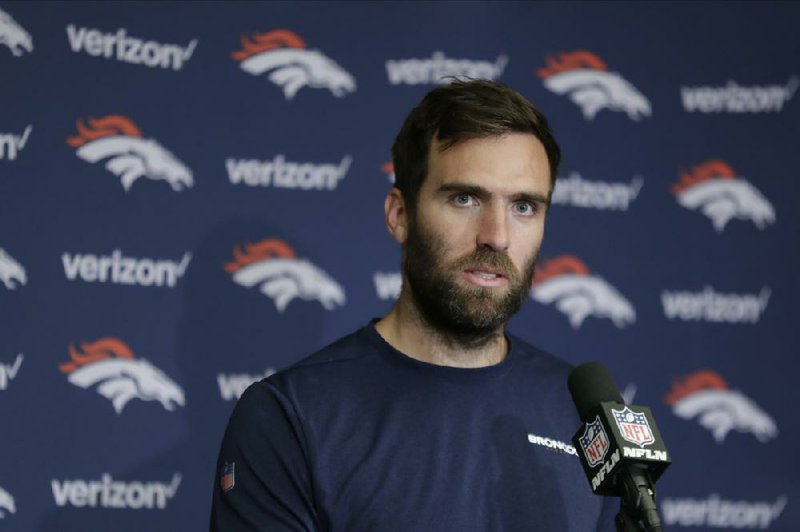 The New York Jets and quarterback Joe Flacco have agreed to terms on a one-year deal, the 2013 Super Bowl MVP's agency announced on Twitter. The move to bring in Flacco gives third-year starter Sam Darnold a veteran backup, but one who is also coming off a herniated disk that cut short his only season in Denver and required surgery to repair. JL Sports, headed by agent Joe Linta, announced the agreement Friday. Financial terms were not immediately disclosed, but ESPN reported the deal is worth $1.5 million and could reach $4.5 million with incentives. The 35-year-old Flacco spent his first 11 NFL seasons in Baltimore, where current Jets General Manager Joe Douglas was a scout in 2008 when the Ravens drafted the quarterback 18th overall out of Delaware.

The Seahawks' pursuit of a veteran running back to add depth at a position that last year was decimated by injuries ended Friday as the team agreed to a one-year deal with free agent Carlos Hyde, who gained 1,070 yards during a resurgent 2019 season with the Houston Texans. The news of Hyde's signing was first reported by The NFL Network, and it came after a source told The Seattle Times that the team was zeroing in on Hyde after contract talks stalled with longtime Atlanta Falcons standout Devonta Freeman. The NFL Network reported that the 6-foot, 229-pound Hyde will get a deal similar to what Seattle had been offering Freeman -- a one-year contract worth up to $4 million, though likely also including some significant playing time incentives to get the entire amount.

Ashley Cooper, who won four Grand Slam singles titles including the Australian, Wimbledon and U.S. championships in 1958, has died. He was 83. Tennis Australia said Friday that the former No. 1-ranked player and longtime administrator had died after a long illness. Cooper led Australia's Davis Cup team to victory over the United States to retain the title in 1957. After a back injury ended his professional career in 1959, Cooper returned to Brisbane, Australia, to run a business and work as an administrator in the sport.

Marquette forward Brendan Bailey is bypassing his final two seasons of eligibility to pursue a pro career. Bailey had entered his name into consideration for the NBA Draft in April but still had the option of returning to school. Bailey and Marquette Coach Steve Wojciechowski announced Friday that Bailey was indeed moving forward with his pro career. Bailey, the son of former Utah Jazz and Minnesota Timberwolves forward Thurl Bailey, will turn 23 on June 9. He spent two years on a mission with the Church of Jesus Christ of Latter-day Saints between the end of his high school career and the start of his Marquette career. The 6-8 forward averaged 7.1 points, 5.2 rebounds and 25.3 minutes this past season. He started each of Marquette's 30 games as the Golden Eagles went 18-12.