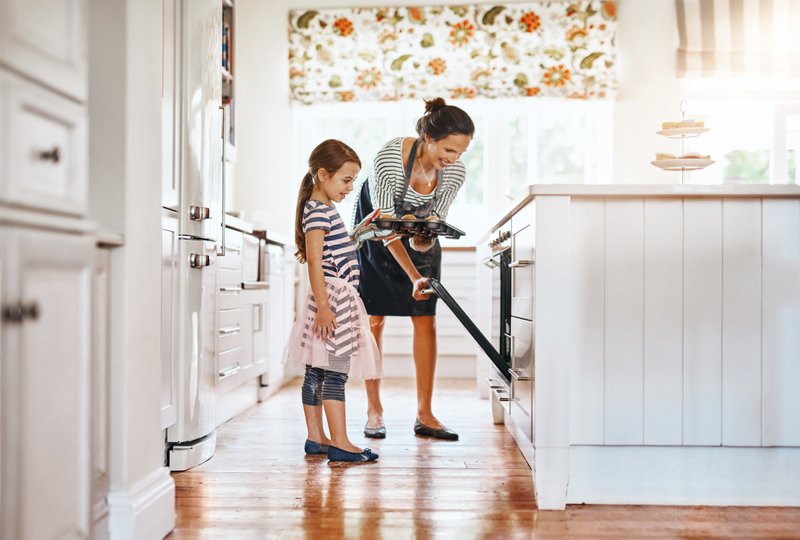 Mutually dependent -- Just as we rely on our home appliances to do their jobs, they rely on us for their care and maintenance. (Courtesy of LibertyHomeGaurd.com)

Just when you think it's safe to do home improvement for the sake of, heaven forbid, your own pleasure, your house has other plans.

In the past six months, DC and I had, maturely, I believe, replaced our water heater, garbage disposal and roof, all zeroes on the one-to-10 joy scale. With that done, we thought it safe to tackle the backyard landscape and turn a ho-hum space into our personal park. The project was well underway when DC came downstairs with the bad news: The pan underneath our air-conditioning system was full of water.

"What does that mean?" I asked.

"It ain't right," he said, rummaging through some receipts to find a bill from the service company.

The repairman came and gave the 17-year-old unit the once over.

He lowered his cellphone into the machine and snapped a photo to show me. The inside looked like the walls of a sewer pipe with measles.

"What is all that?" I asked stepping back.

"What kind of organic matter?" I asked.

"We're not allowed to say mold without a lab verification," he said.

And this is how they sell new air conditioners.

"The main problem is you have a blocked drain line," he said.

He drained the standing water and cleared the blockage. Cost: $363 including the service call. Then he gave us our options. A) We could get some more life out of the old girl if we got a new capacitor ($203), and had the evaporative coils cleaned ($780 due partly to "difficult access"). Or we could replace the unit for $8,000.

Like so much in life, whether you're dealing with a broken appliance, car, job or relationship, the ultimate question boils down to: Repair or replace?

By repairing, you could be wasting money and energy to postpone the inevitable. Or you might be buying years of productive service. It's a gamble.

With the repairs, our system probably had one to two years left, he said.

The next day I got an email from two guys letting me know about a home warranty business they launched. They claimed to know how to answer that proverbial repair-or-replace question. I called them up.

Ben Joseph and David Moreno founded Liberty Home Guard in 2017 because "only 4% of homeowners today have a home warranty, which told us there was room improvement," Joseph said. The New York-based company now has contractors in 39 states. For sure, home warranty businesses have a bad rap for repairing items they should replace, or replacing with inferior brands.

I asked for their best advice on how to make some common household appliances last, and when to let them go.

Life span: 13 years. (All life span figures are averages, according to Consumer Reports.)

Care: Keep them clean. Periodically wipe down the gaskets (that rubber stripping that runs around the door to form the seal), and twice a year, pull the big guy out, and vacuum dust that's accumulated behind it. When pushing the appliance back, leave a few inches between it and the wall. Don't overfill them. That can block vents, which need space to work. Try to leave about 15% negative space.

Repair or Replace? Refrigerators are often worth repairing because they are expensive to replace. However, if your refrigerator is 20 years old, and your compressor goes, spring for a new one.

Care: Regular maintenance could add 5-10 years to the life of an air-conditioning system. Replace filters every three to six months. Have your system professionally serviced annually to check drain lines, fan blades, coils and coolant levels, and to inspect for leaks.

Repair or Replace? HVAC systems have many mechanical parts, including fan blades or capacitors, that should be replaced if the rest of the system is still sound. However, if your unit is old, leaking coolant, has deteriorated coils or a broken compressor, it's time may have come.

Care: Again, overloading either machine will hasten its demise. Better to run additional loads. Go easy on the detergent. Wipe down the drum, door and gasket monthly. Leave the washer door open for 20 minutes to let it dry after running a load. Place dryers on even flooring. The shaking can lead to breakdowns. Clean the lint screen after every load, and periodically clean the vent that leads outside.

Repair or Replace? Fix simple leaks from a damaged hose. If your clothes aren't getting dry, check your vents and lint screens. However, for either machine, if more than one component is broken, get a new one.

Care: Though it seems counterintuitive, dishwashers need cleaning. Gunk (that's the technical term) accumulates around the gaskets and cleaning arms (the whirly parts at the bottom). Clean those to remove build-up. Don't overload your machine and don't overclean dishes before putting them in. Like kids, dishwashers benefit from having to work.

Repair or replace: Many dishwasher fixes are simple and worth doing, such as broken door latches or soap dispensers, worn gaskets, or broken cleaning arms. However, because dishwashers are relatively inexpensive, if a major component goes, such as a pump or motor, you're probably better off replacing.

As for our HVAC system, we chose neither option A or B, in favor of C. We will neither spend $1,000 on more repairs nor buy a new system just yet. As long as she's working, we'll keep her to the end. When the system inevitably fails, ideally long after we're done with the landscaping project, we'll buy a new one. Joseph and Moreno approved that plan.

Syndicated columnist Marni Jameson is the author of five home and lifestyle books.