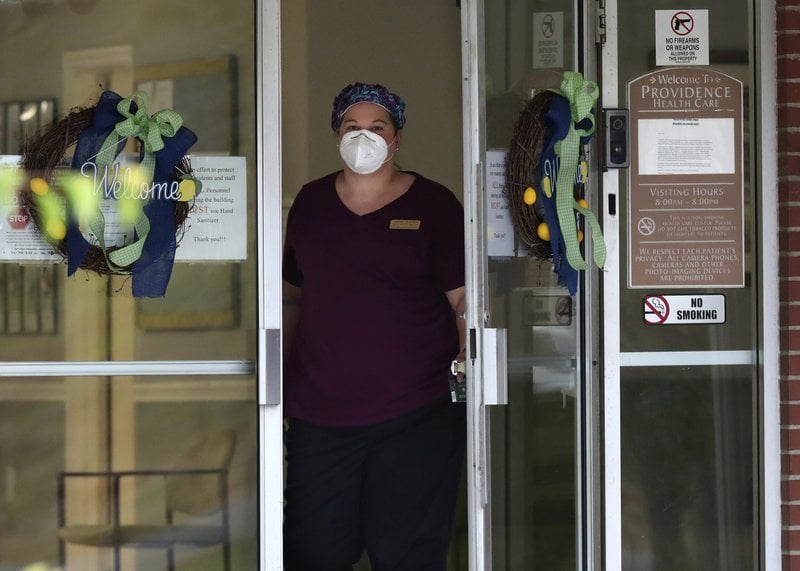 A healthcare worker looks out the main doors at Providence of Sparta Health and Rehab where more than thirty residents are infected with coronavirus on Wednesday, May 20, 2020, in Sparta. Hancock county, halfway between Augusta and Macon has become a new coronavirus hotspot. (Curtis Compton/Atlanta Journal-Constitution via AP)

ATLANTA -- Data on coronavirus infections that was a key driver in Georgia Gov. Brian Kemp's aggressive push to reopen the state was flawed and may have distorted perceptions of progress against the virus, experts say.

Georgia Public Health Department spokeswoman Nancy Nydam said in an emailed statement Thursday that the department included antibody tests when calculating the total number of tests conducted "since early April," using the same methodology as the Centers for Disease Control and Prevention. She said about 57,000 of the 407,000 total tests reported to the state have been antibody tests.

The inclusion of antibody tests in state testing data was first reported by the Columbus Ledger-Enquirer.

Antibody tests look for the presence of a protein that the body makes in reaction to the virus, while other, more common tests, called viral tests, look for the virus itself.

Conflating the two tests can create confusion about the current impact of the virus, said Dr. Richard Rothenberg, an infectious-disease expert at Georgia State University. That's because antibody tests tell you whether a person had the coronavirus in the past, not whether the person was infected at the time of the test.

Combining them can create "a false impression of what is happening now," he said. He also noted that antibody tests made up about 15% of the total tests reported to the state -- a figure that he said would make a "substantial impact" on the perception of the outbreak.

Antibody tests also tend to have lower rates of positive outcomes right now because they are being administered to a wide group of people, not just people suspected of being infected, said Benjamin Lopman, an epidemiologist at Emory University's Rollins School of Public Health. So adding them to the testing numbers will "lower the percent positive in a misleading way," he said.

"I don't see data that makes me very confident that we have this under control in Georgia," he said.

Kemp relied on the state seeing a downward trajectory of the percentage of positive tests when making his decision to be one of the first states in the nation to allow business to reopen. Salons, restaurants, gyms and other businesses in Georgia were given the green light to reopen in April.

The Republican governor has insisted the move was guided by data and state public-health officials, but it ran counter to the advice of many experts, who warned that resuming business too soon risked a fresh spike in infections.

News outlets report that the health department is not counting positive antibody tests when calculating the total number of positive confirmed cases in the state. That would artificially downplay the percentage of positive tests.

Kemp defended the state's data gathering during a news conference Thursday afternoon, saying that health officials are "taking massive amounts of data from countless sources, putting them into accessible format under a global spotlight, all at breakneck speed." He also said he hasn't been relying on any single data point to guide his decision-making.

"We do take in data from many, many different sources, not just our own public health testing, but private physicians, hospitals," Toomey said. "So we have to amalgamate that and make sure that it's consistent, and sometimes there are things that aren't quite right."

Toomey also said there are now nine cases of the "pediatric Kawasaki-like syndrome" in Georgia linked to the coronavirus.