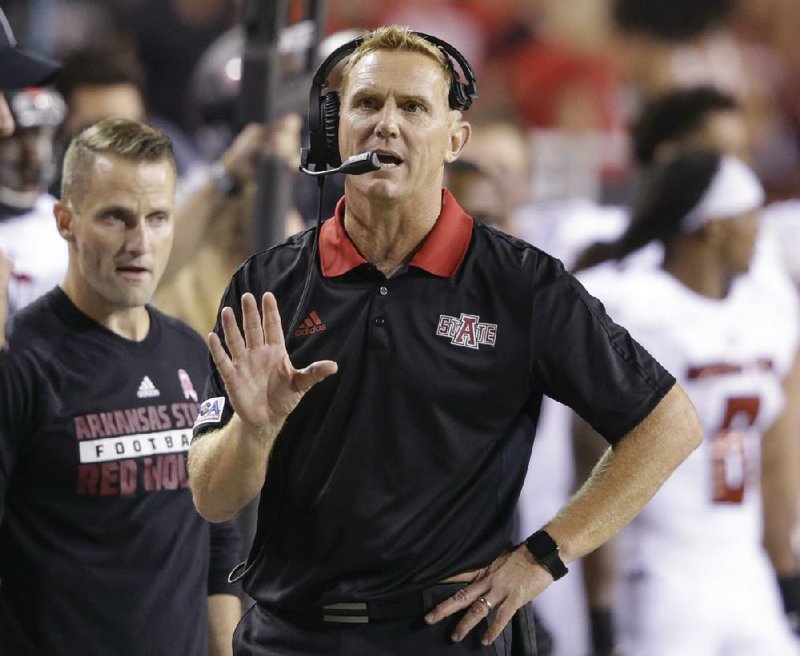 Arkansas State Coach Blake Anderson’s contract was given a three-year extension through 2023 and restructured, the school announced Friday. Anderson is 47-29 overall and has won two conference titles in his six years directing the Red Wolves. (AP file photo)

ASU announced that Anderson's contract was given a three-year extension through 2023 and restructured.

"Due to our unprecedented FBS success under a head coach with Blake's tenure, we started the process before the 2019 season to extend his contract. During this process, it gave us an opportunity to restructure his contract as well to be more beneficial for all parties," ASU Athletic Director Terry Mohajir said in a news release. "We believe this strengthens the continuity for our emerging football brand with Blake serving as a strong leader for our young guys in their athletics and academic pursuits."

Anderson is coming off his sixth season with the Red Wolves, who finished 8-5 and 5-3 in the Sun Belt Conference. They were second in the West Division and won the Camellia Bowl 34-26 over Florida International.

At ASU, Anderson is 47-29, 36-12 in Sun Belt play and has won two conference titles (2015, 2016). The Red Wolves have finished with a winning record every year under Anderson, and the program has extended its bowl streak to nine years in a row, which ranks inside the top 15 nationally among longest active bowl streaks. ASU is 2-4 in bowls under Anderson.

A couple of weeks before the Camellia Bowl, Anderson had been in talks with Missouri for its head coaching job, even interviewing for the position. He decided to withdraw his name from the search, and he said he was never offered the job. Missouri hired a different coach from the Sun Belt, Appalachian State's Eliah Drinkwitz, who is a former ASU assistant and Arkansas Tech alum.

When speaking with reporters in December in the aftermath of his Missouri courtship, Anderson didn't shy away from the possibility of leaving ASU some day, even stating, "At some point, there'll be an opportunity that probably takes me away from here."

But with an extension in place, his commitment to ASU has been solidified.

"We've been discussing this since last summer, and I think just with everything that was going on off the field, it became best to just kind of put it on hold," Anderson told the Arkansas Democrat-Gazette on Friday. "Terry and the administration have made it really clear that they wanted me here for the future, and I've been clear, too, that I'm happy here. Today didn't come as a shock, it's just a [relief]. But very excited for what it means for the program, what it means for my staff and the people that do the hard work to get us going where we want to go.

"I think just for our fanbase and everybody to know, nobody's satisfied, but we're really happy with what we're doing and excited about the future."

Anderson's annual salary is remaining the same at $825,000 per year, according to a school spokesman.

As part of the restructuring of the contract, Anderson has various performance incentives written in that include bonuses for team successes and personal coaching awards.

The Red Wolves are set to have both of their top quarterbacks back in Logan Bonner, who missed the final nine games with an injury to his throwing hand, and Layne Hatcher, who replaced Bonner and became the Sun Belt Freshman of the Year. Question marks remain at wide receiver with the losses of Omar Bayless, the Sun Belt Player of the Year, and Kirk Merritt, as well as on the defensive side after many key departures up front and in the secondary.

"There's still work to be done," Anderson said. "We want to compete nationally and be the best in the country, and we want to get back to the podium in our league, and we obviously we want to really put a stamp on the legacy of what this place is capable of. We've come close in some areas, and we've had some setbacks and obviously some adversity that we faced. [We've had] a level of consistency that I'm really proud of, but definitely still work to be done and more that we want to do.

"I tell guys all the time, I think the next six years are going to be better than the last six, and I believe that's possible." 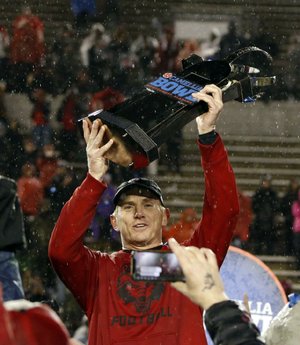 Arkansas State football Coach Blake Anderson agreed to a three-year contract extension that will run through the 2023 season. The Red Wolves have had winning seasons in all of Anderson’s six seasons. (AP/Butch Dill)