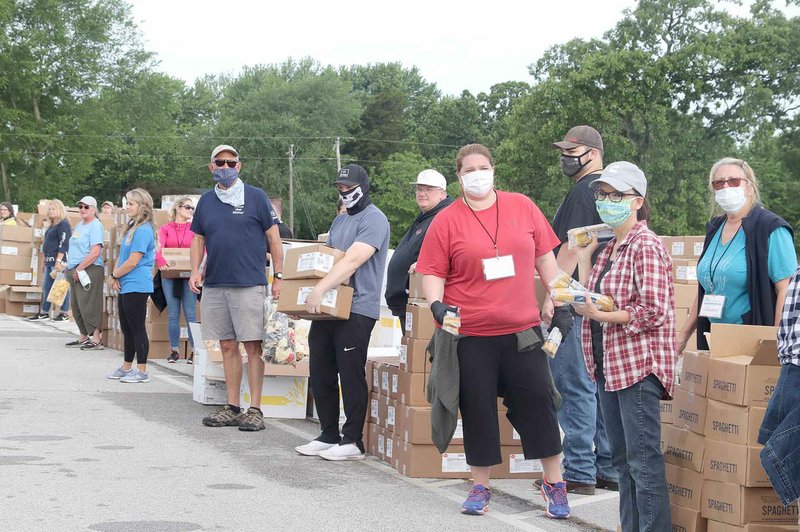 LYNN KUTTER ENTERPRISE-LEADER Volunteers wait for the next group of vehicles to drive up and be loaded with food donated by Tyson Foods. About 55 people volunteered Saturday for the food giveaway.

LINCOLN -- Many familiar faces could be seen among the 55 or so volunteers who handed out breaded chicken, tortilla chips and spaghetti during a food drive sponsored by Tyson Foods on May 14 in the Lincoln High School parking lot.

The food giveaway started at 8 a.m. and vehicles started lining up as early as 5 a.m. Volunteers showed up about 7 a.m. to unload boxes of food and get organized to give away food.

Pat Bourkey with Tyson Foods Corporate Social Responsibility said the company has given away 12 million pounds of food in many areas of the country during food giveaway events in response to the covid-19 crisis.

In Lincoln, the company gave out 115,000 pounds of food, which included breaded chicken tenders and tortilla chips. In addition, Life Ministries in Prairie Grove donated pasta to add to the giveaway.

Lynn Gregson, bishop with Prairie Grove ward of the Church of Jesus Christ of Latter-day Saints and a member of the community's Ministerial Association, said all food was given away by around 2 p.m. Some boxes were still left over but several cars came in toward the end and they were able to help those residents.

Volunteers included people from Farmington, Prairie Grove and Lincoln schools, area churches, Life Ministries and others just from the community.

"It's great when you see all this many people helping," Gregson said. "It was a wonderful, wonderful deal."

Cindy Dobbs with Life Ministries estimated 2,000 families were helped throughout the event, based on 20 pounds of chicken per family.

Bourkey said Tyson began its covid-19 response around March 1. In the past, the company has given food products to food banks but decided because of the coronavirus outbreak to direct food to communities also.

Some of the food, such as the institutional size bags of chips, is because restaurants haven't been open and not ordering food. The rest is a quickened pace to help people in need, Bourkey said.

The food giveaway wasn't restricted to a certain area. Bourkey said anyone was welcome to drive through and pick up the food.

In addition, Tyson gave out food to all Farmington, Lincoln and Prairie Grove school districts and to senior centers in the three communities. Food also was made available for some faith-based organizations.

Bourkey credited Lisa Frye of Lincoln in directing Tyson to set up an event in Lincoln. Frye also works for Bourkey's team. She recognized the need in western Washington County and asked about a donation for those communities.

Gregson said he was one of the people Frye called when looking for assistance in recruiting volunteers. He made some calls and it didn't take long to line up enough volunteers, he said. Social media was used to advertise the food giveaway and that news spread quickly throughout the area, he added. 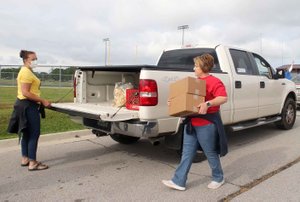 LYNN KUTTER ENTERPRISE-LEADER Melissa Parrish with Prairie Grove schools and Wendy Burrus with Farmington schools were two of about 55 volunteers at the Tyson Foods' Food Giveaway. Volunteers came from Lincoln, Farmington and Prairie Grove. In all, 115 pounds of food was given away to an estimated 2000 people. 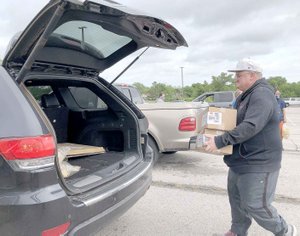 LYNN KUTTER ENTERPRISE-LEADER Jeff Bonacci of Fayetteville, a former athletic director for Lincoln Consolidated School District, loads two boxes of Tyson breaded chicken tenders into this waiting vehicle. Bonacci was helping as one of many volunteers. 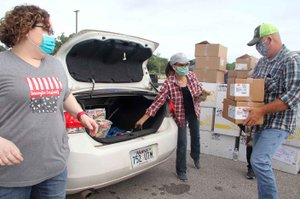