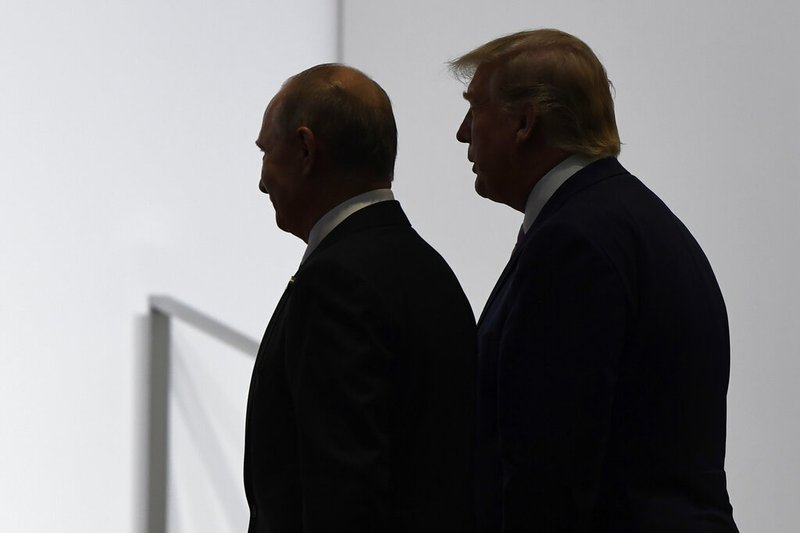 FILE - In this June 28, 2019, file photo, President Donald Trump and Russian President Vladimir Putin walk to participate in a group photo at the G20 summit in Osaka, Japan. - Photo by AP/Susan Walsh

President Donald Trump will inform Russia today that the United States is pulling out of the Open Skies Treaty, negotiated three decades ago to allow nations to fly over one another's territory with elaborate sensor equipment to assure they are not preparing for military action, senior administration officials said.

U.S. officials have long complained that Moscow was violating the Open Skies accord by not permitting flights over a city where it was believed Russia was deploying nuclear weapons that could reach Europe, as well as forbidding flights over major Russian military exercises. Satellites, the main source for gathering intelligence, are not affected by the treaty.

"You reach a point at which you need to say enough is enough," said Marshall Billingslea, Trump's new special representative for arms control. "The United States cannot keep participating in this treaty if Russia is going to violate it with impunity."

In classified reports, the Pentagon and U.S. intelligence agencies have contended the Russians are also using flights over the United States to map out critical infrastructure that could be hit by cyberattacks.

European allies, including those in NATO, are also signatories to the treaty. They have warned that, with Washington's exit, Russia will almost certainly respond by also cutting off their flights, which the allies use to monitor troop movements on their borders.

For Trump, the decision is the third time he has renounced a major arms control treaty.

Two years ago he abandoned the Iran nuclear accord, negotiated by former President Barack Obama. Last year he left the Intermediate-Range Nuclear Forces Treaty, again saying that he would not participate in a treaty that he said Russia was violating.

The Open Skies Treaty was negotiated by former President George H.W. Bush and his secretary of state, James Baker, in 1992, after the collapse of the Soviet Union.

Sen. Tom Cotton, R-Ark., has pushed for the Trump administration to withdraw from the Comprehensive Nuclear Test Ban Treaty, which has yet to enter into force, as well as the Treaty on Open Skies. He has argued that the pact allows spying capability that Moscow wouldn't otherwise possess, and that it doesn't give the United States any intelligence that isn't available elsewhere.

"Like so many treaties with Russia, the Open Skies agreement was negotiated and signed with good intentions, then abused by Moscow for maximum advantage," Cotton wrote late last year in an op-ed piece in The Washington Post.

Cotton praised the Trump administration's decision Thursday, but Gen. Michael Hayden, a senior intelligence official in the Bush administration, was critical of the move. "This is insane," he tweeted, adding that he previously served as CIA director.

Russia has said engagement in the treaty is valuable. Billingslea and his boss, Secretary of State Mike Pompeo, disagree.

Under the terms of the treaty, Trump's formal notice to Russia and the other signatories starts a six-month clock toward final withdrawal. It requires a meeting of all the signatories within 60 days.

"Russia didn't adhere to the treaty. So until they adhere, we will pull out, but there's a very good chance we'll make a new agreement or do something to put that agreement back together," Trump told reporters at the White House before leaving for Michigan.

"So I think what's going to happen is we're going to pull out and they [the Russians] are going to come back and want to make a deal," Trump said. He added: "I think something very positive will work."

"Our position is absolutely clear and is invariable: The withdrawal of the U.S. from this treaty will come as yet another blow to the system of military security in Europe, which is already weakened by the previous moves by the administration," Grushko told state news agency Tass.

Sen. Ted Cruz, R-Texas, a longtime proponent of withdrawal, said in a statement, "It was long past time for the United States to withdraw from this treaty and stop allowing Russia to use our skies to spy on the American people."

"The transparency it provides has helped prevent miscalculation and misunderstandings that could have otherwise led to conflict," said John Tierney, a former Democratic representative from Massachusetts who now is executive director of the Center for Arms Control and Non-Proliferation. "This has become a reckless pattern" for the Trump administration, he said.

Trump's announcement comes as the U.S. begins new nuclear arms control talks with the Kremlin aimed at replacing an expiring weapons treaty with a modern and potentially three-way accord that brings China into the fold. Senior administration officials say Trump's willingness to leave the Open Skies Treaty is evidence of how prominently arms control verification and compliance will feature in the new talks.

Information for this article was contributed by David E. Sanger of The New York Times; by Deb Riechmann, Matthew Lee, Robert Burns, Edith Lederer and James Heintz of The Associated Press; and by John Hudson, Paul Sonne and Isabelle Khurshudyan of The Washington Post.