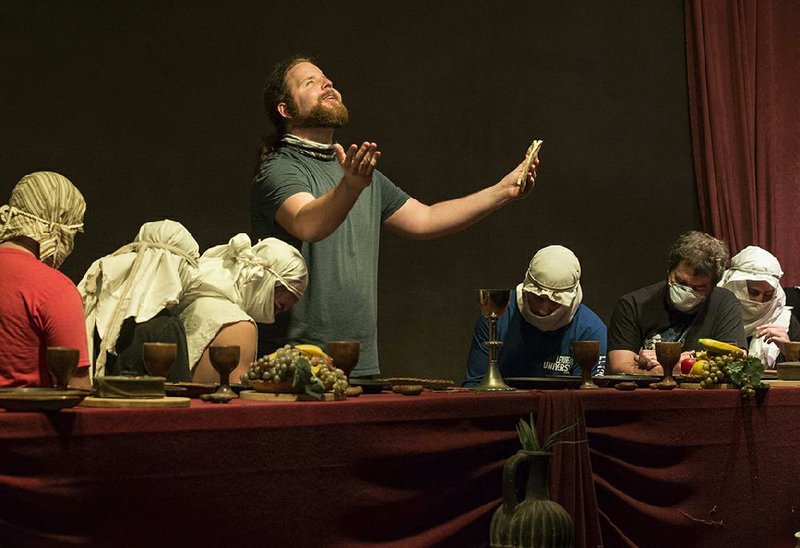 EUREKA SPRINGS -- When The Great Passion Play opens tonight for its 2020 season, Jesus will try to keep his distance from the other actors.

But sometimes it just won't be possible.

"The challenges of crucifying someone at 6 feet, we feel those," said Kent Butler, director of operations for the play and one of three actors who portrays Jesus.

In normal years, the Passion Play opens on Good Friday with performances in its 4,000-seat amphitheater atop Magnetic Mountain.

But nothing is normal this year.

Because of the coronavirus pandemic, the opening was postponed for six weeks as Gov. Asa Hutchinson shut down large venues, then allowed them to reopen.

With the blessing of the Arkansas Department of Health, the Passion Play will open tonight. A venue wanting to have more than 50 people in the audience must submit a plan to be approved by the Health Department.

[Video not showing up above? Click here to watch » https://www.youtube.com/watch?v=s3uDPGGp__o]

"Basically, we have to abide by multiple different types of regulations," Butler said. "Thankfully, we're outdoors so it's easy to keep the audience safe. We've got a really good plan. Now the plan is to execute it and keep everybody safe."

The Passion Play is limiting attendance to 1,000. Butler said every other row will be empty, and groups will be asked to leave seven vacant seats (about 12 feet) between them and the next group.

"Seven is the number of perfection, so it makes sense," he said.

People are urged to buy tickets online at greatpassionplay.org. Audience members are "strongly encouraged" -- but not required -- to wear face coverings.

Butler said he doesn't know if the venue will sell anywhere near 1,000 tickets for tonight's show. According to a Health Department document, the largest crowd the Passion Play drew last year was under 900.

Founded in 1968, more than 7.5 million people from all over the world have seen Eureka Springs' Passion Play, making it the outdoor play with the largest attendance in the United States, according to the Encyclopedia of Arkansas.

The play depicts the last days in the life of Christ. For much of the late 20th century, it was the primary attraction around Eureka Springs. But attendance at the play peaked in 1992 at 289,212 and now hovers around 50,000 a year, Butler said.

According to the current schedule, the play will continue through October, being performed four nights a week during July but fewer nights per week in other months. There is one performance each night, and seats will be sanitized afterward.

Many adjustments have been made for opening night.

Hand sanitizer will be available at every entrance and exit, according to the plan submitted by the Passion Play and approved by the Health Department.

"We've got 20 gallons of hand sanitizer," Butler said. "I'm not going to tell you where it is. It's being stored at an undisclosed location."

Hand sanitizer, like toilet paper, is a coveted commodity during the pandemic.

Even with a seven-story statue of Jesus watching over them, people have been stealing toilet paper on Magnetic Mountain.

"We had toilet paper stolen three days in a row at the Christ of the Ozarks statute," said Butler, referring to the white mortar figure of Christ that looms over the tourist town. "We had to put a lock on the toilet paper."

The Health Department rules mean that the actors will be masked, for the most part. Biblical-looking headscarves that cover the mouth will suffice, but performers are encouraged to wear masks underneath.

The Passion Play's set is 500 feet wide and 400 feet deep, providing enough room for camels, sheep and other animals in addition to human actors.

Joe Smith, a director of the Passion Play, spoke to the cast before a rehearsal Tuesday night, explaining the Health Department regulations.

"The Christ figure is going to perform without a mask as long as everybody else has masks," he said. "They will let us do that."

Same goes for Pilate, Herod and the angel.

"Of course, Judas will have to have all of his stuff on," Smith said.

Later, Butler explained that entire families are cast in the play. In scenes that require close contact among actors, the Passion Play will try to cast family members in those roles.

"Among those 225 actors that we pull from, there are 91 families," he said. "We have thankfully a lot of families that make this happen. Our goal will be to cast those families because they've already been in close proximity at home."

Butler said 140 actors are normally needed, but Smith said the show can go on as long as he has 100 actors there. Many of them are deployed in crowd scenes and have no speaking roles.

But Smith said some scenes will be difficult to do if the actors are required to be six feet apart.

"So many scenes here are very intimate, and that's the only way the scene really works," he said.

Butler said the venue will try to limit the close proximity exposure, and masks will be used as much as possible.

Some scenes, like the Last Supper, will require actors to be close to one another. In that case, the disciples will have their faces covered except when they have "extensive speaking parts," according to the plan approved by the Health Department.

"Only one individual at a time would be uncovered and would be at least 12 feet from another uncovered performer, 'Jesus' in this case," according to the plan.

Butler said there's a scene where Jesus breaks bread and hands it to the disciples, but this year, they won't eat it. They'll discretely dispose of it.

"I think the audience will be understanding with the changes we've had to make," he said.

The rehearsal Tuesday night was what Butler called a "head rehearsal," meaning the actors wore their headgear but not the rest of the costumes. The purpose behind that, Smith said, was to cut down on his laundry chores.

Before the rehearsal, Butler spoke to about 100 cast members in the amphitheater.

"It's a miracle that we get to perform the Passion Play Friday night -- just a miracle," he said. "How many people think the world needs Jesus now more than ever before? If we have to wear a face covering so that people can experience the love of Jesus, guess what? I'm gonna hide my awesome beard."

Butler said he was willing to wear a mask to share the Gospel, and he hoped the other cast members were willing to do the same.

He said most of the actors don't usually show up for the rehearsal because they've been in the play for years and they know their lines.

Beginning that first year, 1968, the Passion Play has used a soundtrack to broadcast music and dialogue over the audience to make sure they can hear the actor's lines and ensuring none of the lines are flubbed, Butler said. Actors in the play speak their lines each night, but that's largely to help other actors who can hear them during the scene. Butler said the Passion Play isn't lip-synced.

Jeff Goostree of Bentonville has been a cast member for 20 years.

He has portrayed Pontius Pilate for 15 of those years, usually on Saturdays.

"On Thursday and Friday nights, it's just wherever they want to put me," said Goostree. "I'm Judas and James. I can even be the back of the camel if they want me to."

Goostree said the Passion Play is "more important than ever now."

He said participating in the play is immersive, transporting the cast back 2,000 years.

"It's always been a lifeline for me," he said. "It sort of resets my clock as to what's important."

Goostree said the cast can hear the applause but can't see the crowd because of the lights. So the actors don't know when they're getting a standing ovation.

When he plays Pilate, Goostree said he has time to go to the back of the crowd before the play ends. That way, he can greet people as they leave. Many of them want to pray with members of the cast.

"It's those times that you meet people who have tears streaming down their faces," Goostree said. "You see lives that are changed."

Smith, who played Jesus for 30 years, said the actors are all volunteers. They get paid "a small portion of the gate" later on. He said it amounts to about minimum wage, or just enough to cover the cost of gas for those who drive over from Rogers.

Every employee will be screened each night and their temperatures taken.

"There's always going to be stuff to tweak," he said. "We have these challenges all the time so we're used to dealing with stuff that changes on a day-to-day basis, so coronavirus is just one more challenge we have to figure out."

On Tuesday, the sheep went the wrong way and a mechanical interlock on the "Ascension mechanism" failed.

That could have left Jesus dangling in midair indefinitely, somewhere between Heaven and Earth.

But those things will be fixed before opening night, Butler said.

"Everybody would be safe," if the Ascension mechanism malfunctions again, he said. "We just don't want to leave Jesus up in the air too long." 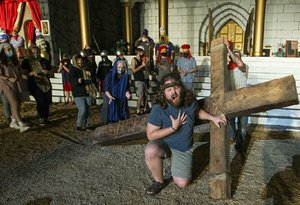 The cast of The Great Passion Play rehearses Tuesday in Eureka Springs for today’s opening that will include social distancing and protective measures for the actors and the audience. (NWA Democrat-Gazette/Ben Goff)