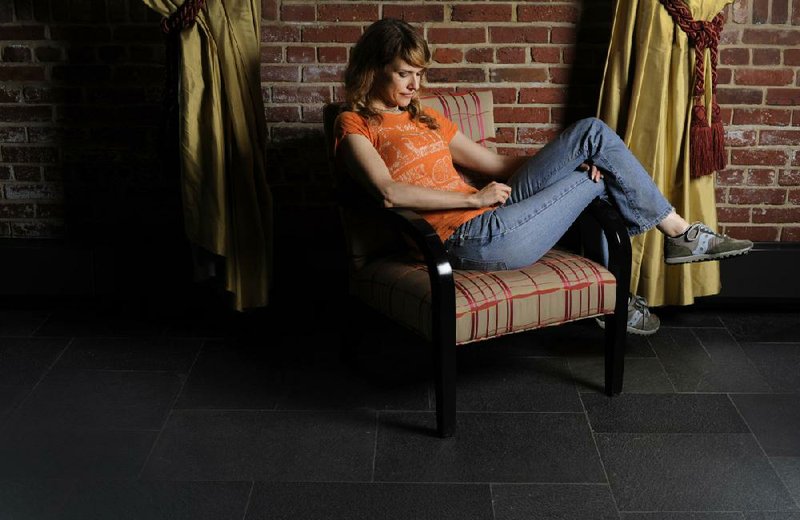 Film director Lynn Shelton poses in Washington in 2009. Shelton died May 15 at the age of 54. (Washington Post/Melina Mara)

Like many film fans, I was devastated by the news that writer-director Lynn Shelton died of a previously undiagnosed blood disorder May 15 at the age of 54. The loss felt deeply personal, even though we had never met and only spoke once, very briefly, in 2009. The occasion was the release of Humpday, a beguiling comedy starring Mark Duplass and Joshua Leonard as heterosexual men whose ideas about intimacy, desire and friendship are tested when they agree to participate in a pornographic art project.

Smart, self-aware and very funny, Humpday was the third film of Shelton's enormously promising career. She'd made an auspicious debut with We Go Way Back and impressed with an even better sophomore follow-up, My Effortless Brilliance. In recent years, she was busy directing episodes of series such as GLOW, The Morning Show and Little Fires Everywhere.

As much as I admired Shelton's movies for their loose, unforced style and observant humor, I instinctively gravitated toward the narrative arc of her career: She was a late bloomer, having begun directing when she was 40, inspired by the French director Claire Denis, who made her first film at the same age. (Having become a critic at the ripe old age of 35, I could relate.) Although Shelton studied with experimental filmmaker Peggy Ahwesh at the School of Visual Arts in Manhattan, she was largely self-taught, honing her skills by editing other people's movies and making her own experimental work.

As a middle-age woman who had the audacity to pick up a camera and tell her own stories, Shelton was part of a self-determined and mutually supportive group of filmmakers: Ava DuVernay directed her first narrative feature (I Will Follow) after having been a successful publicist, learning the craft by way of DVD commentaries and listening to her clients' interviews during press junkets. Greta Gerwig had made her name as an actress, co-directed Nights and Weekends with Joe Swanberg and endured patronizing questions about "helping" Noah Baumbach write Frances Ha and Mistress America by the time she made her solo directing debut with Lady Bird, a good decade into her career. Dee Rees worked in marketing and brand management before realizing, while on set for a commercial shoot, that she wanted to be a filmmaker.

Rees wound up going to film school before making a splash at Sundance with Pariah. But Shelton, as did so many of the women who came up alongside her, mostly figured it out by simply getting to work and doing the thing, developing her own intimate, unobtrusive style and offering a refreshingly pragmatic antidote to the kind of self-consciousness and obvious "technique" that plagues the macho auteurist myth.

She called her approach to production the "upside-down model of filmmaking," whereby she would whittle down crews and equipment lists to the bare minimum, the better to give actors free improvisatory rein. The final polished draft would emerge in the editing, which she always did herself. We have words like "Tarantino-esque" and "Apatovian"; "Sheltonian" could just as well enter the lexicon to describe films that were unfailingly amusing, smoothly constructed and humane, even as they cast a gimlet eye on such intractable human foibles as self-defeat, dashed hopes, conflicting desires and the terrors of intimacy.

The conundrum of Shelton's naturalistic, self-effacing style is that it can be confused with being a matter of happy accident. But, as she told me in 2009, "Every single choice, every frame, every shot, every moment [is] deliberate. Everything [is] put there for a reason and nothing is just random or happenstance." She added that she saw her job as having "a clear vision for the film, and then to communicate that vision to all the collaborators. And that's actually very complicated and not easy to do."

The sensibility that Shelton brought to her films -- wise, forgiving, full of anthropological detail -- can't be taught in an NYU lecture hall or amid the cables and cameras of a movie set. It reflects a life lived beyond those confines, observing its contradictions and tiny heartbreaks. As DuVernay said during an onstage discussion at the BlackStar Film Festival in 2017, "I was fully grown. I didn't go into the idea of filmmaking thinking it was going to be anything sexy. I just had stories I wanted to tell."

As happenstance would have it, it was Shelton who handed DuVernay her directing award at Sundance in 2012, for her drama Middle of Nowhere, having received a special jury prize at the festival for Humpday just three years earlier. DuVernay beautifully memorialized the moment after Shelton's death, tweeting: "She announced my name with pride. Handed it to me with love. Rooted for me long after."

It seemed like Shelton was rooting for the rest us as well, even at her most skeptical: As she said when Humpday came out, "I've always been a close observer of the emotional life of people, and I've been particularly compelled and moved by characters who fervently want to connect with each other but who struggle deeply to do so."

Her most recent theatrical feature, last year's Sword of Trust, exemplified that ethic, starting out as a typically hilarious sendup of American conspiracy culture, morphing into an antic road comedy, only to ambush viewers with a deeply affecting soliloquy about love, powerlessness and acceptance. The monologue is delivered by Marc Maron, who was Shelton's real-life romantic partner. Just a week before she died, the two had announced that they were working on another collaboration, a "domestic dramedy" featuring Shelton's preferred number of three characters.

The prospect of a new Lynn Shelton movie is the kind of thing that can put a spring in the step of even the most beleaguered film critic. Now, the sudden loss of her transcendent talent leaves an incalculable void. It's just the kind of radical tonal shift that, if there were anything remotely comforting, wryly funny or redemptive about it, would be positively Sheltonian.