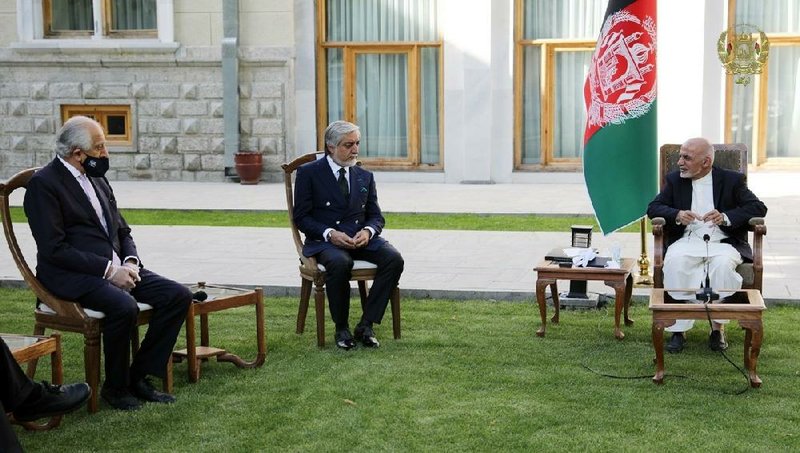 Zalmay Khalilzad, in a flurry of tweets Thursday, told of his meetings in Doha earlier in the week with Taliban representatives and on Wednesday with Afghan President Ashraf Ghani and fellow leader Abdullah Abdullah. All were aimed at resuscitating a U.S.-Taliban peace deal signed in February.

Khalilzad called for a reduction in violence by all sides in Afghanistan's protracted conflict that has kept America militarily engaged for 19 years. He also said too much time has been wasted getting to the second and critical phase of the peace deal, which calls for talks between the Taliban and Afghanistan's political leadership.

Abdullah will head those efforts as part of the deal he signed with Ghani to end their monthslong dispute over who won Afghanistan's presidential election last September. He conceded the win to Ghani but as part of a power-sharing agreement.

President Donald Trump said again last week that American soldiers still are policing the country and called on Afghanistan to step up.

The U.S. has about 12,000 soldiers deployed to Afghanistan, split between counterterrorism and the NATO-led Resolute Support's 16,500 troop mission, which trains and aids Afghanistan's forces. Washington currently pays about $4 billion annually to keep Afghanistan's military in fighting form.

Department of Defense officials have told The Associated Press that their biggest worry in Afghanistan is an increasingly active ISIS affiliate headquartered in the east. The group has ties to Middle Eastern affiliates as well as militant groups like the Islamic Movement of Uzbekistan and the Chinese Uighur group, East Turkestan Islamic Movement.

The officials, who spoke on condition of anonymity because of the sensitivity of the subject, said the ISIS affiliate in Afghanistan has been linked to foiled plots to attack America in recent years. The U.S. also blamed ISIS for a brutal attack on a maternity hospital earlier this month in Kabul that left 24 people dead, including two infants and several mothers.

The increased ISIS activity in Afghanistan has added urgency to U.S. efforts to resuscitate the peace deal, which commits the Taliban to fight terrorist groups in Afghanistan. The same Department of Defense officials said they want the Taliban in the battle to rout ISIS from Afghanistan.

Taliban representatives say a cease-fire will be on the agenda in any intra-Afghan talks, which were to start by mid-March. The delay has been blamed on Afghanistan's squabbling leadership in Kabul and disruptions in prisoner releases, which were promised as part of the peace deal ahead of intra-Afghan negotiations.

In his tweets, Khalilzad called for the prisoner release to be completed. He also reiterated that he is seeking Taliban assistance with U.S. citizens missing in Afghanistan, including U.S. contractor Mark Frerichs who disappeared in January. Several Taliban leaders contacted by the AP said they are not holding Frerichs and have told Khalilzad that many times.

Suhail Shaheen, Taliban spokesman in Doha, said Wednesday that the Taliban are committed to the deal and demanded its prisoners be released.

Meanwhile, in eastern Nangarhar province, where ISIS is based, a suicide bomber targeted a district chief and his son Thursday as they were driving through Chaparhar district, said Attaullah Khogyani, the provincial governor's spokesman. Sediq Dawlatzai and his son were wounded in the attack and transferred to a hospital in the capital, Jalalabad. No one immediately claimed responsibility for the attack.