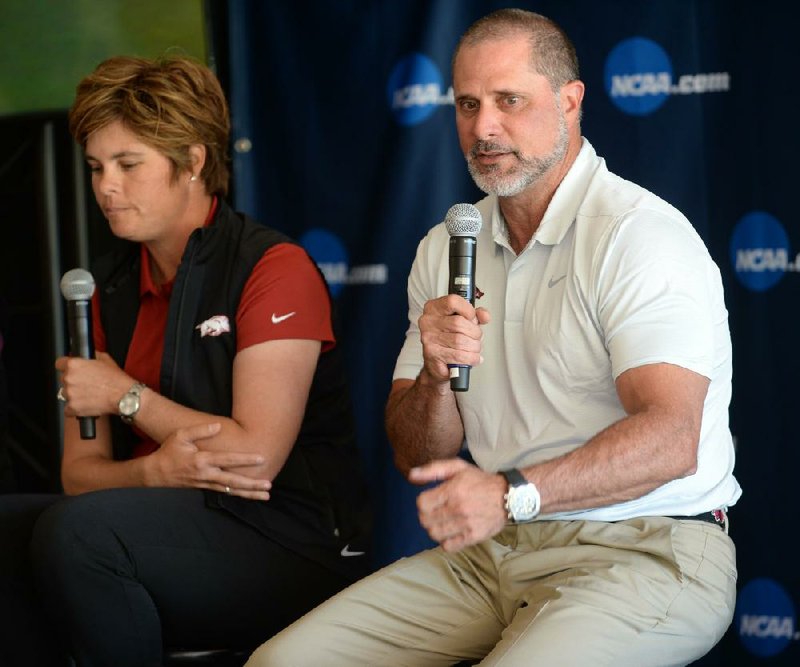 The fourth in a series detailing the back story on the hiring of Arkansas head coaches.

Brad McMakin pushed back in his desk chair at Blessings Golf Club and rubbed his crewcut when a reporter asked to go back to the day then-University of Arkansas athletic director Frank Broyles hired him as golf coach.

McMakin, who just finished his 14th season at Arkansas, still marvels at the way he landed in Fayetteville, insisting that he was trying to turn down Broyles for the entire two days of the interview process in 2006.

It points to the Broyles charm and his not willing to take no for an answer. He did that in hiring coaches when he was the Arkansas football coach, just as he did to recruits who tried to say no. He just wouldn't let them, and he sure didn't let McMakin.

McMakin has taken Arkansas to six NCAA fields, and the Razorbacks have won 28 tournament titles under him.

Five golfers who were recruited to Arkansas by McMakin -- Andrew Landry, Austin Cook, David Lingmerth, Sebastian Cappelen and Ethan Tracy -- have earned PGA Tour cards. Landry, Cook and Lingmerth have all won on the tour.

McMakin was in his 10th year as Lamar's coach when Broyles asked him to interview for the vacancy after Mike Ketcham resigned in the middle of a season. McMakin told him there was no need. The Oklahoma job was about to come open, and he was waiting on a chance to go back to his alma mater.

Under Oklahoma Coach Gregg Grost, McMakin was a sophomore when the Sooners won the 1989 national championship in Edmond, Okla., with an upset of top-ranked Oklahoma State.

Grost was instrumental in McMakin getting the Lamar job. McMakin, a native of Beaumont, Texas, signed with Lamar when Grost coached there, then followed him to Oklahoma. McMakin graduated from Oklahoma in 1991.

The Lamar storyline goes back to McMakin's prep days at Beaumont Kelly. He played for former Lamar coach Charles Rodemacher.

That's another reason it was a long shot for McMakin to leave for Arkansas. Just getting an interview from McMakin was a chore for Broyles.

"Coach Broyles convinced me that it would be good practice for the [potential OU] interview," McMakin said. "I came with my wife and told him again I wasn't going to take the job, but we went through the process anyway.

"The next day -- and my wife was waiting in the car -- I came to the Broyles Center to tell him no again. I was brought into a conference room with all the assistant athletic directors."

Lo and behold, Broyles introduced McMakin "as our new golf coach." He began to point to different administrators with specific assignments.

"When he'd made the last of the assignments, he turned and went out the door on the other end of the conference room. I was left standing there."

There was nothing left to do but go out to the car and tell his wife he had a new job.

"It was really incredible," McMakin said. "He was an incredible man with great vision and ability to do almost anything. I had no intention of becoming golf coach at Arkansas, yet here I was, his new golf coach. It was clear to me how much he loved Arkansas and golf."

"Oh, he did," McMakin said. "He came to hit balls at our facility almost every day and he would hit two big buckets. I told my players if they practiced as hard and as well as Coach Broyles, we'd be just fine.

"I'd give him lessons almost every time. He had a huge quest for golf knowledge. He absolutely loved the game, and I loved working for him. He was a really good ball striker, always."

One of McMakin's great thrills was going to Augusta National Golf Club with Broyles, who was a member. McMakin holed a double eagle on the par-5 15th while playing in a group with Broyles.

"Coach Broyles was more excited than I was," McMakin said. "He got out his phone in the fairway and started calling people to tell them I made a double eagle at No. 15. We waited a few minutes while he called a bunch of people.

McMakin got the call asking if he would take the Oklahoma job a few years later in 2009, but he was too happy at Arkansas to return to his alma mater where he was a two-year captain.

By then, McMakin and the Hogs were rolling.

Print Headline: McMakin was at UA bit sooner than later