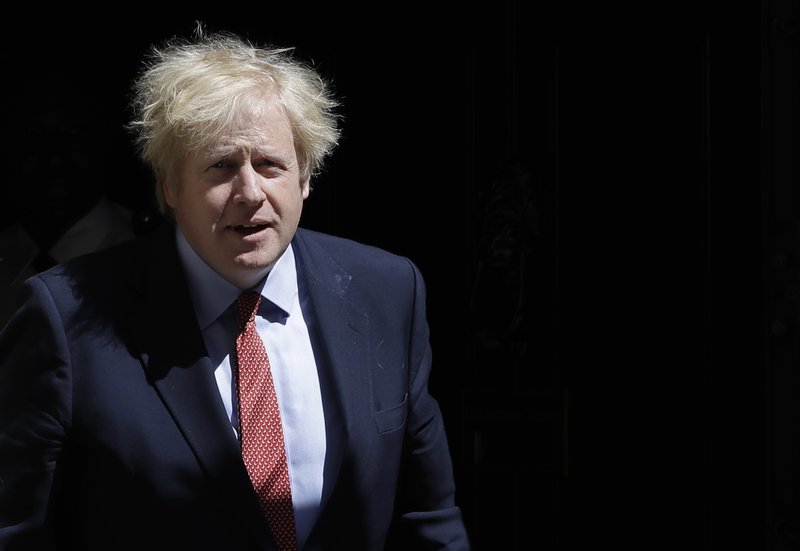 Britain's Prime Minister Boris Johnson leaves Downing Street to attend the weekly session of PMQs in Parliament in London as the country continues its lockdown to help stop the spread of coronavirus, Wednesday, May 20, 2020. (AP Photo/Kirsty Wigglesworth)

LONDON -- British Prime Minister Boris Johnson will not face a criminal investigation into whether he offered special favors to an American businesswoman during his time as mayor of London.

The Independent Office for Police Conduct ruled Thursday against a criminal investigation into Johnson's ties to tech entrepreneur Jennifer Arcuri.

The office, which oversees police complaints in England, was asked to consider if there were grounds to investigate him for misconduct in public office. Johnson has denied wrongdoing.

It said that while its review established that "there may have been an intimate relationship" between Johnson and Arcuri, "we found no evidence to indicate that Mr. Johnson influenced the payment of any sponsorship monies to Ms. Arcuri, or that he influenced or played an active part in securing her participation in trade missions."

A spokesman for Johnson welcomed the decision, calling the complaint politically motivated and the monthslong review "a waste of police time."

The case arose from a Sunday Times report that Arcuri's business was given thousands of pounds in sponsorship from an organization overseen by Johnson, as well as privileged access while on trade trips that Johnson led as mayor. Arcuri describes herself on her Twitter feed as an entrepreneur and producer.

The websites were defaced with anti-Israel material, the directorate said in a tweet. It advised the public not to click any links on these sites.

Hundreds of websites were affected, including those of companies, local government, and nonprofit organizations, with hackers replacing their usual content with a video depicting the cities of Jerusalem, Tel Aviv and Haifa in flames, Israel Hayom newspaper website reported. Messages including "The countdown of Israel destruction has begun since a long time ago" also appeared, it said.

UPress, an Israeli website storage company, said in a recorded message on its main telephone number that it had identified a "widespread" attack on websites that it stores, attributing the event to "anti-Israel, Iranian" hackers.

According to the Israel Hayom report, Check Point Software Technologies Ltd., a technology security developer, attributed the attack to a group of hackers likely from Turkey, North Africa and the Gaza Strip. The Tel Aviv-based company said that while others may have been active as well, it couldn't identify any Iranian involvement at this point, the newspaper reported.

LONDON -- The decision by Oxfam International to close operations in 18 countries in response to the devastating financial impact of the coronavirus pandemic was met with shock and sadness Thursday across developing countries where the aid organization has often been helping the needy for decades.

Oxfam, which currently operates in 66 countries and whose global work is coordinated via 20 affiliate offices around the world, said in a statement late Wednesday that it has had to accelerate and deepen changes that it was considering as a result of the pandemic.

"We've been planning this for some time, but we are now accelerating key decisions in light of the effects of the global pandemic," said Oxfam International's interim executive director Chema Vera.

The most notable changes involve its exit from countries around the world. Among those it is planning to leave are Afghanistan, Cuba, Egypt, Rwanda and Sri Lanka. It said 1,450 out of nearly 5,000 program staff members could lose their jobs and that there will be an impact on 700 out of its nearly 1,900 partner organizations.

Oxfam insisted that the changes will be phased and that its departure does not necessarily mean the end of its involvement in those countries. It said it will continue to advise local aid agencies and could launch fundraising events where and when needed.

Venezuela to escort in Iranian tankers

CARACAS, Venezuela -- Venezuela's defense minister said Wednesday that planes and ships from the nation's armed forces will escort Iranian tankers arriving with fuel to the gasoline-starved country in case of any U.S. aggression.

Defense Minister Vladimir Padrino Lopez said Venezuela's navy and air force will welcome the five Iranian tankers, seeing them through the nation's maritime territory and into port. He compared the fuel tankers with humanitarian aid that China and Russia have sent to help Venezuela combat the new coronavirus pandemic.

A force of U.S. vessels, including Navy destroyers and other combat ships, patrol the Caribbean on what U.S. officials call a drug interdiction mission. Venezuelan officials paint them as a threat, but U.S. officials have not announced any plans to intercept the Iranian tankers. Both countries have been hit with U.S. economic sanctions.