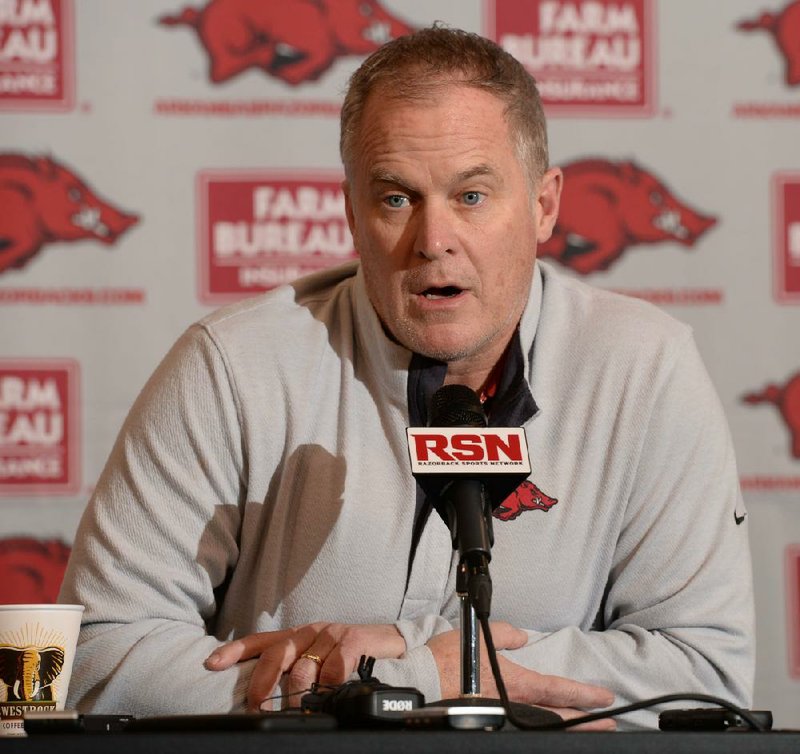 Hunter Yurachek, director of athletics at the University of Arkansas, speaks Friday, March 13, 2020, in the Touchdown Club at Razorback Stadium to address questions regarding the Southeastern Conference and the university's response to the coronavirus outbreak. (NWA Democrat-Gazette/Andy Shupe)

FAYETTEVILLE -- University of Arkansas Athletic Director Hunter Yurachek said Wednesday that the university has a plan in place to keep weight room and training room facilities sanitized if athletes are allowed back on campus on a voluntary basis June 1.

Yurachek made the remarks on a video conference with the UA board of trustees as schools in many parts of the country begin preparing for the projected return of athletes in early June. The SEC's plan to open facilities after the NCAA-mandated suspension of athletic activities ends May 31 dovetails with a vote from the NCAA Division I Council on Wednesday to allow voluntary activities for football and basketball on June 1.

Soon after the initial cancellation of college basketball tournaments on March 12 due to the coronavirus pandemic, the NCAA mandated an end of on-campus athletic activities through May 31.

Yurachek referenced a meeting of SEC chancellors and presidents scheduled for Friday that will discuss recommendations from health officials and likely make a decision on the June 1 opening date for the conference.

"We're hopeful to open up our facilities to fall sports on June 1, and that would be for football, women's soccer, volleyball and cross country, as well as returning men's and women's basketball players," Yurachek said.

He added that the plan for welcoming incoming freshmen features a potential July 1 starting date because residence halls on campus are not open.

"We have a really good plan that has been put together by our medical team, that includes our athletic trainers, our strength and conditioning coaches, our facilities and maintenance staff," Yurachek said. "We have worked with the environmental health department here on campus.

"We have reviewed and received guidance from the report the UAMS group put out, and the report has also been sent over to the Arkansas Department of Health to get feedback as well. So we feel really good about where we're at, and we'll be prepared on June 1 or June 15 or July 1 or whatever that date ends up being."

Board vice chairman Stephen Broughton asked Yurachek about what plans and considerations were being made in regard to fans.

Yurachek said the athletic department is working on guidelines for running shuttle buses to football games at Reynolds Razorback Stadium, and how fans pass through entry gates, queue for concessions and arrange in the stands.

"We're trying to go to a paperless ticketing system, so there's no exchange of tickets," Yurachek said.

He said the university is also exploring options on how many fans might be allowed to attend games, adding, "We're planning right now for full capacity. But we're also making plans for if that's a half or a third, based on some guidance, which continues to evolve.

"Then we also have plans for how we sanitize and disinfect our venues prior to, during and after each event. We're just trying to create a level of confidence for our fans if there's the ability to bring them back to our venues, that they're confident that we have and are mitigating the risk.

Yurachek also mentioned the possibility of fans having to wear masks to fall sporting events.

University of Arkansas at Little Rock Athletic Director George Lee told the board that the Sun Belt Conference ADs were looking at starting activities in June if it is permitted by the NCAA and public health officials.

"At Little Rock, we're not planning on bringing any student-athletes back at that point," Lee said. "We have about 10 to 12 student-athletes that are still on campus that would be working with our athletic trainers, our strength and conditioning coaches, our head coaches.

"We're making sure we have a comprehensive plan in place really to bring our men's and women's basketball teams back on July 1 if everything is right with the world at that point in time."

"I spoke to Commissioner [Charles] McClelland this morning, and at this time the Southwestern Athletic Conference looks at late June as a target to hopefully have some clarity as to how our fall season will look and the ability to compete in intercollegiate athletics," Peterson told the board.

University of Arkansas-Fort Smith Athletic Director Curtis Janz said NCAA Division II, in which the Lions participate, made legislative moves Tuesday "in which they've reduced the maximum number of contests in every sport. That just happened yesterday, so we're working through some of those things for some cost-cutting measures."

"We'll talk about these new maximums and how that impacts our conference play," McMeel said. "From there, it goes to the president's council."

McMeel had told the board in a previous meeting that a reduction in the number of football games in the Great American Conference had been a possibility, but he stressed the importance of playing football this fall and having a marching band on campus in terms of the financial impact of recovering from the pandemic.