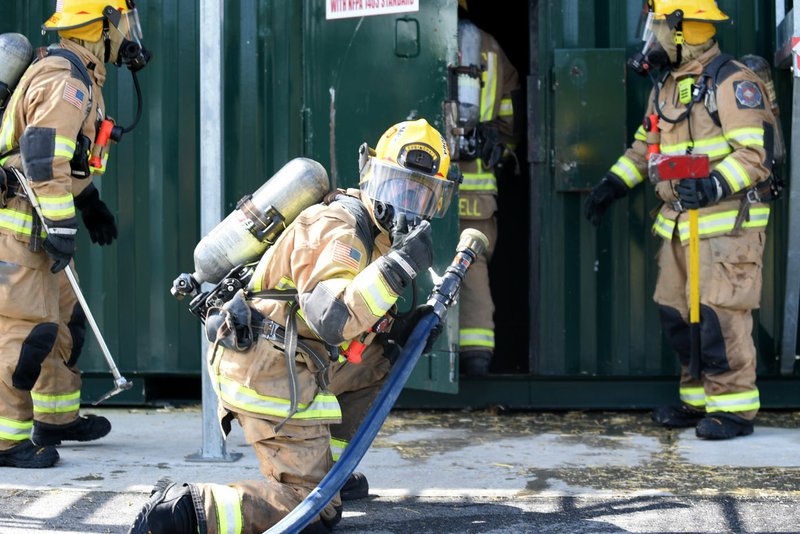 Probationary firefighters with the Springdale Fire Department prepare to enter the tower during training at the Mickey Jackson Fire Training Center in Springdale. (NWA Democrat-Gazette/David Gottschalk)

"The window opened and all of a sudden, there was this baby," Tanner Parker said, still with some disbelief and awe in his voice.

"I looked at my captain, and he said to take it."

Then Parker began the perilous descent fr0m a burning building, cradling a baby mannequin in one arm, hanging on to the ladder with the other and wearing about 40 pounds of firefighters' gear.

Parker, nine other probationary firefighters and 11 current firefighters trained as instructors spent May 6 running in to and out of a burning building. Parker is a probationary employee of the Lowell Fire Department.

Before a probationary firefighter can join a unit in Springdale, he must undergo fire academy training with the Northwest Arkansas Training Officers' Association, explained Capt. Pat Lee, assistant training officer for the department. But when Arkansas Gov. Asa Hutchinson limited group gatherings to 10 to fight the covid-19 pandemic, the Springdale Fire Department began to "home school" their trainees.

Normally, Northwest Arkansas Community College hosts the academy. Rogers Fire Department also had about 10 going through the fire academy and took their training upon themselves, Lee said.

The Springdale probationary firefighters will see a live burn every Wednesday through their graduation June 5, Lee said.

The young firefighters will face more training and then join fire crews at the stations as probationary firefighters for one year. On this day, they seemed tentative and even clumsy as they first pulled hose from the reserve engine to the ground floor of the smoking building. During the next burn, they handled them more like the professionals they will become. Among other things, they were learning how to breach the door, search for occupants and look for the source of the fire, Lee said -- and communicate over the radio, learning to keep the excitement in their voices in check.

"Communication is always hard through an air mask," Capt. Zedox Crabbe said. "And some of them were a little hard to understand. Even with the recent upgrade to the radio system, it can still be a challenge."

Crabbe served that day as the incident commander. His job was to understand the entirety of the fire event, through firefighters' radio calls.

The students reported when their crews encountered the fire, were ready to ventilate the room and found a victim. As the firefighters left the building, they also reported their crew mates, by name, were safely outside.

"I'm just trying to get everybody on the same sheet of music," Crabbe said.

The city built the fire department the Mickey Jackson Fire Training Center, a three-story structure made of shipping containers. Academy instructors can set many types and sizes of fires in the tower's controlled environment, Lee explained.

Various rooms, with features like windows and stairs, maybe some furniture and curtains, were all designed to give firefighters experiences they might face in a fire -- including 900 degrees of heat.

Even Springdale's veteran firefighters commit to regular training at the facility.

This day's scenario was a two-story residential fire.

Five teams of two probationary firefighters -- accompanied by one firefighter trained as an instructor -- were assigned specific jobs in each of the five burns. They were reassigned with every burn.

"What are you looking at when you go in, McGaugh?" asked Capt. Dustin McDonald before his team made entry.

"You're looking for smoke and how to make entry," replied Neil McGaugh, one of the probationary firefighters.

"You're looking at what they're doing," Battalion Chief Tom Pearson said of the team in front, breaching the door.

Throughout the academy, the instructors will impress on these future firefighters the urgency of the situations they face and the speed demanded of their reactions.

McDonald's next team of Cole Bohannon and Angel Sanchez were assigned to be the second fire-attack squad, with the added responsibility of search and rescue.

"I was rolling around and knew there might be a baby in the bedroom," Bohannon said. "It was in the crib, right below the window. I knew I had to get it out. I knew there was a window in that room, and I knew there would be a ladder at that window."

He opened the window and found the ladder and Parker, to whom he handed the mannequin.

"Every fire, there must be at least two ways to get out," Parker said. "So we put ladders at each window."

The trust of the team and their communication were two important lessons of the day.

After Bohannon and Sanchez exited the still smoldering building, McDonald asked them to imagine that baby was a 250-pound man. He also assured they would face that scenario later in their training.

McDonald also reminded them that if they can see their feet through the haze of smoke in the building, they can stand up and move around. It's quicker than crawling under the smoke without visibility, he said.

The day before the training fire, the probationary firefighters were found in a house on Spring Street. The city owns the house and soon will raze it to make space for the new Criminal Justice Center.

The day before that, they made doors out of windows at the house to ease evacuation. The day after the fire, they were chopping into the roof for ventilation.

Places for hands-on training -- which usually involves destroying something -- can be hard to find, Lee said. So any time he hears of a property the city owns and will remove, he asks to use it.

McDonald used a large saw to cut to cut a hole in the floor. Lee explained the saw was called a "Nance saw" or "Columbus saw."

The drill, with firefighters working to pull someone -- or themselves --through such a hole also bears the name of Nance.

"You're going to have to deal with it," Lee told the trainees. "You're doing these drills because somebody lost his life. When you get in this situation, we want you to revert back to your training. And we train you to be as safe as we can."

McDonald and Lee moved the drill to a different room of the house after thinking the floor in an addition wasn't structurally stable.

After the students cut a hole in the floor, Carson Ricker got the call. His classmates raised and lowered him through the floor for much of the morning. He straddled a charged hose line. He was cradled in the hose line. And, with webbing firefighters carry in the pockets of their turn-out gear, they hooked him through the straps of his air pack.

They pulled him out like he was awake and talking, unconscious or dead.

Ricker's escape from the hole was very unceremonious as the trainees knocked his helmet on the side of the hole. One of his classmates reached out a gloved hand to guide Ricker's head through the hole.

Then they ungracefully heaved him out and threw him on the floor.

All the probationary firefighters got their own rides through the hole that day.

"Your very first shift, this could happen," Lee said.