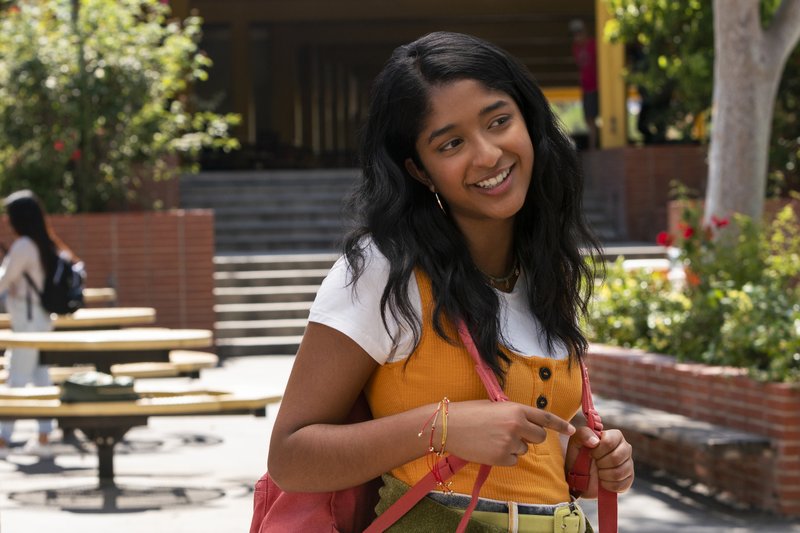 Maitreyi Ramakrishnan plays Devi in Mindy Kaling's Never Have I Ever. (NetflixLara Solanki)

What kind of jerk complains about a cuteness overload during an emotionally draining, nationwide stay-at-home war against a pandemic when people are watching all kinds of gentle junk just to get their minds off the bigger stuff? Who would take issue right now with a teen-focused romantic comedy that affirms cross-cultural experiences, subverts some stereotypes about immigrants and acknowledges a spectrum of desire in adolescent girls?

Um, I suppose that jerk would be me, the TV critic who just streamed 10 episodes of creator Mindy Kaling's cheerful but unfortunately mediocre Netflix comedy Never Have I Ever, and came away wishing the series lived up to the potential it so clearly set for itself.

Never Have I Ever

Instead of joining its more memorably provocative peers (I'm thinking of last year's beloved teen girl comedy film Booksmart), Never Have I Ever feels imitative and anticipated, like a college-application essay that is trying to be both glib and profound -- and happens to be narrated by the intemperate, 61-year-old tennis legend John McEnroe.

How McEnroe winds up being the omniscient voice in a present-day story about a self-conscious, Indian American high school sophomore is not as odd as it might seem.

On The Mindy Project, Kaling and Never Have I Ever co-creator Lang Fisher specialized in the same rapid-fire plots, quips and larky pop-cultural asides that tend to explain themselves and forge a bond with the viewer -- inside jokes that an audience can easily get, in the same clippy and there-and-gone style of like-minded, lightly absurd, never-too snide, medium-emotional comedies such as Brooklyn Nine-Nine and Superstore.

You should, is my reply -- they work extra hard to be liked -- conceived and produced as little rays of TV sunshine.

That's one interesting swerve that helps Never Have I Ever seem deeper, at first: Its main character, Devi, is often so self-absorbed that she can come off as petulant and dishonest, very much like a teenager preoccupied with the momentary ups and downs of social status, and not exactly someone the viewer is inclined to root for. Devi is played by newcomer Maitreyi Ramakrishnan, who brings a fine degree of spirit and believability to the role - outdistancing the often thin and predictable writing that Kaling, et al, have provided. The comedy here is fine; the deeper stuff (grief, alienation, obedience) gets the gloss treatment.

On the first day of sophomore year, McEnroe introduces us to Devi as she kneels before a shrine in her house and prays to the Hindu gods.

She prays that the past year was awful for a number of reasons. "So I thought of a few ways you guys can make it up to me. One, I'd like to be invited to a party with alcohol and hard drugs. I'm not going to do them, I'd just like the opportunity to say 'No cocaine for me, thanks. I'm good.' Two, I'd love for my arm hair to thin out. I know it's an Indian thing, but my forearms look like the frickin' floor of a barbershop. And lastly, most importantly, I'd really, really like a boyfriend, but not some nerd from one of my AP classes. Like a guy from a sports team. He can be dumb, I don't care. I just want him to be a stone-cold hottie who can rock me all night long."

Life has dealt Devi and her family some recent blows: Her father, Mohan (Sendhil Ramamurthy), had a heart attack and died while sitting in the audience of Devi's school orchestra concert.

In grief, Devi lost all feeling in her legs and spent the rest of freshman year in a wheelchair, disappointed that she is perceived mainly as the girl in the wheelchair. Then, just as suddenly, her legs recover (she stands up to get a better view of a cute boy) and she's walking again -- something she's eager to show the rest of the school. (This whole plot thread is unnecessary; I bring it up only to note the strangeness, and perhaps even the insensitivity to people who don't miraculously get up out of their wheelchairs -- an off note in a comedy that touts its diversity.)

Devi has spent the year growing more distant from her mother, Nalini (Poorna Jagannathan), a dermatologist with strict ideas, mostly cultural, about how Devi should act and behave. Nalini is baffled by her thoroughly Americanized daughter.

Never Have I Ever rather seamlessly juggles a lot of culture clashes at once -- some of which are ethnically based and some of which are about race and sex, but most of which are the far more ephemeral brushes with popularity at high school. The title of the series is structured around that familiar teen-confession game ("Never have I ever ..."), with episode titles reflecting Devi's utter lack of emotional and visceral experiences: Never has Devi ever "had sex with Paxton Hall-Yoshida" (the hottest boy in school, played by Darren Barnet); "gotten drunk with the popular kids"; "felt super Indian"; "been a big fat liar"; "said I'm sorry," and so on. Some of these milestones Devi achieves, others she awkwardly fails.

And although the show fulfills its obligation to be breezy and fun, mainly as a teen-centric piece of fluff, never does it ever stretch to become anything more than another Netflix nothingburger. And that's too bad, given the talent involved.