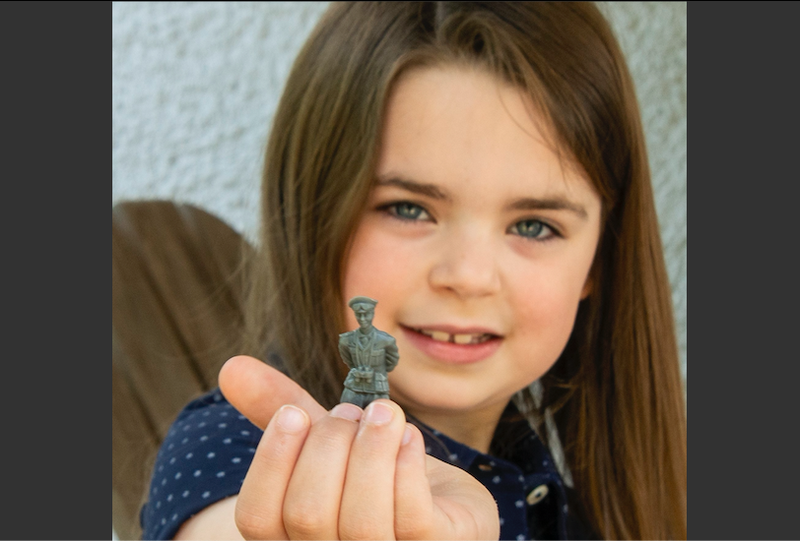 Pennsylvania toymaker BMC Toys is making a line of female Army toys after receiving a letter from Vivian Lord, 7, of Little Rock, who wondered why there were no women represented in plastic Army toys. Vivian will appear on NBC's Little Big Shots at 6 p.m. Sunday. The show features young people and their inspiring stories. (Arkansas Democrat-Gazette Cary Jenkins)

Little Rock has its own Little Big Shot. Seven-year-old Vivian Lord will appear in an episode of Little Big Shots, the NBC series hosted by actress Melissa McCarthy (Bridesmaids, Ghostbusters, Mike and Molly) that features young people and their inspiring stories.

The episode is scheduled to air at 6 p.m. Sunday.

Vivian, the daughter of Nick and Brittany Lord, is the little girl who wondered why women weren't represented among little green Army toy figures and wrote a letter to toymakers to see what could be done.

It all started when she was 6 and was on a trip with her family — which includes big brother Jackson — to Orange Beach, Ala.

On the porch of her Little Rock home, Vivian remembers when it first occurred to her that something was missing among the toys she was playing with that day.

"I was at the beach and I was playing with these Army men, and I saw that there were no women. It was weird because girls were in the Army too."

Vivian and Brittany checked Google and found the closest thing to female Army toys was a line of pink plastic figures, which were also men, and decided to write a letter to toy companies asking if they could make female Army toys.

"Why do you not make girl Army men," Vivian wrote. "My friend's mom is in the Army, too, so why don't you make them too? I saw the pink ones, but those aren't girls, and people in the Army don't wear pink. Some girls don't even like pink. So please could you make Army girls that look like women? I would play with them every day and my friends would, too. Thank you."

Brittany mailed the letter to three companies and response was, ummmm, underwhelming.

"At first, it was crickets," Brittany says.

But Vivian's story was getting out. She was featured on KTHV-TV, the CBS Evening News, CNN, and there were stories in The New York Times, this paper and other outlets.

Brittany eventually emailed a copy of the letter to Scranton, Pa.-based toymaker BMC Toys, and found out in August that the company will introduce a line of "Plastic Army Women" to its lineup of "Classic Army Men" toys this fall.

BMC President and owner Jeff Imel had actually been trying to drum up interest in a line of Army women and made a blog post about it on June 20, 2018, at the BMC website.

"I saw that letter, and I had an answer for them," he says earlier this month from Scranton. "I said that if I get enough people interested, I can move forward with it."

There was interest. BMC opened a Kickstarter campaign with the goal of raising $11,400. The effort easily surpassed that, eventually raising $55,401.

"Vivian's letter really pushed this forward much faster than I would have been able to on my own," Imel says. "It forced me to make a commitment that I would have been too afraid to without the media attention."

The toys will be made in Scranton, Imel says. "We have wrapped up the development side of it, and now we are in the meat-and-potatoes side of getting them into production ... so far so good for a fall release." 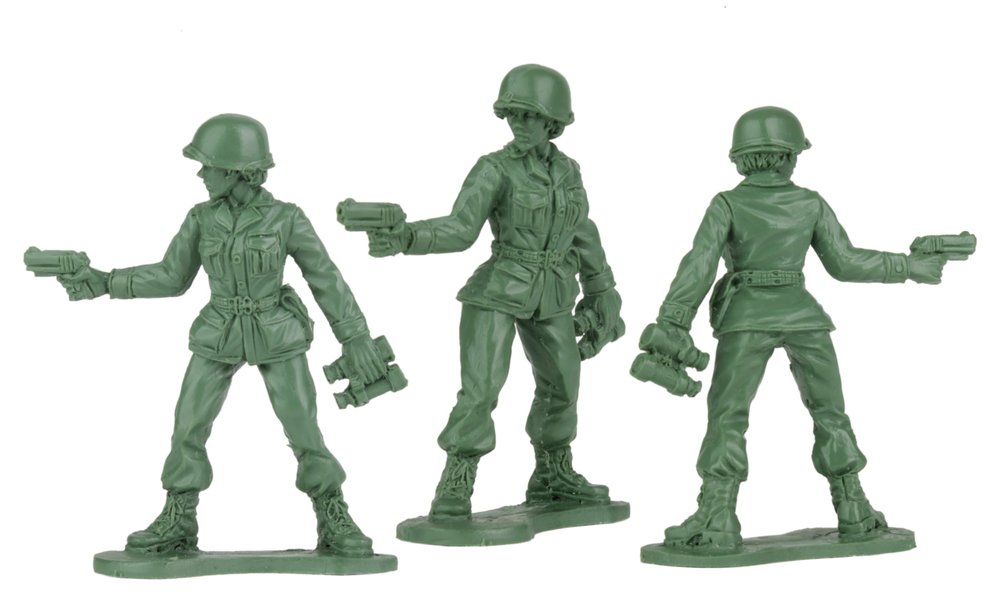 Pieces from a new line of plastic Army women toys by BMC Toys of Scranton, Pa., were inspired in part by a letter written by then 6-year-old Vivian Lord of Little Rock. (Courtesy BMC Toys)

"Yeah," says Vivian quickly when asked if she wants some of the toys when they are released. "I'm going to get packs of them."

Of course, she's got connections with the toymaker.

"I will definitely be sending Vivian a set," Imel confirms.

He points out that a lot of interest in the toys has come from women who grew up playing with male Army toys and who wanted female Army toys.

"To think that a little girl in the '60s or '70s was playing Army men with her brother and had the same feeling [that Vivian had], is really humbling. A lot of grandmothers and mothers are going to buy these to share with their granddaughters or daughters. It's nice to be able to close the circle on that childhood desire."

Brittany was contacted by Little Big Shots producers late last year about Vivian possibly appearing on the program, which is produced by Ellen DeGeneres, Steve Harvey (the show's former host) and McCarthy and has featured Connecticut "Kid Governor" Ella Briggs, 12-year-old singer Annie, aspiring package deliverer Parson, and Sara, who has no hands but won a national penmanship contest.

"I didn't want her to do it if she didn't want to, but I asked her about it and showed her some clips of the show and she was like, 'Yeah,'" Brittany says.

"It was a surprise," Vivian adds. "At first, I didn't know what the show was, but then she showed me clips and I was like, 'That's awesome, and we were going to meet Melissa McCarthy."

The Lords went to Los Angeles in January for the taping at Warner Bros. Studios.

"It was so cool," Vivian says. "They have filmed a lot of movies and shows there."

Jackson, 10, had a good time on the studio tour. 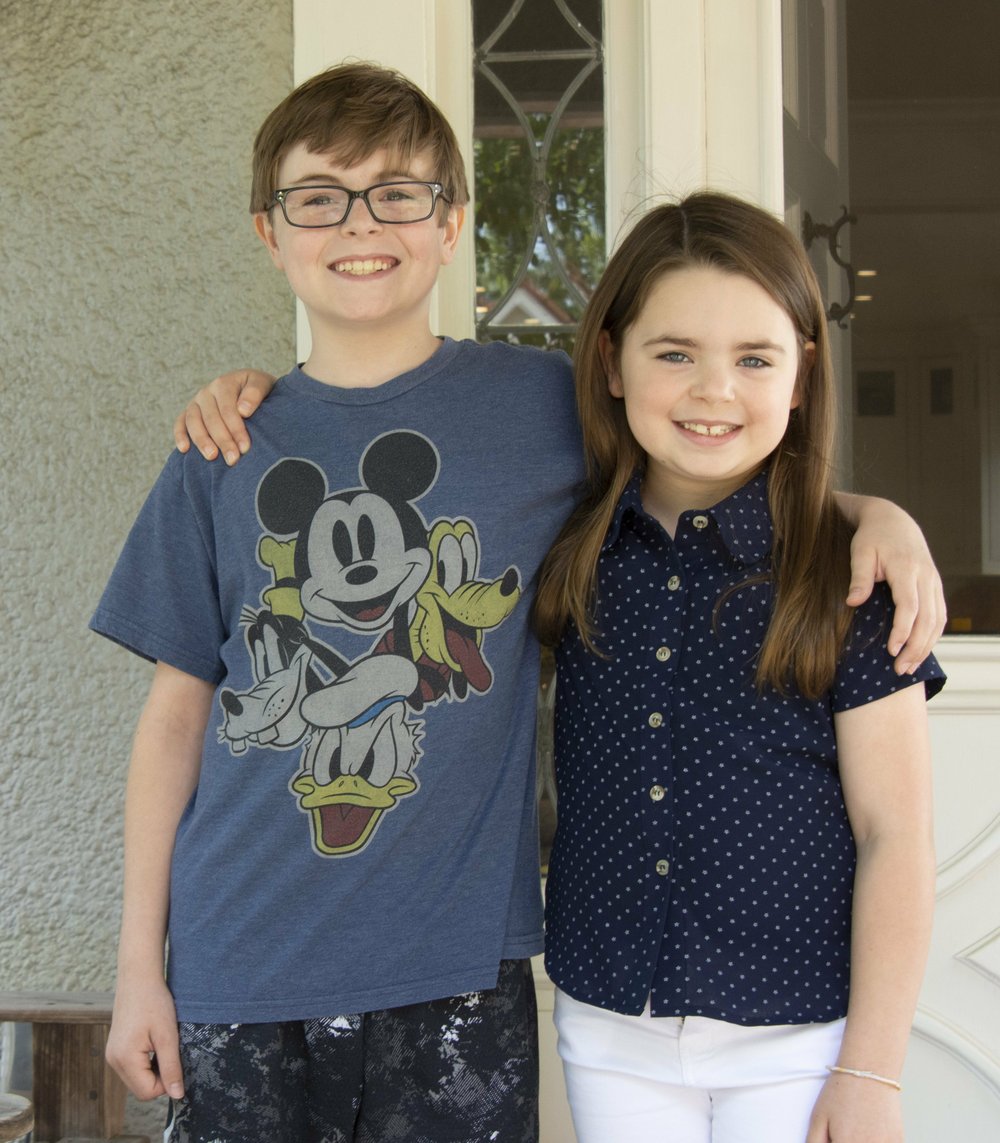 Vivian Lord got to share the spoils of her successful mission with her brother, Jackson, 10. (Arkansas Democrat-Gazette Cary Jenkins)

"It was really fun," he says. "I got to see the Batmobile. Also, Aquaman was made there, and the first Jurassic Park. And I saw The Big Bang Theory set and the Friends cafe."

Speaking of Friends, the studio where Little Big Shots is filmed is also where that beloved '90s sitcom was shot.

"That may have been a little lost on them," Brittany says. "But [Nick and I] were like, 'That's awesome!'"

Producers also made sure that Vivian got her schoolwork done while on set.

"We asked my teacher to give me my homework for three days," she says. "So I had to do all that homework at Little Big Shots."

Brittany says they can't discuss specifics of the episode, and they even had to keep their trip to the taping a secret but says the experience was a good one.

"I didn't know how Vivian would handle it, but she loved every aspect of it. She got to hang out with the other kids. I thought she would want to explore the city, and we did do a little bit of that, but she said 'I just want to go back to the set.'"

And while Vivian and Jackson have been out of school since the pandemic hit in March, they've been busy. The pair made greeting cards with encouraging messages like "Have Hope," "We Will Rise," "Stay Safe" and others that they sold in packs of five for $10, raising $600 for the Arkansas Foodbank.

"They saw that there was a need for the Foodbank and said, 'What can we do,'" Brittany says. "It blew me away."