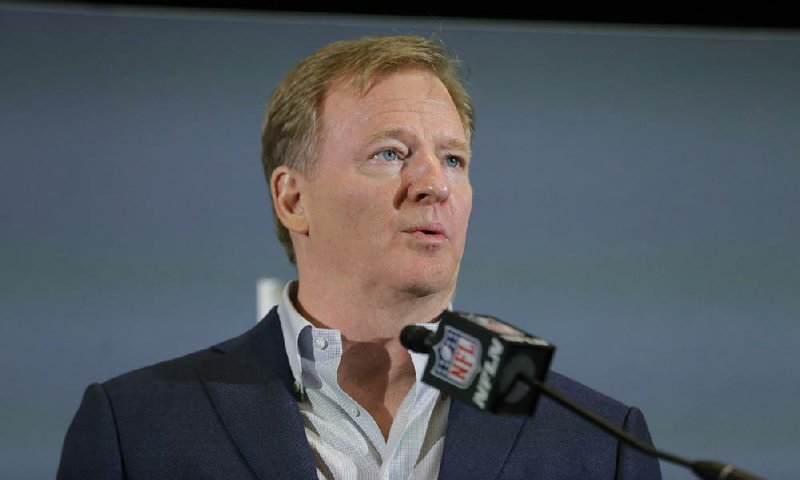 FILE - In this Feb. 3, 2020 file photo NFL Commissioner Roger Goodell speaks during a news conference in Miami. The NFL has set protocols for reopening team facilities and has told the 32 teams to have them in place by May 15. In a memo sent by Goodell and obtained Wednesday, May 6, 2020 by The Associated Press, several phases of the protocols were laid out. The first phase would involve a limited number of non-player personnel, initially 50 percent of the non-player employees (up to a total of 75) on any single day, being approved to be at the facility. But state or local regulations could require a lower number. (AP Photo/Brynn Anderson, file)

Horse racing's Triple Crown will look different this year from start to finish. The Belmont Stakes will be run before the Kentucky Derby and Preakness for the first time and take place at a shorter distance. It will lead off the Triple Crown on June 20 in New York with no fans in attendance and at a distance of 1 1/8 miles instead of the 1 1/2-mile length that has been the race's trademark for nearly a century. "The way it fits in the calendar, it's a completely different race than the traditional Belmont would be," New York Racing Association president and CEO Dave O'Rourke said Tuesday. "I think we're going to have a big field. I think it'll be a really competitive field. I think the dynamics of the race are different." The three Triple Crown races will be run out of their traditional order for the first time since 1931. The Kentucky Derby was moved from May 2 to Sept. 5 and the Preakness from May 16 to Oct. 3 amid the coronavirus pandemic that has upended the sports calendar. The Belmont will be run only two weeks after it was scheduled, but the shorter distance changes the complexion of the race and the Triple Crown. It has been run at 1 1/2 miles each year dating to 1926, and last ran at 1 1/8 miles in 1894.

Changes made to Rooney Rule

Changes designed to enhance opportunities for minorities to get executive, head coaching and coordinator positions were passed Tuesday by NFL owners. They include addendums to the Rooney Rule, which has fallen short in its goal of increasing diversity in the league. "We feel the package of steps and initiatives the owners fully supported today all will contribute to making progress in this area," Commissioner Roger Goodell said. "Most importantly, our work is not done. We continue to focus on a number of other initiatives and will continue to until we have greater success in this area." Because of the coronavirus pandemic, a conference call among the 32 team owners replaced the planned spring meeting. By the beginning of 2021, all clubs will be required to interview at least two minority candidates from outside the organization for head coach vacancies; at least one minority candidate for any of the three coordinator vacancies; and at least one external minority candidate for senior football operations or general manager positions. The Rooney Rule has been expanded to apply to a wide range of executive positions. Teams, as well as the league office, must now include minorities and/or female applicants in the interviewing processes for senior level front-office positions.

Tom Brady isn't letting the coronavirus pandemic -- or NFL rules against players working out at team facilities -- keep him from preparing for a new season with the Tampa Bay Buccaneers, his new team. Brady gathered some of his Buccaneers teammates on a high school field early Tuesday for a throwing session. Brady wore a Buccaneers helmet and an orange jersey over his shoulder pads. The informal, players-only workout at Berkeley Preparatory School lasted two hours, according to The Tampa Bay Times. Because of the pandemic, which has forced social distancing and sheltering at home as the new rules, any gathering of players is notable -- especially one involving Brady, a six-time Super Bowl champion with the New England Patriots. Brady, 42, signed a two-year, $50 million contract with the Bucs in March. Quarterbacks Blaine Gabbert and Ryan Griffin also threw passes. Among other players attending the session were receiver Scotty Miller, tight ends Cameron Brate and O.J. Howard, and running back Dare Ogunbowale. Teams cannot organize such workouts, and the Bucs did not publicize Tuesday's session. There was no immediate reply from the team to a request from The Associated Press for comment on the workout. 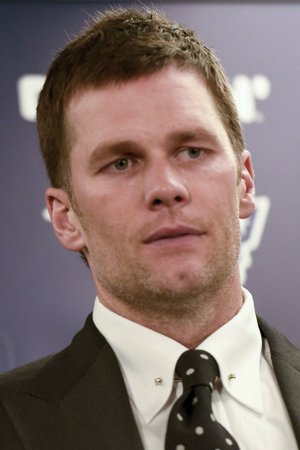 Print Headline: Off The Wire