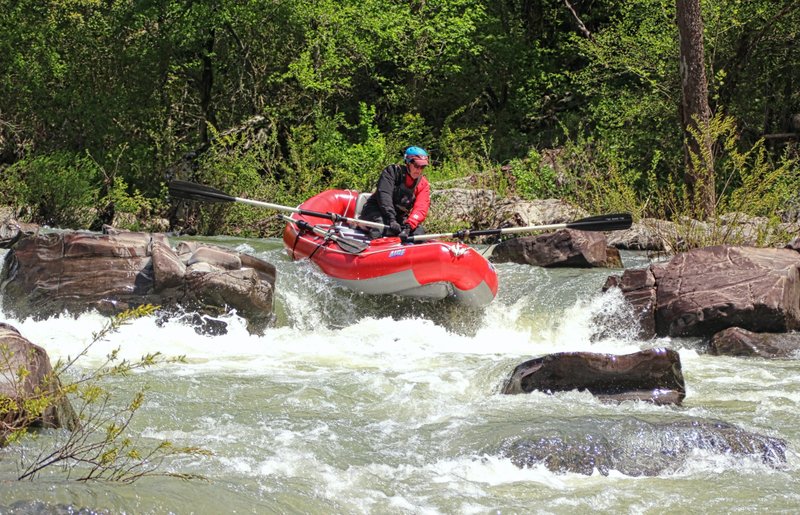 Rick Ramsay of Little Rock drops into Eye Opener Falls on the Cossatot River. (Special to the Democrat-Gazette/Bob Robinson)

"You should go rafting with me sometime," Stewart Noland said. This was last fall on an Ozark Society hike.

"Just say when and where," I eagerly responded.

Noland's from Little Rock and I live in Fort Smith, but his float trips are legendary among paddlers across the state.

The "when" turned out to be the fourth week of April, however, the "where" was still undetermined the day he called me. Rainfall had been cooperating, but he was watching river gauges and the forecast before making a decision. He'd narrowed the options down to Richland Creek and the Cossatot River. The coming night's rain would be the determining factor.

He would check the rain gauges in the morning and decide whether we would head for an Ozark or a Ouachita mountain stream.

I promised to be packed and ready to launch, be it to the north or south. Either stream would be a new float for me, and my first exposure to Class V rapids in The Natural State.

THE DAY HAS ARRIVED

"The Cossatot River is at a pretty good level after last night's rain," Noland explained at 6:30 a.m., April 26. Could I meet him outside the Cossatot River State Park-Natural Area Visitor Center at 9:30? The center — 9 miles east of Wickes in Polk County — was closed as a precaution during the covid-19 pandemic, but trails and the day use areas (except the playground) were open.

We arrived at the visitor center three minutes apart. Noland's Yukon was parked at the U.S. 278 turnoff, with a pair of inflatable rafts strapped on top of the trailer.

I followed his vehicle and a white Ford truck down the steep gravel road that continues past the center to our planned takeout, the old Arkansas 4 highway bridge. There Noland introduced me to Rick Ramsay, who was joining our Cossatot Adventure. Noland and Ramsay have been friends since their college days at the University of Arkansas, Fayetteville. Their wives were sorority sisters.

We left my RAV4 and Ramsay's truck at the takeout. Before we climbed into the enclosed confines of the Yukon, without having to say a word, each of us strapped on a face mask. It is amazing how quickly we have adapted to this new crazy world of covid-19.

It was only six miles upriver to our put-in ... as a smallmouth bass swims. By truck, it is an entirely different journey through a maze of gravel forest roads.

Arriving at the Ed Banks put-in, we jumped out of the cab and into action, unloading the rafts and gear.

I would be at the front of the raft, up close and personal with turbulent, splashing waves, and so I donned my farmer-john wetsuit and a splash jacket under my PFD. It was a warm and sunny spring day, but I knew water spray is chilly and also, in the event we capsized, the insulated clothing would be greatly appreciated.

As we slid the rafts down the concrete shoulder of the low-water bridge, climbed aboard and then gently drifted into a steady current of sparkling emerald green water, Noland and Ramsay remarked on the water level with pleasure. Gauges had stood at 4.3 feet when Noland checked at 6 a.m., but the 'Tot (as regulars call the river) was rising, fed by swollen tributaries such as Flat Creek, which poured in across from our put-in.

As its muddy waters emptied into the greenish waters of the 'Tot, Flat Creek's brown stream hugged the shoreline for another hundred feet before melding with the clearer waters of the larger channel.

This was the maiden voyage of Ramsay's raft. It was a newer model of the Aire Super Puma raft that Noland rowed and a bright red, as opposed to the older green model. Ramsay was the proverbial smiling kid with a new toy.

When he approached the 4-foot drop of our first named rapid, the Class III Zig Zag, Ramsay smoothly eddied out to pause and plan his line, then skillfully guided the craft between a pair of giant rock sentinels at the lip of the falls and snaked through the jutting rock garden below.

As we settled in during the first two miles, Noland related the history of the river. I doubt many people know more about how the Cossatot became a National Wild and Scenic River or the making of Cossatot River State Park-Natural Area than the man who was my captain for the day. Noland's 15 years as Ozark Society president overlapped much of that period.

People began talking about establishing a Natural Area along the upper Cossatot River in 1974. Eventually, the Arkansas Natural Heritage Commission contacted Weyerhaeuser Co. to discuss buying land that bordered the Cossatot. Weyerhaeuser responded positively but was concerned the commission did not have the resources to oversee what would be an active recreation area.

Discussions continued for years. Noland remembered how he and society members gave heritage commission associates tours. They would show off the natural vegetation, rugged topography, unique exposed rock formations and the sparkling water. One visit, they led visiting associates to a forested area where clear-cut logging resulted in a mudslide washout. Weyerhaeuser as a whole did a good job managing the forest, Noland said, but the sight of that washout illustrated the urgency of the need for a preservation policy.

In the 1980s, Arkansas State Parks joined the effort to protect the river corridor. State Parks and the heritage commission prepared a joint proposal (a first for them) that addressed Weyerhaeuser's concerns. They decided that the Nature Conservancy would acquire and hold the land until state money became available to buy it.

In 1988 the Nature Conservancy transferred management of the area to the state, with State Parks and the commission sharing that responsibility.

The Cossatot River is a rockier float than I have experienced while paddling other waterways within the Natural State.

These are Ouachita Mountain region sedimentary sandstone rocks from the Mississippian Stanley Formation, originally deposited in flat-lying layers. Some time during the creation of the mountain range, these layers were lifted up and compressed northward. Jagged layers now jut out of the stream like the bow of a sinking cruise ship.

The first two miles of our float held Class II-III rapids, which included ledges and boulder-strewn cascades. The degree of difficulty drastically increased as we approached Cossatot Falls.

Noland says this one-third of a mile rivals whitewater found anywhere between the Appalachians and the Rockies. He should know. A river runner since he was a Boy Scout, he has floated Idaho's Salmon River, the Colorado River through the Grand Canyon in the West and many whitewater rivers in the East.

He says there are difficult waves to row on the Buffalo River's Hailstone rapids and at upper Richland Creek, but these are not straight 300- to 400-yard chains of difficult rapids, one after another. Cossatot Falls comprises six such connected rapids.

Many believe this area inspired the name Cossatot, which is of French origin, meaning "skull crusher."

As we approached the falls, Noland and Ramsay steered to the left bank to scramble ashore. Noland patiently explained there is a traditional line for running 'Tot Falls; however, the route you choose must be dictated by the water level. He always stops to climb atop a boulder for a visual reconnaissance before running the falls.

They decided that, given the high water, they would forgo the traditional line on river right at Eye Opener, slip through the five-foot falls on the left and drop into its large hole at the bottom, thus providing a straight shot at B.M.F. rapids. From that point, they would follow the traditional line through Washing Machine, Whiplash and Last One.

We had a plan.

I had seen videos of paddlers battling these challenging falls and even watched from the shore. Now I was about to experience them firsthand.

At the front of the raft, clutching the frame on each side, I felt our acceleration and let out a "Yee-haw!" as the craft dipped its nose into violent whitecaps at the bottom of our five-foot plunge. That was indeed an Eye Opener.

With even more momentum from Eye Opener, we swept over the freefall of B.M.F., kicking up a wall of water that totally drenched me.

Noland had warned me that rafting would be entirely different from the kayaking and canoeing I was accustomed to. "You point the raft where you don't want to go, then you back up," he said.

Following this rule, Noland aimed the raft head-on at a large boulder that guards the entrance to Washing Machine, a true Class V at this river level. But then he pulled hard on the long oars to back the raft up.

In the bow, with raging water crashing at me over port and starboard tubing, I felt as well as saw all the action. Noland again expertly maneuvered us forward in the direction of the boulder, then pulled hard on the oars to back up again. It was a surreal feeling as we sat surrounded by volumes of turbulent water rushing past the raft, and yet we remained somewhat stationary.

When Noland had found the groove he was searching for, he stopped rowing, and we plunged into a 7- or 8-foot drop that ended by burying the nose of the raft in towering reverse-wall waves, at which point Noland performed a sharp right turn, maneuvering us out of the potentially dangerous Washing Machine Hole.

"Wow!" What a rush of adrenaline.

We tied off the raft alongside a boulder and clambered out to watch Ramsay work Washing Machine like he owned it. After him, a group of kayakers and an open-boat canoe challenged the rapids.

Several other spectators perched on the boulders, enjoying the action. The area is easy to reach from the 14-mile River Trail on the immediate shore.

Shortly after the falls, our party pulled out on river left for a lunch break at Dead Dog Beach, and to share perspectives on the adventure of running that exhilarating string of rapids.

The remainder of our float was relaxing — even though it included more towering waves, major rock obstacles and a 6- to 8-foot drop at Devil's Hollow Falls.

With Noland and Ramsay making it look easy, I sat back and enjoyed the beauty of the area, thankful for the efforts of everyone involved in preserving this natural environment. Noland put it best when he said, "It takes a lot of strong public interest to get this sort of thing accomplished."