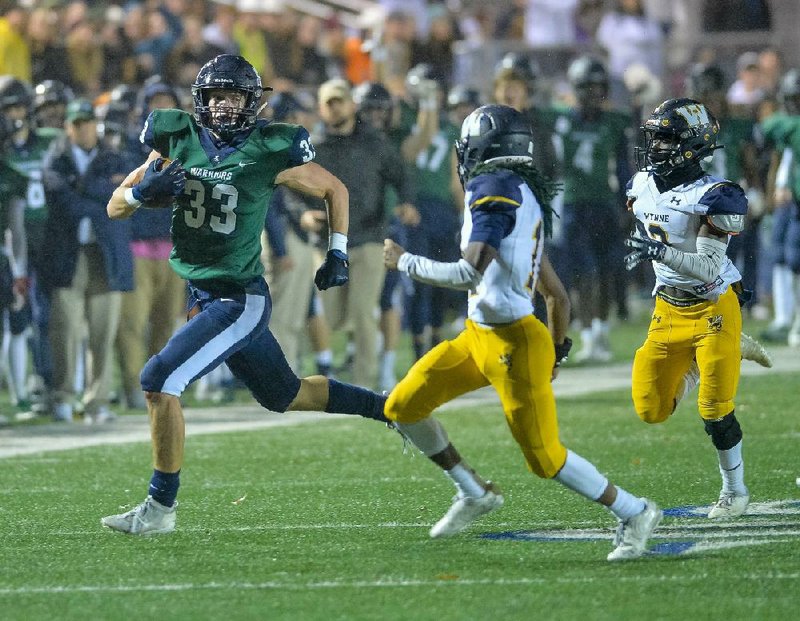 Former Little Rock Christian standout Jackson Woodard, who is walking on at Arkansas, has seen his weight rise from 198 pounds to 229 since the coro- navirus pandemic started in March. Woodard has attributed the increase to a weightlifting program that has not cost him any speed. (Special to the Democrat-Gazette/Jimmy Jones)

FAYETTEVILLE -- The spring has been full of change for Jackson Woodard.

Woodard, who signed to play football at Arkansas as a preferred walk-on linebacker, was pitching, playing second base and hitting cleanup for his baseball team at Little Rock Christian when the covid-19 outbreak shut down sports in March, ending his high school playing career.

At the time Woodard, who is 6-3, weighed 198 pounds, big for a middle infielder, but rather light for an incoming SEC linebacker.

"I was trying to put on weight during school and during baseball, and it wasn't really working," Woodard said.

Fast forward two months and Woodard is weighing in at around 227 to 229 pounds, depending on the day, while eating more protein and working out more than ever. He has seen significant increases across the board in his weight lifting and other exercises.

Woodard recently hit his goal of a 320-pound bench press and is squatting "in the upper 400s." If you show up at the right time in his family's Little Rock neighborhood, you might see him pushing or pulling his mother's car on the street in front of his house.

If there is a workout available, Woodard likely will do it. He has been working out on the sand volleyball court at a nearby church and running the neighborhood's hills with his younger sister, Sunnie, a cross country athlete.

"His workouts, just watching them wears me out," said Ernie Woodard, Jackson's father. "It's not a 45-minute workout. It's an hour-and-a-half workout and multiple body parts he's working at one time.

"It has been pretty amazing to watch his transformation."

Most importantly, Jackson Woodard said he has added weight without sacrificing his speed, something new Arkansas linebackers coach Rion Rhoades wanted him to strive toward.

Rhoades was the one who offered the preferred walk-on spot in January, shortly after he was hired to Sam Pittman's staff. The coaches liked Woodard's film from his senior season when he recorded 153 tackles, 2 sacks and 4 forced fumbles on a state runner-up team.

"I was talking to Coach Rhoades the other day and told him I hit 229 and he was laughing because he thought I wouldn't hit that until I was a sophomore," Woodard said. "He wanted me to get to 210, 215, and I surpassed that.

"I didn't know if I was going to be able to be as fast, but as I've gained weight it almost seems like I've gotten faster, especially these past two weeks. Now that I've got my weight, I've emphasized speed and conditioning. It's going really good for me."

Woodard has made his strides from his home and with his family's help. About four years ago his father bought a weight rack for Jackson and his older brother, John, that was similar to what was in the workout area at Little Rock Christian.

In addition to running with his sister, Woodard has lifted weights during the quarantine with his brother, who will be a junior at the UA in the fall.

"He actually lost about 30 pounds and I put on 30 pounds," Woodard said.

In the evenings it isn't uncommon to see the Woodards working on football moves at a nearby field.

"We'll do different drills, put cones up, and I'll act like I'm sitting at linebacker position," Woodard said. "They'll put the ball down and I'll sprint, act like I'm making the tackle."

Other drills include pulling his dad while being strapped to resistance bands.

"I feel like a plow mule being pulled around," Ernie Woodard said. "I try to keep up with him as best I can, but I'm ready for him to get up to Fayetteville and work out with some boys his own size.

"He's done a lot of cross training, different types of training to put himself in different situations and work his body in different ways. He's self-motivated, too, which is what you want for your kids."

Staying home during this time was important for the Woodard family because of its work in the medical field. Ernie Woodard is an oral surgeon and his wife, Tacy, is a periodontist.

Non-emergency procedures were halted during portions of March and May, and all of April, but Ernie Woodard had to be prepared to see patients on an emergency basis.

"With me working around patients ... we were like, 'OK kids, we ain't going anywhere,'" Woodard said. "They were really on lockdown. That kind of allowed him to be focused in on, 'OK I can't do anything else. I'm going to work out.'"

"Without these goals that I've set and without being able to wake up and have my routine and know what I'm going to do every day to get better, it would have been tough," he said. "I just told myself, 'I'm going to get 220. I have all this free time, I need to set this routine, I need to maximize the time I've been given.'

"It's been very encouraging and very fun to see me gain the weight that I was supposed to. Looking ahead it's awesome knowing I'm not going to be 198 going up there [to Fayetteville]. I'll be bigger than some of the linebackers up there."