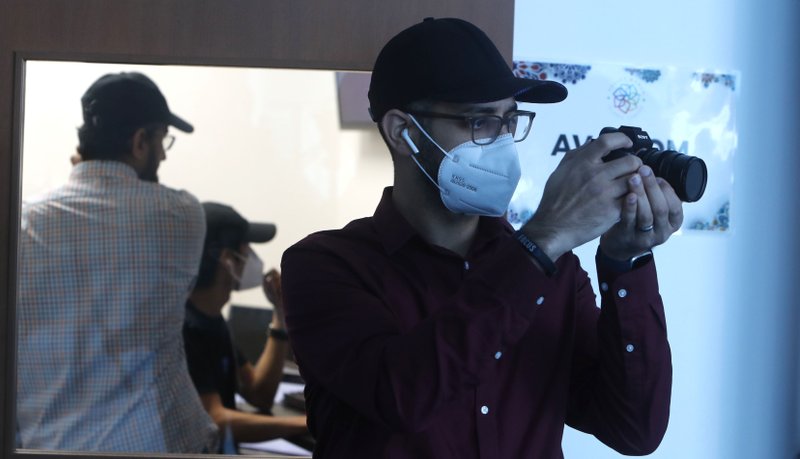 From the Vatican, to a village church, to mosques and temples, shuttered places of worship are streaming religious services for those seeking spiritual help and connections with others during the pandemic.

Vaishno Devi, one of India's most revered Hindu shrines, is livestreaming prayers.

"We are missing the pilgrims, their hustle and bustle. Their slogan-shouting used to infuse new energy into us," said Amir Chand, a priest at the temple. "But ... in the present scenario, it is better to stay home, and therefore, we also advise the devotees to stay home and enjoy prayers."

At Jerusalem's Western Wall, the holiest site where Jews can pray, prayers went online. The three daily Jewish prayers were broadcast on several platforms, garnering millions of views from around the world, according to Yohanna Bisraor, a spokeswoman for the Western Wall Heritage Foundation, which administers the site.

Most synagogues in Israel are Orthodox, which typically do not allow livestreaming on the Jewish Sabbath, when turning on electronic devices is forbidden. More liberal congregations, though, have embraced online prayer.

Jerusalem's Al-Aqsa Mosque, the third-holiest site in Islam, has been streaming prayers throughout the Ramadan holy month.

"In normal times, you see hundreds and thousands of people praying behind you and you can feel it when they say, 'Amen,'" said Sheikh Youssef Abu Sneineh, the mosque's imam.

Omar Suleiman, an Islamic leader in Irving, Texas, said YouTube videos uploaded by his Yaqeen Institute for Islamic Research had 30 million views for all of 2019 and have received 20 million in just the past six weeks.

"People in general, I think, are looking for more meaning and spirituality in the midst of all this," Suleiman said. "So I think there's just a general increase in religiosity and consumption of religious content."

Online viewership of Pope Francis "has grown significantly," Vatican spokesman Matteo Bruni said in an email. Francis' television audience also has increased, including during his celebration of Mass every morning to empty pews.

"The numbers indicate that even people who would not have participated in religious services on a daily basis in the past are attending a Mass every morning and listening to the pope's daily reflection on the gospel," Bruni said.

"It's really hard to talk to the camera for a long period of time, especially to give something that's meant to stir emotionally and intellectually and spiritually," said Suleiman, the Islamic leader in Texas, who records on an iPhone perched on a stand. "I think I'm getting better at it because I'm getting more used to it."

The pope has a more sophisticated setup, with Vatican staffers -- most working from home -- producing his homilies live, online and in a downloadable booklet in five languages, Bruni said.

With countries starting to relax restrictions, the pope will celebrate his last livestreamed Mass on Monday. Some conservative Catholics have blasted the suspension of Masses and inability to receive the Eucharist.

After some normalcy returns, places of worship will need to decide how far to dial back their online presence.

Information for this article was contributed by Nicole Winfield, Biswajeet Banerjee, Mari Yamaguchi, Josef Federman and Tia Goldenberg of The Associated Press