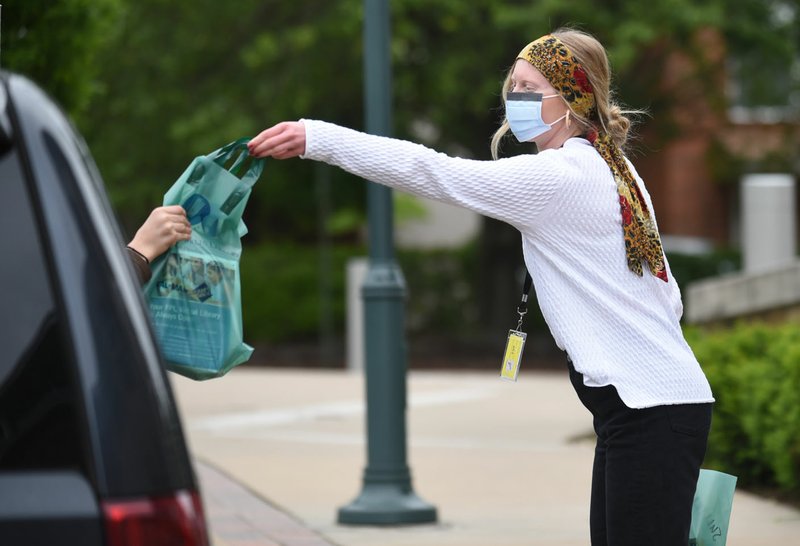 Erin Farrah with the Fayetteville Public Library brings out library materials for curbside pickup at the facility in downtown Fayetteville. (NWA Democrat-Gazette/David Gottschalk)

There is little doubt that the Fayetteville Public Library is an integral part of the community it serves. According to the organization's 2019 final budget document, the library recorded nearly 90,000 program participants and checked out over 1 million books to the public as of the third quarter of 2019. That's why, says Library Director David Johnson, the March decision to close the doors in the face of the impending pandemic was such a difficult one.

"But when all of the data points started lining up, and we began seeing other governmental institutions begin to shut down -- we do value our patrons and our staff, and we knew it was the right thing to do," says Johnson. "And at the same time, closing a building that's designed for the public, with a staff who live and breathe to serve -- it's a very, very tough decision to make. But you do it for your staff, and you do it for your patrons, and, at the same time you instantly flip to a whole new set of thinking: 'How can we best continue to serve, given the new guidelines we have in place?"

Library Director David Johnson says that an unintended consequence of the library closing is that construction on the new part of the facility has been slightly accelerated; last week, the hole in the floor that will eventually be the hallway that joins the new library to the existing building was created. Johnson says that, while the global health crisis has slowed production on some materials for the building, right now, he anticipates that the new building will be ready on schedule, in the fall of 2020.

Johnson says that his entire staff has worked hard to determine the answers to that question. What they came up with is a host of services delivered virtually and via phone -- as well as an innovative, safe, in-person way for people to continue to check out books. Johnson says they've pivoted so quickly, and so successfully, because of a culture of "yes" that permeates the staff.

"We begin all of our negotiations and ideas at 'yes,'" says Johnson. "We may work our way to 'no', but we always embrace new ideas. So if staff would come up with creative ways to do story times from home or lead book clubs from home [the library would figure out a way to do it].

"It's just been an evolving process."

Paramount among their goals was figuring out a process through which books could continue to leave the building. They managed to solve that problem by offering curbside pickup. Library patrons may reserve items through the FPL website or by calling 856-7000, and library staff will call to schedule a pickup time. Johnson says that nearly 700 FPL patrons have used the service so far.

"I look at people who choose librarianship as a career," says Johnson. "When you're built to serve, you're eager to do it. And it's something that is meaningful and has an impact on people's lives. Even if they're just reading a Stephen King novel for entertainment -- it doesn't matter. At a time of high stress, you're giving something for people to be hopeful about."

Johnson says FPL staff is following instructions from the CDC and the Institute for Museum and Library Services in order to safely quarantine and decontaminate material being returned, a process that includes a three-day period during which no staff member comes in contact with the material prior to disinfecting it.

If picking up materials curbside is not an option, patrons also have access to online resources like e-books and audio books. FPL and Fayetteville Public Schools partnered on the I-Card project, issuing one to every public school student in order to ensure that overdue library books and/or outstanding library fines would not prohibit kids from having access to electronic materials.

"There are a lot of people who are calling about job searches -- places where they can go out and find opportunities for employment," he says. "We're getting a lot of calls on genealogy. People have time on their hands, and they've now taken up one of the fastest growing hobbies in America, so our genealogy department is getting a lot of good questions. There are a lot of questions coming in to our nonprofit resource center, many people trying to figure out how they continue to thrive when the economy is throttled back. It's just a healthy across-the-board mix of all kinds of questions."

The FPL's service has gone far beyond simply providing library materials and information, however. Another FPL/FPS joint project is the distribution of meals to Fayetteville students, which takes place right outside the library every Tuesday. When they realized that it wasn't only students experiencing increased food insecurity due to the pandemic, says Johnson, the FPL staff brainstormed ways they could help.

"A group of volunteers from the staff went to the Pack Shack and packed 1,000 meals," he says. "And now, on Fridays, we offer free meals to adults. It's just like our curbside service -- they can call and make an appointment, and we'll meet them out at the curb with their meal. That's another way we felt the library could jump in and serve."

And, says Johnson, when they read about the alarming decline in blood donations, FPL staff organized a by-appointment-only blood drive in conjunction with the Red Cross.

One area where Johnson and his staff continue to brainstorm in the hope of reaching a solution is how to provide the public with computer access.

"I was fortunate to be on the Mayor's Digital Inclusion Task Force, and, when you begin looking at the numbers, I think we make some great assumptions around access to broadband from home," he says. "We assume every home has broadband and a computer, and that's just simply not the case. When the library's doors are open, our computers are full all day long, and those are people who don't have access to a computer or broadband in their home. We knew when that access got cut off, we were not going to be able to reach those patrons. We did enhance our Wi-Fi so that we're broadcasting all the way across Mountain Street and across School Street, so anybody can come and be adjacent to the library and have free Wi-Fi."

Johnson says he and his staff are determined to continue to adapt as the situation evolves. Though the FPL staff is eager to open the library's doors, he says when they make the decision to do so, it will be with an eye towards serving the public in the safest way possible.

"Everybody likes to talk about how special this library building is," he says. "And I would argue that what's special is the people who work here. This library staff are probably the best librarians in the world. They are built to serve, and they're always keeping their finger on the pulse of the community. They're looking ahead, they're listening to the news, and they're finding those things that are important for people and figuring out, 'Hey, how can the library provide that?'"

Print Headline: Beyond The Books