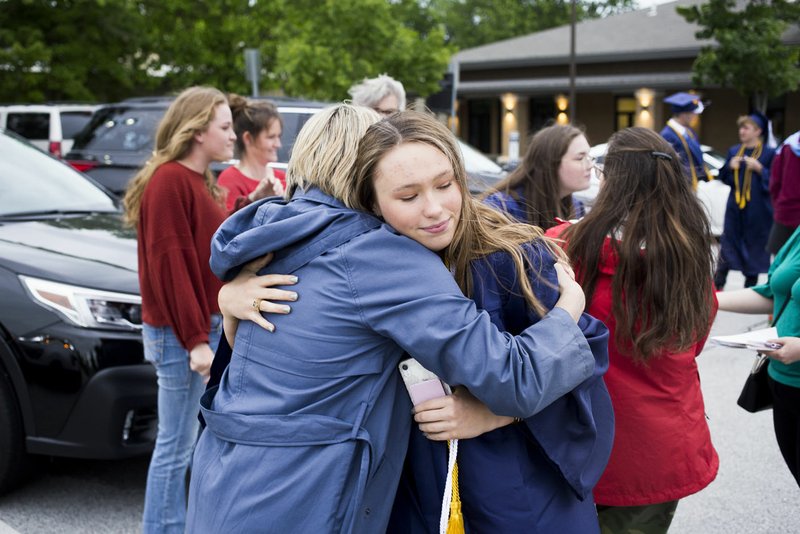 Kimberly Parker (from left) hugs daughter Cammie Parker on Friday during graduation at The New School in Fayetteville. The school celebrated its first graduation in a hybrid online/in-person ceremony. The senior class has of 11 students. The ceremony was outdoors where graduates and their families, the only guests in attendance outside of essential faculty and staff, were restricted to spaces within safe social distances to view recorded programming and to allow graduates to accept their diplomas one at a time. Go to nwaonline.com/200516Daily/ for today's photo gallery. (NWA Democrat-Gazette/Charlie Kaijo)

FAYETTEVILLE -- A pandemic couldn't stop The New School from holding its first high school graduation ceremony, albeit in a different way than was originally planned.

Nancy Lang, the head of school, said during the ceremony she was heartbroken the teachers could not be at the graduation in person. She waved to a teacher she saw watching the ceremony from the end of the school's driveway. Lang called the graduates' names, and they each picked up their diploma, walked on stage and posed for a photo.

Each of the students recorded a message telling their teachers, classmates and families about what the school meant to them and their plans for the future. The audio played at the ceremony as several photos of each graduate appeared on the screen.

Graduates and their families were the only guests allowed besides essential staff members. The ceremony was broadcast live for others to watch from home.

The New School opened in 1971 with 24 preschoolers. The nonreligious, independent private school enrolled about 380 children in preschool through 12th grade this school year.

[Don't see the photos above? Click here to the gallery.]

The school went through eighth grade until 2016, when officials decided to add a high school, adding one grade level per year. A few new buildings were added to the campus to accommodate the growth.

Cammie Parker, 17, of Bentonville is the only 2020 graduate who attended The New School from preschool through high school. She's on her way to the University of Missouri with plans on entering the medical field.

Before the school expanded, there were many kids who wished they could stay there through high school, she said.

"It's nice to be part of that first class and show others what it's like and that The New School is the place to be," Parker said.

Her favorite memories of high school are class trips. They traveled to Colorado as ninth-graders and to New York City as 11th-graders.

Stella Greenhill, 17, of Siloam Springs attended The New School for seven years. She started in fifth grade, switched to a different school for eighth grade, and returned for ninth grade. The New School is a 45-minute drive one way from her home.

She's enrolling this fall at the University of Arkansas to study studio art, and will be part of the university's Honors College.

Seniors worked with Lang to come up with a graduation plan. Greenhill said she was happy with the plan and the chance to spend some time with the people with whom she's grown up.

"For a while it looked like we might have to do some kind of sad Zoom call," Greenhill said.

Tysen Barbour of Fayetteville is on his way to the U.S. Military Academy in West Point, N.Y., with thoughts of a career in either the military or politics.

His senior year was his third at The New School. He enrolled when his mother, Angie Barbour, was hired as a physical education teacher. He previously attended Farmington High School.

"It's a fantastic school with just amazing teachers that want nothing else but to help you make sure you can do well in their classes, because they see in the future you will need those skills in the real world," he said.

Barbour, 18, said he was glad to have a chance to graduate now while public schools must wait. State officials announced last month public high schools may not hold traditional graduations before July 1. They will reevaluate that date as it gets closer. Most public high schools in Northwest Arkansas have set July graduation dates.

The New School began discussing graduation options in March, as soon as schools closed because of covid-19, Lang said. Officials announced the plan at the end of April.

"We wanted to make sure we had approval from law enforcement before we made it public," Lang said.

The school decided to keep its original graduation date rather than postpone it to when they might be able to do a traditional ceremony.

Two of the 11 seniors were unable to make it Friday, but there may have been more who would have been unavailable if graduation had been postponed, and the seniors didn't want to take that chance, Lang said.

The other reason for not postponing was the uncertainty of when a traditional ceremony could happen.

"I think large gatherings are going to continue to be in question for a fairly decent period of time," Lang said.

The New School’s tuition rate for the 2020-21 school year will range from $16,160 for kindergartners to $19,200 for high school students. Preschool rates range from $10,100 to $15,400 depending on whether students attend two, three or five days per week. This school year, 15% of The New School’s students received some form of tuition assistance, according to school officials.