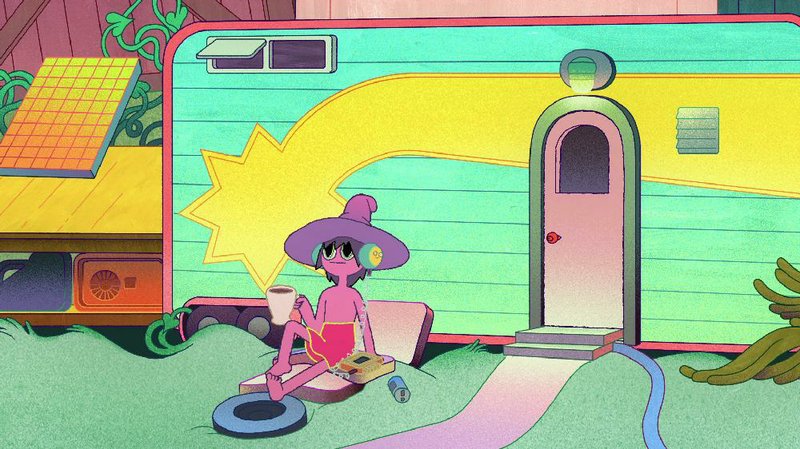 Pendleton Ward, the creator of the Cartoon Network series Adventure Time With Finn and Jake, and comedian Duncan Trussell are at the wheel of The Midnight Gospel, a Netflix cartoon series that animates Trussell’s podcast, “Duncan Trussel Family Hour.”

Pendleton Ward, who created Adventure Time With Finn and Jake, has a new cartoon, The Midnight Gospel, made in collaboration with the comedian Duncan Trussell, and it is an ambitious, extraordinary, dreadful, beautiful thing.

As a work that concerns spiritual equanimity in the face of mortality and apocalypse, the series, now streaming on Netflix, is also unexpectedly apt for these strange days. Simply put — though there is nothing simple about it — it animates interviews from Trussell’s “Duncan Trussell Family Hour,” a podcast with a focus on Eastern religions, mysticism and “magick,” in a wildly fantastical context. There are new scripted bits as well, to fit the cartoon realities, and perhaps some of the interviews are fresh. It’s hard to tell exactly how it was done, and it doesn’t much matter.

Within The Midnight Gospel, Trussell becomes Clancy, a “simulation farmer” who lives on a ribbon of what I guess you could call land undulating through space, as if the surface of the Earth had been peeled like a piece of fruit and unwound into the cosmos. Through the offices of his deteriorating computer (Phil Hendrie), Clancy virtually travels to different worlds where he conducts interviews for his little-heard “space-cast.” (The choice of planets is tightening as one by one they die out “due to operator error.”) He has an unseen sister whose calls he avoids and a mop-haired little dog named Charlotte; the fur on Charlotte’s stomach parts to reveal a portal to a void into which the dog sometimes sucks things. There are thin narrative strands to tie the eight episodes together, some repeating motifs — cats pilot ships and spaceships — and a sort of thematic arc to the series. But it is not long on plot.

What’s happening in conversation is not always strictly connected to the action. A zombie apocalypse accompanies a discussion with Dr. Drew Pinsky — as the president of whatever world we’re in — on the uses and abuses of drugs, and teacher Trudy Goodman discusses mindfulness meditation animated as a knight on a mission of vengeance in a demonic medieval world. Author Jason Louv expounds upon the development of Buddhism in northeastern India and how “the addiction to maya is not to feel your inherent suffering,” while an escape from a prison for “wayward simulated beings” turns into a riot and, not incidentally, a demonstration of karma.

Visually, The Midnight Gospel is reminiscent of Ward’s previous series (Clancy, like Finn, has no nose), yet it has its own style, beginning where Adventure Time gets surrealist and psychedelic and heading on from there. There are textured, painterly backgrounds; the sky subtly changes color. I detect notes of Max and Dave Fleischer’s “Koko the Clown,” comic artist Jim Woodring, “Yellow Submarine” and Hieronymus Bosch. The show is populated with monsters and creatures of the kind young comic artists doodle in the margins of their schoolbooks: a winged horse that spits out ice cream, giant deer dogs, a goldfish in a bowl atop a mechanical body, a pyramid-headed water-slide attendant with a single-eyed sunglass. Clancy assumes a different avatar for each virtual visit — a musical rainbow, an octopus sheriff, a version of himself made of cream. There is a lot of activity in the foreground, background and middle ground of the frame, and the series is worth watching twice just to take in the details.

At least twice. Because they can run on separate tracks, it can be difficult to process the words when you’re concentrating on the pictures, or take in the pictures when you’re paying attention to the words. Indeed, each can stand on its own — try listening with your eyes closed, or watching with the sound down. And yet they do make a sort of counterpoint, one coloring the other, much as the casual rhythms of improvised speech jostle here against the precisely timed work of animation.

The Midnight Gospel is not for children, probably, unless they are enlightened beings with clear memories of past lives (whose parents are OK with a bad word here and there). Like Adventure Time, but more explicitly, it takes an interest in matters of birth, death, rebirth, transfiguration. Death especially, though this provides for some of the series’ most peaceful sequences. The guest in the penultimate episode, animated as the Grim Reaper, is “death positive” mortician and author Caitlin Doughty, weighing in against our fear of corpses; the season’s final interview subject is Trussell’s own late mother, Deneen Fendig (in a conversation recorded in 2013), a bright light dying, though clearly not dying out, from cancer. Their conversation is so deep and sweet and personal that the animation, which includes pastel teddy bear sketch artists in lab coats, can’t really equal it, but my own tears testify to its effectiveness.

“Humans appear and they disappear,” says Fendig. “We are part of the whole and everything in the whole transforms all the time.”

“That’s because I’m your mama.”