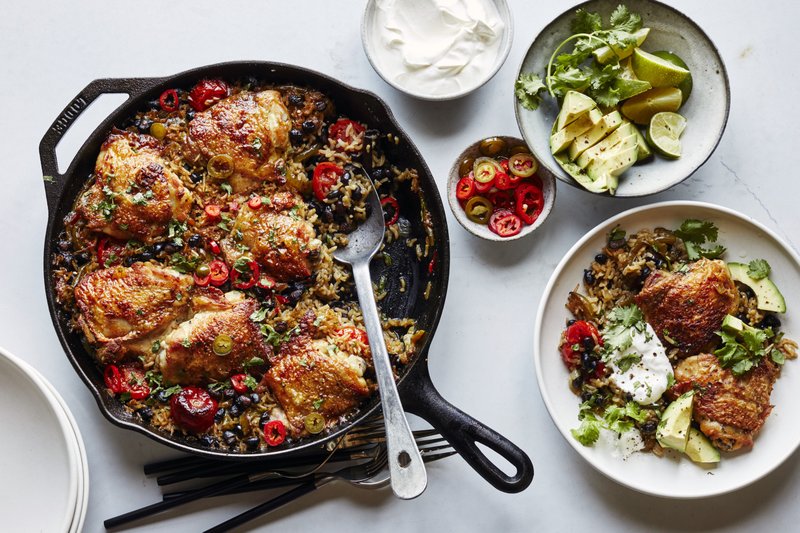 Welcome to Five Weeknight Dishes. This was the week I killed the sourdough starter. We were close during the first month of social distancing, but with humans to feed, provisioning enough flour and time to keep the relationship alive was getting harder. It was giving me reproachful vibes from the counter every time I passed through the kitchen. I also felt reproached by some scallions in the kitchen of chef David Chang, who was cooking on Instagram. He is saving the root ends of his scallions, cutting off only the green parts and regrowing new ones in water glasses.

But anything that makes us feel like we should be doing a better job in the kitchen is not helpful right now. So far, we don't have to be chefs and bakers and gardeners and learn every homesteading skill in the book. For normal people in strange times, just getting dinner on the table is a small victory.

Here are five recipes to help you do that this week.

One of our favorite cookbook authors, Diana Henry, stripped this one-pot recipe down to the particular flavors that make black beans shine: cumin, garlic, cilantro, peppers and tomatoes. Chicken thighs and white rice, of course, make it a satisfying dinner.

1 (3-inch) cinnamon stick, broken in half

1 cup basmati rice, rinsed in a sieve until the water runs clear

Season the chicken with salt and pepper on both sides.

Heat the oil in a 12-inch oven-safe skillet (the pan size is very important) over medium-high. Brown the chicken on both sides to give it good color, 3 to 5 minutes per side. Transfer to a plate. Add the onion and bell peppers to the pan and saute until just starting to soften about 5 minutes. Season with salt and pepper.

In a small saucepan, bring the chicken stock to a boil. Meanwhile, add the Fresno chiles or jalapenos, cinnamon, garlic and cumin to the skillet and cook for about 2 minutes, then add the black beans and cherry tomatoes. Season generously with salt and pepper. Sprinkle the rice on top in an even layer. (It's important that the black beans are beneath the rice and chicken. The rice will burn otherwise.) Add the stock and return the chicken to the pan, skin-side up.

Bake, uncovered, for 40 minutes. The chicken should be lovely and golden, the stock should be absorbed and the rice should be tender. Sprinkle with the cilantro. Serve with lime wedges, pickled chiles, sliced fresh chiles, sour cream and avocado (squeeze some lime juice over the avocados in a bowl and sprinkle with salt and pepper).

Shrimp can take all the garlic, butter and parsley you have to throw at them. Even frozen ones taste great in this recipe.

¾ teaspoon kosher salt, or to taste

Freshly squeezed juice of half a lemon

In a large skillet, melt butter with olive oil. Add garlic and saute until fragrant, about 1 minute. Add wine or broth, salt, red pepper flakes and plenty of black pepper and bring to a simmer. Let wine reduce by half, about 2 minutes.

Add shrimp and saute until they just turn pink, 2 to 4 minutes depending upon their size. Stir in the parsley and lemon juice and serve over pasta or accompanied by crusty bread.

Samin Nosrat's recipe for tender, starchy grains robed in silky cheese is new enough to be interesting but also familiar enough to be comforting. Make sure to cook the grains all the way through so they have only a soft bite to them. She uses pecorino Romano, which is funkier and sharper than parmesan, but parmesan is lovely here too.

Bring a large pot of water to a boil. Season generously with salt. Add farro, and cook until al dente, about 15 to 18 minutes. Set a colander in the sink.

When the farro is cooked, reserve 1 ½ cups cooking water; transfer farro to colander to drain, then return to pot. Add ¾ cup pecorino paste and ½ cup reserved cooking water, and stir vigorously with a wooden spoon until cheese melts and coats farro with a glossy sheen. Taste, and add cooking water and more pecorino paste to taste until farro is the consistency of a loose risotto. If farro is properly seasoned but too thick, add warm tap water instead of salted cooking water to loosen.

Serve immediately, garnished with more pepper. Cover and refrigerate any remaining pecorino paste for up to 1 week. Use on pasta, farro or rice, or spread on toast.

The Times' resident food scientist, J. Kenji López-Alt, reverse-engineered this vegan stew to give it all the depth of flavor and umami of a slow-cooked meat chili. If dried chiles aren't readily available, substitute ground pasilla or ancho powder. If you can't find or don't use plant-based "meat," simply leave it out: The texture it adds is pleasant but not really needed.

For the chile paste (see note):

1 to 2 dried hot chiles, such as árbol or pequín, stems and seeds removed and torn into rough pieces (optional)

1 pound vegan ground "meat," such as Impossible or Beyond

1 medium onion, grated on large holes of a box grater (about 1 ½ cups)

1 (15-ounce) can whole tomatoes packed in juice, drained and chopped into ½-inch pieces

Make the chile paste: Add all the dried chiles to a Dutch oven or large, heavy-bottomed saucepan and cook over medium-high heat, stirring frequently, until slightly darkened and giving off an intense roasted aroma, 2 to 5 minutes. Turn down the heat if they begin to smoke. Add 1 cup water; it should immediately boil. Reduce heat so water barely simmers, and cook until chiles have softened, about 4 minutes. Transfer the chiles and liquid to a blender and blend at high speed, scraping down sides as necessary, until a completely smooth puree is formed, about 2 minutes. Set aside.

Prepare the chili: Melt the butter in a large Dutch oven over medium-high heat. Add the vegan ground "meat" and cook, breaking it up with a wooden spoon, until fat has mostly rendered and it is starting to sizzle rather than steam, about 10 minutes. (I don't mind leaving the rendered fat in the chili. It homogenizes as the chili reduces, so the end result should not be greasy. However, you can drain the mixture at this point if you prefer less fat in the finished chili.)

Add chopped canned tomatoes and scrape up any brown bits that have stuck to the pan. Add kidney beans, soy sauce and 1 cup water, and stir to combine. Bring to a boil, reduce to a simmer, and cook, stirring occasionally, until flavors have developed and chili is thickened to desired consistency, about 30 minutes. Stir in vinegar and liquor, if using. Adjust texture by adding water, and season to taste with salt and pepper. Serve with whatever garnishes you like.

Note: You can omit the chile paste, and substitute 3 tablespoons chile powder instead. Add chile powder with chipotles and cumin in Step 3, and cook, stirring frequently, until aromatic, about 30 seconds, then add the tomato paste and continue with Step 4.

This superfast recipe is built for when all you want is to get dinner together in the time it takes to boil water, then head straight to the couch.

Put the spaghetti in a large pot of well-salted rapidly boiling water and cook only until firmly al dente. (Depending on the brand of pasta, this will be 8 to 10 minutes, but check frequently to see.)

While the pasta is cooking, warm the olive oil in a small skillet over medium heat. Add the garlic and cook for about 1 minute, without letting it brown. Stir in the anchovies, capers and red pepper and cook for a half-minute more, then turn off the heat.

Drain the pasta and return it to the pot. Pour in the garlic mixture, add the parsley, if using, and toss well to coat. Serve with grated Parmesan if desired.