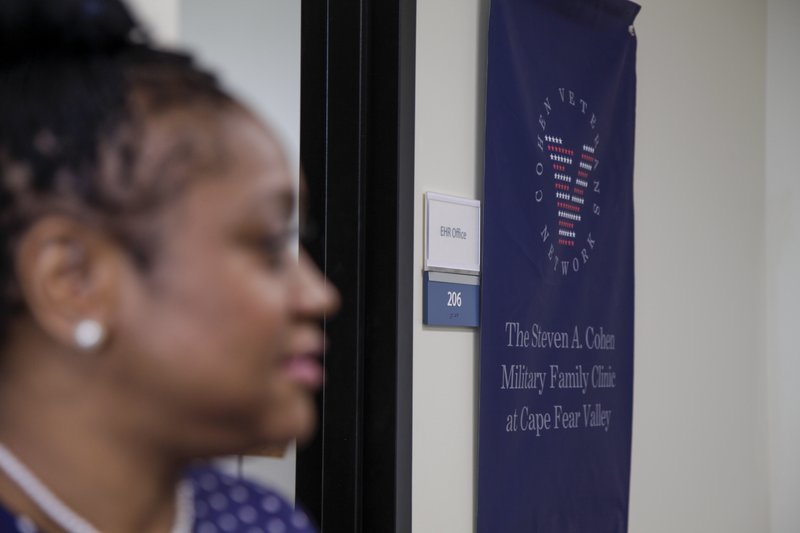 This April 22, 2020, photo shows a sign that says &quot;The Steven A. Cohen Military Family Clinic at Cape Fear Valley&quot; in Fayetteville, N.C. Anthony Hassan, the president and chief executive officer of Cohen, said he doesn't believe the country&#x2019;s mental health system is prepared for the surge likely to happen from the pandemic. Cohen is opening 10 new centers by the end of next year and hiring more staff. (AP Photo/Sarah Blake Morgan)

FAYETTEVILLE, N.C. -- The U.S. Department of Veterans Affairs and its partner mental-health providers have kept thousands of veterans in treatment during the coronavirus pandemic through telehealth appointments.

But as job losses and increased social isolation take an extended toll, some veterans' advocates worry the already understaffed VA medical facilities can't keep up and that telehealth isn't enough.

The VA on Friday kicked off a "Now is the Time" campaign aimed at alerting veterans and their families to the mental-health resources that are available to them.

But veterans advocates still are waiting for a report by a White House task force established by President Donald Trump last year that was charged with developing a national road map to boost mental-health care and stem persistently high suicide numbers among veterans, who have been hard hit in the pandemic.

[Video not showing up above? Click here to watch » https://www.youtube.com/watch?v=lLyCUZdZoNA]

Release of the task force report had been scheduled in March but was abruptly shelved because of the outbreak.

"We are not happy about this decision because we understand that there are partnerships and financial resources tied to this plan that we'd like to see implemented immediately," said Chanin Nuntavong, executive director of The American Legion's Washington office.

VA Secretary Robert Wilkie told veterans groups in a call last week that the draft report was being finalized but declined to give a release date.

An administration official, who requested anonymity to reveal internal deliberations, told The Associated Press that officials planned to unveil the plan around Memorial Day. Karen Pence, wife of the vice president, will help launch the effort.

VA officials said telehealth medical appointments jumped from 20,000 in February to nearly 154,000 in April. Many of the department's partners have moved most or all of their mental-health appointments to telehealth, including the Cohen Veterans Network which shifted 98% of patients at its 15 clinics.

Sherman Gillums Jr., the chief advocacy officer for AMVETS, said telemedicine is likely saving lives, but it is also likely missing some older or less tech savvy veterans. He wants the VA to move veterans with canceled appointments to the front of the line when things reopen and make more inpatient beds immediately available.

Gillums said a suicide prevention tool created by AMVETS to train family members to spot signs of suicidal thoughts before a veteran gets to a crisis could help families during stay-at-home orders.

For years, the government reported that 20 veterans die by suicide each day, about 1.5 times higher than nonveterans. Last fall, the VA adjusted the methodology to remove from the count some active-duty service members and former members of the National Guard and Reserve, updating the veteran suicide rate to 17 a day based on 2017 data, the most recent available. There were 6,139 suicide deaths in 2017, which is up 129 from the previous year, even as the total veteran population declined.

The government says about two-thirds of those were not under VA care, pointing to a need for improved outreach.

Anthony Hassan, the president and chief executive officer of Cohen, said he doesn't believe the country's mental health system is prepared for the surge likely to happen from the pandemic. Cohen is opening 10 new centers by the end of next year and hiring more staff.

"The one thing I don't want to be is too late... We need to be talking now about how we can make sure we are ahead of this," Hassan said.

Information for this article was contributed by Christopher Rugaber of The Associated Press.