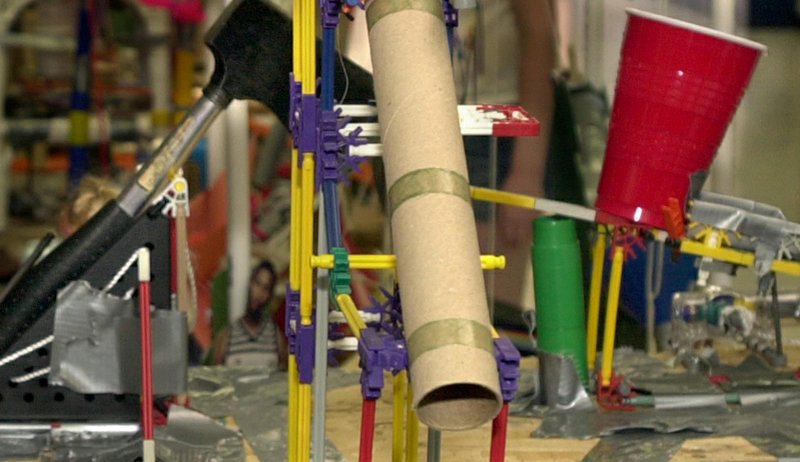 The Museum of Discovery in Little Rock is challenging Arkansans to create their own chain reaction machines, also known as Rube Goldberg Machines. (Democrat-Gazette file photo)

Little Rock’s Museum of Discovery and two corporate partners are teaming up to offer Arkansas inventors of all ages the chance to create a chain reaction machine. The winner will receive a museum membership package and a chain reaction kit to keep the fun going at home.

The Museum of Discovery, along with Southwest Power Pool and Garver, wants to challenge people who are mostly stuck at home due to the covid-19 pandemic to “use engineering principles to complete simple tasks by co-hosting a chain reaction contest,” a news release says. Southwest is sponsoring the museum membership prize pack; Garver is providing the chain reaction kit.

There are two categories for the contest, family-engineered or adult engineered. A team of Southwest, Garver and Museum of Discovery employees will judge the submissions based on these criteria: level of difficulty; creativity; challenging items used; complexity of elements; run time (maximum points will be added to reactions lasting 10 seconds or longer, but they should last no longer than 1 minute); completion of a simple task. Bonus points will be given to chain reactions that turn on a light or are filmed in one take (no editing). “A nudge of encouragement” is allowed if a reaction stalls, the news release says.

Contestants must submit a video of the chain reaction machine by 5 p.m. May 26 to [email protected] Information and tips for building chain reactions can be found at museumofdiscovery.org. Watch the museum’s video announcement here:

Are there any Rube Gold-bergs in Arkansas? Goldberg (1883-1970) was “a cartoonist, an inventor and the only person ever to be listed in Merriam-Webster’s Dictionary as an adjective,” according to rubegoldberg.com.

Goldberg is credited with popularizing chain reactions, also known as Rube Goldberg Machines, in cartoons. His name is entwined forever in the complicated inventions that go through a series of motions to achieve a simple task, and according to dictionary.com , if you are a Rube Goldberg person, you have “a fantastically complicated, improvised appearance”; or you might have “a Rube Goldberg arrangement of flasks and test tubes.” The inventor died in 1970, long before the internet was invented, yet his name lives on through a website, ongoing chain reaction contests and educational materials.

Toronto-based singing group and fundraisers Choir! Choir! Choir! want to hear the whole world sing, and they have put out an open call to singers and wannabe singers to help with their latest project.

First, meet the group. Made up of Nobu Adilman and Daveed Goldman, the group puts on shows in clubs, outdoors or wherever there’s an audience. Their shows go like this: Audience members get a lyric sheet for a well-known song when entering. The creative directors, Adilman and Goldman, then teach the audience an original arrangement of the song, they perfect it and then a video is made.

The group has a sizable fan base on its YouTube channel, youtube.com/user/CHOIRx3, and you can check out some of their past shows there, including a 2016 show in Toronto in which the group and the audience sang Leonard Cohen’s “Hallelujah” and singer Rufus Wainwright joined to sing lead.

Choir! Choir! Choir! has called on Wainwright again, this time to join singers from all over the world performing The Beatles’ “Across the Universe,” featured on their final album in 1970, Let It Be.

Here’s how it works. On the group’s website, choirchoirchoir.com, are two guide tracks — Part A is for lower register singers; Part B for higher — along with instructions for recording singers’ parts. Submissions are due by May 15 and can be uploaded on the same website.

“‘Across the Universe’ has always been a special song to me. When Yoko asked me to perform it at Radio City Music Hall with her son, Sean, and Moby in 2011 raising funds for New Yorkers in the aftermath of 9/11, it sort of put me on the map,” Wainwright said. “It is eerie how the chorus ‘Nothing’s gonna change my world’ has taken a completely different meaning today. Because everything has changed for everyone in the world at the moment. I cannot imagine anything that has affected the entire world like this before, so that is why we want to create a version of this song where the entire world can participate.”