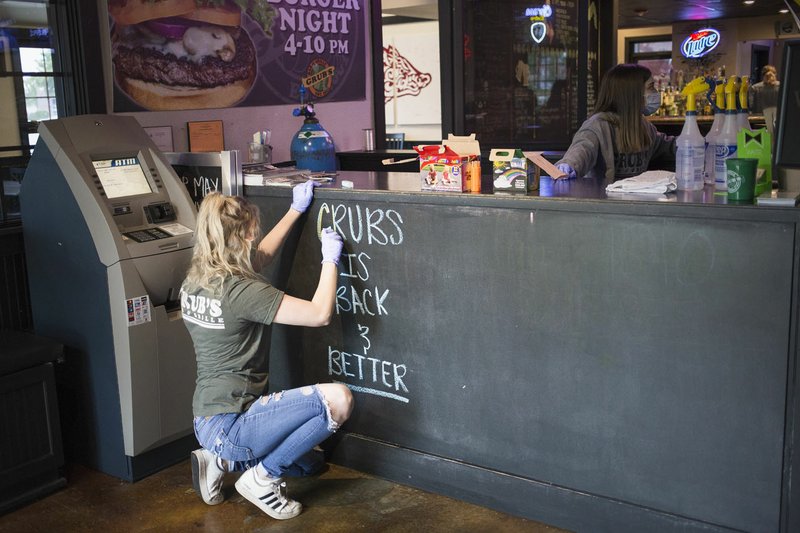 Server Madison Reynold writes a welcome message Monday at Grub's Bar and Grill in Rogers. Restaurants opened their doors with increased safety precautions Monday. They have spaced seating 10 feet apart and are operating at half of the building's capacity, said Jason Collins, the restaurant's co-owner. They require customers entering, going to the bathroom or exiting the building wear a mask. Go to nwaonline.com/200512Daily/ for today's photo gallery. (NWA Democrat-Gazette/Charlie Kaijo)

Scott and Tonya Anderson live with few delivery options to their house outside Rogers. Drive-through or curbside food usually gets cold by the time they get home.

Driving around the city about noon Monday, Scott Anderson told his wife she needed to try the Chicken Philly Cheese at Grub's Bar & Grille.

The two entered with handmade masks -- Tonya can sew -- and did something they haven't been allowed to do in weeks: sit down for a meal in a restaurant. The couple described the excursion as a mini-vacation.

Scott Anderson said he felt comfortable with what he saw from staff at the restaurant.

"I think everybody is doing what they need to do to ensure people are safe," he said. "It is nice to be able sit down and eat again."

Gov. Asa Hutchinson lifted restrictions on dining in beginning Monday. For nearly two months, restaurants in the state have been limited to drive-through, delivery or carryout service only as a way to curtail the spread of covid-19.

The move is part of a phased rollout to get businesses operating again. Restaurants still have restrictions, such as limiting occupancy inside and on patios to one-third capacity as set by the fire marshal, and spacing tables at least 10 feet apart. Customers and staff have to wear masks, although customers can take off their masks to eat.

Jason Collins, a co-owner of Grub's, said he's taking the requirements from the governor's office seriously. Excess chairs were stacked on top of tables in the back. Immovable tables had an X marked in tape. The hostess kept a small bucket with a rag nearby to wipe surfaces. Everyone working wore masks and gloves. Staff said they cleaned nearly every inch of the place.

About noon, the Andersons were the only ones inside dining. Another pair had just left. Two men who walked in without masks were turned away at the door, per the state's orders.

Collins said he wasn't sure what to expect the first day of opening. He suspects as time goes on, more people will become comfortable with going out.

"You've just got to stay fluid," he said. "There are going to be ups and downs. You just deal with one issue at a time."

The four major cities of Northwest Arkansas have more than 1,200 restaurants, according to various sources. Fayetteville reports just more than 620 active business licenses for restaurants in the city. Springdale city officials estimate 150-180 restaurants. The websites for tourism bureaus in Rogers and Bentonville list nearly 450 food and drink establishments collectively.

At the normally busy downtown Fayetteville restaurant A Taste of Thai, a young couple had the place to themselves at noon Monday.

Brittany Dover said she and her husband, Michael Dover, are from Little Rock, but they were in Fayetteville house hunting.

"The weather wasn't really great enough to have a picnic or get anything for take out, so I just called around, and they were open," she said. "I thought, 'Well, if we're the only people there, then we're probably safe.'"

Pam Trongdee, who works at the restaurant, said she didn't know what to expect, but she was hoping for 10 diners at lunch.

On Fayetteville's College Avenue a few miles to the north, Z's Brick Oven Pizza was open for dine-in service. A couple came into the restaurant during the lunch hour, and the staff gave them masks to wear while ordering.

Not every restaurant resumed dine-in service Monday, or if they did, not in the same way.

Jason Piazza, the owner of Hugo's in downtown Fayetteville, said he's not ready to open for dine-in customers just yet. The restaurant has been providing curbside service during the pandemic.

"We're going to wait for two weeks before we make a decision -- watch other restaurants and see what they're doing," he said Monday. "We had a lot of calls today asking if our dining room is open. Hopefully the demand will be there when we open up. We just want to make sure we can do everything safely."

Foghorn's restaurant has five locations in Benton and Washington counties and opened the patios at each restaurant only.

The weather didn't cooperate, owner Jeff Hodges said after he had just left the Fayetteville restaurant on Green Acres Road. High temperature was in the low 50s, with dark clouds and spattering rain throughout most of the day.

Hodges said better weather later in the week should help business. The restaurant is using all disposable utensils, so customers basically can take a to-go order out onto the patio. Hodges said he'll wait and see before resuming table service inside.

"I believe people have a lot less concern outside than being in four walls," he said. "That's my thinking on it. People just want to be out."

The long-term effect of the pandemic weighs heavily on Hodges' mind. Foghorn's qualified for the Paycheck Protection Program under the federal Coronavirus Aid, Relief and Economic Security Act, which covers payroll costs for up to eight weeks. Hodges said he's four weeks into the program.

Bill Bowden of the Arkansas Democrat-Gazette contributed to this report. Stacy Ryburn may be reached by email at [email protected] 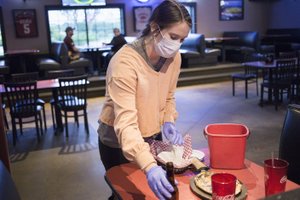 Hostess Arrington Floyd clears a table Monday at Grub's Bar &amp; Grill in Rogers. Restaurants opened their doors with increased safety precautions Monday. They have spaced seating 10 feet apart and are operating at half of the building's capacity, said Jason Collins, the restaurant's co-owner. They require customers entering, going to the bathroom or exiting the building wear a mask. Collins encouraged customers to call ahead for a reservation. Go to nwaonline.com/200512Daily/ for today's photo gallery. (NWA Democrat-Gazette/Charlie Kaijo) 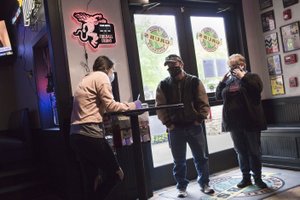 Hostess Arrington Floyd (left) checks in Scott Anderson and Tonya Anderson of Rogers on Monday at Grub's Bar &amp; Grille in Rogers. Restaurants opened their doors with increased safety precautions Monday. They have spaced seating 10 feet apart and are operating at half of the building's capacity said Jason Collins, the restaurant's co-owner. Go to nwaonline.com/200512Daily/ for today's photo gallery. (NWA Democrat-Gazette/Charlie Kaijo) 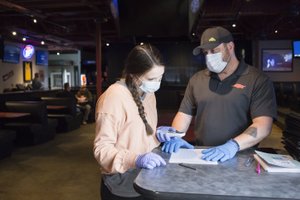 Jason Collins (right), co-owne, talks to hostess Arrington Floyd during a lunch hour Monday at Grub's Bar &amp; Grill in Rogers. Restaurants opened their doors with increased safety precautions Monday. They have spaced seating 10 feet apart and are operating at half of the building's capacity, said Collins. They require customers entering, going to the bathroom or exiting the building wear a mask. He said they are excited to open their doors again for sit-in dining and encourage customers to call ahead for a reservation. Go to nwaonline.com/200512Daily/ for today's photo gallery. (NWA Democrat-Gazette/Charlie Kaijo) 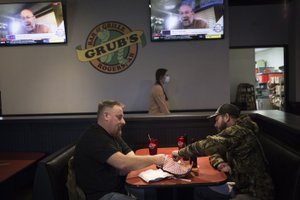 Gov. Asa Hutchinson outlined a number of restrictions for restaurants to follow when resuming dine-in service, including:

• Limiting seating to 33% of capacity, including indoor and outdoor dining areas.

• Maintaining a 10-foot distance between tables.

• Face masks for all staff who come in contact with patrons, encouraged for staff in the back.

• Gloves for all staff to be changed out between each customer, customer group or task.

• Face coverings for all customers until food and drink is served.

• Health screenings for all staff.