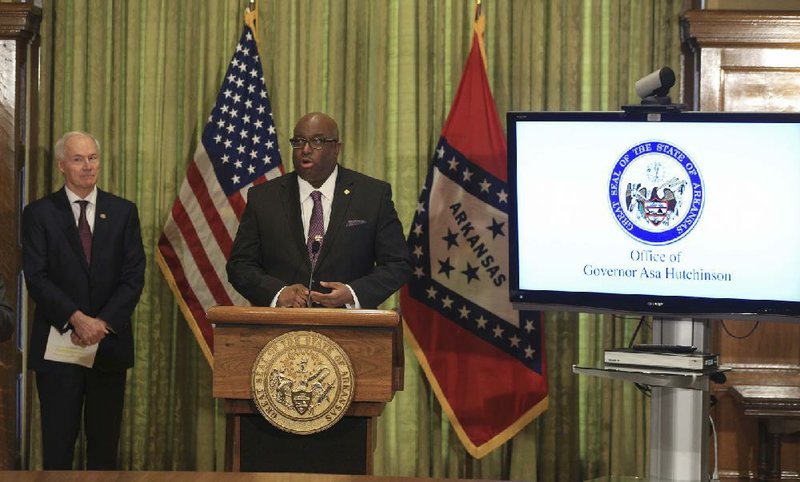 More than 300 inmates at the Arkansas Department of Corrections have been granted early releases in the past week as a precaution against the spread of covid-19, prison officials said Thursday.

The releases are the first to come under an April 20 directive by Gov. Asa Hutchinson to begin a review of inmates incarcerated for nonviolent and nonsexual crimes for early release, according to Solomon Graves, a spokesman for the prison system.

Four days after the governor issued that directive, the Arkansas Board of Corrections voted to make 1,244 inmates immediately eligible for parole consideration. The Parole Board has since been going through the list, and anyone it approves for parole must first develop an approved parole plan and finish any outstanding program requirements in prison before he can be released, officials said.

During court testimony Thursday in an ongoing federal lawsuit filed against the prison system by several state inmates, Division of Correction Director Dexter Payne said the first 300 releases had already occurred and more are likely in the near future.

"We are continuously screening inmates and waiting on the Parole Board," Payne said.

Despite the releases, most of the state's prisons for adult males remain beyond capacity -- including the Cummins Unit, which has the largest covid-19 outbreak in the state -- according to a daily count of the prison system's population.

The 11 inmates suing the state prison system -- prompting Payne's testimony Thursday -- allege that state prison officials have mishandled the threat posed by the coronavirus and put inmates at increased risk of infection. They have asked U.S. District Judge Kristine Baker to issue a preliminary injunction ordering the release of older and medically frail inmates who are at risk of falling seriously ill from the virus.

Baker did not issue a ruling Thursday on the inmate's request for a preliminary injunction.

Eldon Vail, the former director of Washington state's prison system, testified on behalf of the Arkansas inmates at Thursday's hearing, criticizing what he said was a delayed response to the virus by Payne and other prison officials.

When told by state attorneys of the plans for prison releases and other measures being implemented to allow for more space between inmates, Vail said "if they had taken action earlier it is likely they wouldn't have seen so many people become infected."

The first inmate at the Cummins Unit tested positive for the virus on April 12. Within two days, all but three people in that inmate's barracks also tested positive.

As of Thursday, 881 inmates at the Cummins Unit had tested positive for the virus, along with 54 staff members, according to the Health Department. Six inmates have died.

The number of infected staff members combined with a large number of existing vacancies has forced the Department of Corrections to adopt a policy with guidance from the Health Department that allows some staff members who test positive for the virus to return to work, prison officials confirmed this week.

When asked about the policy Thursday, Payne said that fewer than 10 employees who have tested positive for the virus are currently working at the Cummins Unit. Those employees are not showing symptoms of the virus, he said, and are working in barracks only where inmates have already tested positive.

"They go directly to their post, they do not attend staff meetings," Payne said.

Attorneys for the NAACP, the American Civil Liberties Union and Disability Rights Arkansas who represent the inmates have asked Baker to order an end to that policy.

Earlier this week, Baker denied the prisoners' request for an emergency injunction that would have forced prison officials to provide state inmates with better access to sanitation supplies and more space between their beds.

Payne said the department has already begun moving beds farther apart in some prisons where inmates are housed in open barracks.