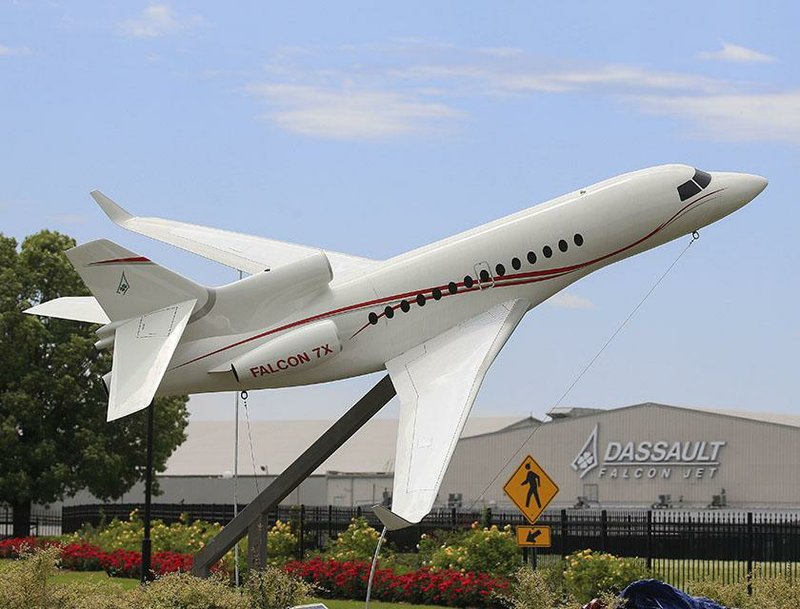 The Dassault Falcon completion center in Little Rock, shown April 3, has about 1,500 workers. Officials said Tuesday that while things at the plant have slowed, “they haven’t stopped.” (Arkansas Democrat-Gazette/Staton Breidenthal) - Photo by Staton Breidenthal

The French aircraft manufacturer, in confirming the action in a statement Tuesday, is the latest company with deep Arkansas ties to cope with the economic fallout from the coronavirus pandemic.

The completion center reportedly has a workforce of close to 1,500 people, making Dassault the airport's largest tenant and one of the largest employers in the Greater Little Rock area.

The six models, which range from the Falcon 2000S to the Falcon 8X, are manufactured in Europe before they are flown to the Little Rock facility with only a green undercoat of zinc phosphate primer adorning the exterior fuselage.

Orders for Falcons fell about 5% in 2019, down to 40 from 42 orders the previous year, according to Defense and Security Monitor, an online trade publication. A total of 40 Falcons were delivered in 2019, compared with 41 in 2018.

In 2020, Dassault Falcon's parent company, Dassault Aviation Group, said it planned to deliver 40 Falcons, but Defense and Security Monitor said the total could be reduced because of the impact from virus-related containment efforts.

The furloughs at the Little Rock facility came little more than a month after the parent company withdrew its 2020 guidance and canceled its 2019 dividend.

"In this current environment, it is difficult to predict how this crisis, due to the uncertainties surrounding the epidemic's scale, geographic scope, duration, social and economic consequences, will impact Dassault Aviation Group 2020 objectives," the company said in an April 1 statement.

Dassault Aviation's other lines include the Rafale fighter jet, military drones and space systems. It has a global workforce of 12,750.

Dassault put an untold number of employees in France on furlough in that nation amid the pandemic, according to an industry trade publication.

"Things have slowed down in Little Rock due to the pandemic," said Andrew Ponzoni, the spokesman for Dassault Falcon. "But they haven't stopped. We are still receiving airplanes for completion, just at a slower rate than we were expecting."

In the statement, Dassault Falcon said affected employees are being "guided through the state unemployment process through individual meetings and Dassault Falcon Jet will maintain employee benefits for them during the furlough."

It also said the furloughs don't include the Dassault Falcon's Little Rock Service Center, which is available to customers who have taken ownership of their aircraft.

Other aerospace manufacturers are trimming their workforces.

Gulfstream, a company that also makes high-end business and military jets, laid off 699 employees in Savannah, Ga., because of a decline in revenue, the company said Monday in a statement reported by news outlets.

Heidi Fedak, the company's director of corporate communications, said the cost-cutting measures that Gulfstream put in place were not "sufficient" to overcome the effects of the virus outbreak on its operations. Some employees who were laid off may receive severance pay and get their benefits extended, she said.

The Savannah Morning News reported last week that the company experienced a delay in the delivery of 11 jets and saw a $549 million decline in revenue during the first quarter of this year.

The company, which employs nearly 18,000 people worldwide and about 10,000 in Georgia, also laid off 446 domestic workers across 10 U.S. cities in October, according to the newspaper.

Global business aviation activity was down by 70% in April compared with the same month in 2019, according to the Global Market Tracker that's maintained by WingX, a technology startup that tracks the global aviation industry.

Dassault Falcon's Little Rock facility helps make the company an important component in Arkansas aerospace exports, which at $1.8 billion annually is the state's leading export, according to the Arkansas Aerospace & Defense Alliance.

The pandemic has rippled through the alliance's 52 members in different ways, including interrupted global supply chains, canceled orders and a drop in maintenance because of fewer planes flying, according to the alliance's executive director, Chad Causey.

"Uncertainty is the word that I hear most in the aerospace industry," he said Tuesday. "What the industry is trying to wrap its head around now is how long will this last and what does normal look like whenever we get back to whatever that normal is."

Activity may have bottomed out for the industry.

WingX said last week that business aircraft flight activity during the week exceeded that seen in the previous week by 19%. The number of flights made in Asia doubled over the same period, while there was 13% growth in Europe and North America. The moving seven-day average rates of activity have increased every day since April 15.

In the industry, "there's an overlying thread of optimism," Causey said. "We've been through worse, and we're probably going to go through worse at some point in the future, and we're going to get through this. That's just kind of who we are as Americans and who this industry is. They're going to adjust and come back even stronger."

The Dassault Falcon furloughs come on the heels of last week's announcement by another company with a significant presence in Central Arkansas.

Union Pacific Railroad on Friday said an undisclosed number of its workers have been furloughed at its heavy locomotive maintenance facility in North Little Rock because of an unprecedented drop in demand from its customers.