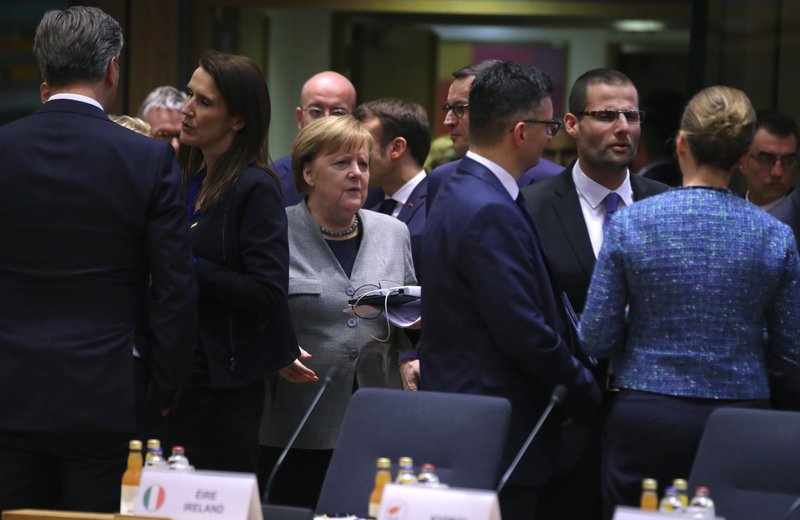 FILE - In this Feb. 21, 2020 file photo, German Chancellor Angela Merkel, center, arrives for a round table meeting at an EU summit in Brussels. European Union leaders are convening by video conference Thursday, March 26, 2020, for their third summit in three weeks, as they battle to contain the spread of the coronavirus. The new coronavirus causes mild or moderate symptoms for most people, but for some, especially older adults and people with existing health problems, it can cause more severe illness or death. (AP Photo/Olivier Matthys, File)

BERLIN -- In her first address to the nation on the coronavirus pandemic, German Chancellor Angela Merkel calmly appealed to citizens' reason and discipline to slow the spread of the virus, acknowledging as a woman who grew up in communist East Germany how difficult it is to give up freedoms, yet as a trained scientist emphasizing that the facts don't lie.

After the televised address last week, the 65-year-old popped into her local supermarket to pick up food, wine and toilet paper to take back to her Berlin apartment. For her, it was a regular shopping stop, but photos snapped by someone at the grocery store were shared worldwide as a reassuring sign of calm leadership amid a global crisis.

With the coronavirus outbreak, Merkel is reasserting her traditional strengths and putting her stamp firmly on domestic policy after two years in which her star seemed to be fading, with attention focused on constant bickering in her governing coalition and her own party's troubled efforts to find a successor.

Merkel has run Germany for more than 14 years and has more than a decade's experience of managing crises. She reassured her compatriots in the 2008 financial crisis that their savings were safe, led a hard-nosed but domestically popular response to the eurozone debt crisis, and then took an initially welcoming -- but divisive -- approach to an influx of migrants in 2015.

In the twilight of her chancellorship, she faces her biggest crisis yet -- a fact underlined by her decision to make her first TV address to the nation other than her annual New Year's message.

"This is serious -- take it seriously," she told her compatriots. "Since German unification -- no, since World War II -- there has been no challenge to our country in which our acting together in solidarity matters so much."

With Germany largely shutting down public life, she alluded to her youth in communist East Germany as she spelled out the scale of the challenge and made clear how hard she found the prospect of clamping down on people's movement.

"For someone like me, for whom freedom of travel and movement were a hard-won right, such restrictions can only be justified by absolute necessity," she said. But they were, she said, "indispensable at the moment to save lives."

The drama was evident in Merkel's words, but the manner was familiar: matter-of-fact and calm, reasoning rather than rousing, creating a message that hit home.

It is a style that has served the former physicist well in juggling Germany's often-fractious coalitions and maintaining public support over the years.

"Merkel painted a picture of the greatest challenge since World War II, but she did not speak of war," the influential Sueddeutsche Zeitung newspaper wrote. "She did not rely on martial words or gestures, but on people's reason. ... Nobody knows if that will be enough, but her tone will at least not lead the people to sink into uncertainty and fear."

The chancellor initially had Health Minister Jens Spahn be the public face of the government's response, drawing some criticism, but she has taken center stage over the past two weeks.

She kept that up after going into quarantine a week ago after a doctor who gave her a vaccination tested positive for the coronavirus. Since then she has twice tested negative for the virus herself but continues to work from home.

Last Monday, she led a Cabinet meeting by phone from home and then issued an audio message setting out a huge government relief package to cushion the blow of the crisis to business -- a format that she said was "unusual, but it was important to me."

Her vice chancellor, Olaf Scholz, who is also finance minister and a member of her coalition partner Social Democrats, has also had a chance to shine in the crisis, leading the way with the aid package that will allow Germany to offer businesses more than $1.1 trillion that he described as a "bazooka."

The jury is still out on how the government's approach will work, but after having run a budget surplus for half a decade, Germany is well-prepared to offer the huge aid program. Its health care system has been in good enough shape to be taking in patients from overwhelmed Italy and France, with intensive care beds still available.

Although Germany has registered the third-highest number of coronavirus infections in Europe with 61,164 as of Sunday, it has seen only 490 people die.

Experts have attributed Germany's success partially to widespread and early testing for the virus.