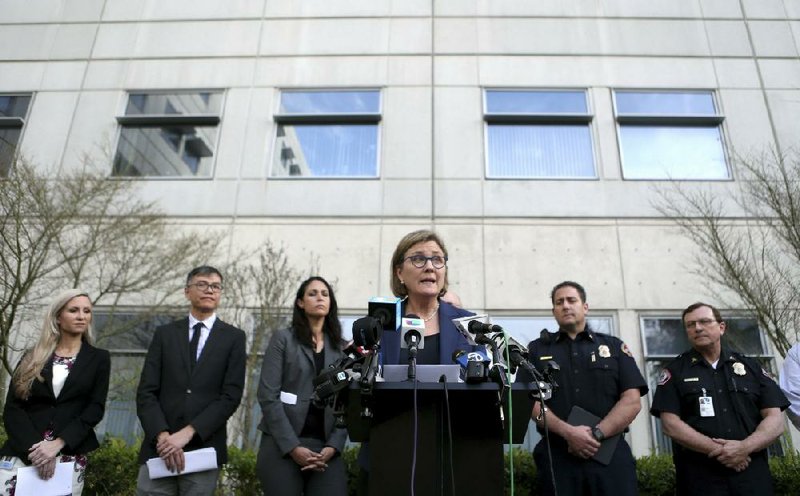 Authorities in Santa Clara County, where more than 2 million people live, were well aware the virus would arrive. They tried to prepare. But without much federal help, they were unable to stop it.

Santa Clara quickly became home to the second covid-19 case in California and the seventh in the United States, on Jan. 31. Two days later, the Centers for Disease Control and Prevention confirmed that a Santa Clara woman had become the nation's ninth case, and like the first, she had recently traveled from Wuhan, the epicenter of China.

But Asian travel alone can't be blamed for the regional outbreak. Silicon Valley is packed with travelers, a byproduct of becoming the world's high-tech capital -- home to Apple, Google, Facebook and other companies. Authorities say the infections probably had multiple origins, and by late February, the virus was spreading through the community.

"Now is the time to prepare for the possibility of widespread community transmission," the county department of public health announced after a third county resident was infected Feb. 28

The San Jose Sharks professional hockey team went ahead with a home game that evening anyway, playing before an announced crowd of more than 14,500.

Covid-19 "clearly is a virus that likes high-density populations," said Dr. Jeffrey Smith, Santa Clara's executive officer, who is also a lawyer. ""That is why social distancing is so very, very, very important."

A few days later, the county turned its recommendation into an order. Large gatherings were banned, making the county a trailblazer for the social distancing requirements later adopted statewide.

As of Monday, the virus had killed 16 people in Santa Clara, more than in any other California county. While Los Angeles now has more cases than Santa Clara, the Silicon Valley, with a smaller population, has a higher infection rate.

Why did Silicon Valley become the California covid-19 breeding ground? It may take years for analysts to provide full answers. But Smith, Santa Clara's executive officer, said the virus exploded in part because the county, in real time, was unable to track and trace its early spread.

"Because we don't have surveillance testing on a local level, we are in some sense flying blind," he said.

And why was the county unable to conduct such surveillance? Smith says the Trump administration had effectively put pandemic planning on hold, and his county and others were not getting the testing and training they wanted.

"In a very real way, it shows how our federal government has turned us into a Third World country," said Smith, 66. Despite being at high risk of infection, he has continued reporting to the county's emergency operations center, seven days a week.

The coronavirus broke out in Wuhan, China, in December, and it probably jumped across the Pacific Ocean to the Silicon Valley that same month, Smith said.

At the time, the region was booming. According to the 2020 Silicon Valley Index, published in February, the various tech hubs in Santa Clara, San Mateo, Alameda and Santa Cruz counties accounted for 12% of the state's GDP, supporting 1.7 million jobs.

But as the report noted, the boom seemed "tenuous." The region was vulnerable to skyrocketing housing prices and income inequality. At the time, few observers would forecast that the trickle of covid-19 cases could turn into a torrent.

Moody's Analytics has since ranked 403 U.S. metropolitan sites most likely to expect economic woes because of the pandemic. Santa Clara County was number 15.

Last week in the nation's tech capital, the campuses of Apple, Google and other companies looked nearly empty. At Apple's main headquarters in Cupertino, a few cars could be seen driving into the high-security entrance, with unmasked security guards checking IDs.

Silicon Valley's tech workers may be weeping over their stock portfolios, but they can easily work from home, unlike some in the region.

In San Jose, the Shops of Vietnam Town complex was shut down save for a few soup shops and other businesses. The city is home to the largest concentration of Vietnamese outside of Vietnam, families who, along with others from around the world, help sustain Silicon Valley's service economy.

Joe Simitian, a Santa Clara County supervisor and former state lawmaker, estimated that nearly 70% of county households have at least one foreign-born member.

"It is not all that surprising that if there was to be a first epicenter in California, we would be it," he said.

As of March 23, the county had reported 375 cases -- 30 linked to international travel, 82 to close contacts with infected people and 82 from community transmission. The number of new cases rises each day by double-digit figures. One day saw a jump of 67.

While those numbers appear alarming, outside specialists say the toll would be far worse if Santa Clara and other nearby counties hadn't quickly worked to keep people at safe distances.

"Given our lack of science and all the emotion, I think all the Bay Area counties have handled it well," he said. "The county health officers, in spite of the fact that they are horrifically underfunded, have done a very good job."

Trying to get a better understanding of the disease's spread, Santa Clara and five other Bay Area counties issued orders last week to require private and academic testing laboratories to report not only positive results but also negative and inconclusive findings.

Santa Clara led the region in issuing a stay-at-home order. It is only a little more than a week old, and county officials do not know yet know how effective it will be. An infected person can take up to 14 days to suffer symptoms.

"Did we put in place enough community mitigation measures?" Williams asked. "Maybe. But the honest truth is we don't know yet."

Williams expects he is likely to personally know someone who dies of the disease before the epidemic ends.

"I worry about my family," he said, "my mother, my grandmother ... Everything we are trying to do is to keep people we collectively love, safe."

Beyond the economy, the stay-at-home order has unraveled the social fabric of the region, he said. Weddings have had to be postponed, funeral services delayed.

With more data, the county could adjust its measures to minimize the disruption, he said.

"We are just desperately trying to avoid being Italy," he said.