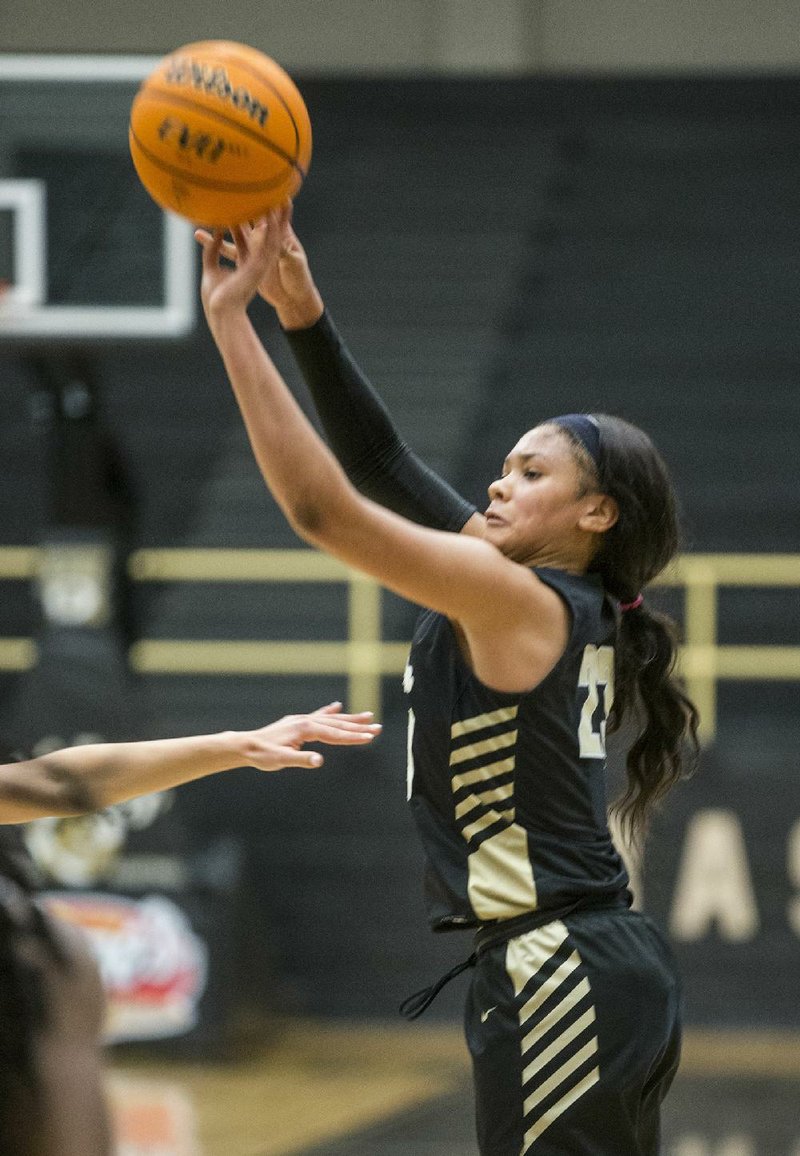 There isn’t much Elauna Eaton can’t do on a basketball court, and opposing teams rarely found a way to stop her during her senior season at Nettleton.

In fact, the only person who came close to slowing down ESPN’s No. 41-ranked player was her coach, and even he couldn’t do it.

“There was a time when she hurt her ankle and it swelled up as big as a grapefruit,” Nettleton Coach Jason Smith said. “We just knew she’d be out the next game, like there’s no way she’d be able to play. But she sends me a text telling me that she was going to practice that day, then play in the game the following day. I told her I needed her to be 100 percent, and she told me she was 110 percent. That’s just the kind of player she is.

“She’s going do whatever it takes to get the job done. She’s a big Kobe Bryant fan, and that Mamba mentality is what she lives by.”

Eaton’s whatever-it-takes mindset gave the Lady Raiders everything they needed to put together one of their most successful seasons ever.

“I approached every game as if it were my last,” said Eaton, the Arkansas Democrat-Gazette All-Arkansas Preps Girls Basketball Player of the Year. “Just go out there and give it my all. That was the mindset of the team in general, just give it our all and play for each other.”

Playing for one another enabled Nettleton to make history as it became the first Lady Raider team to reach the Class 5A state title game.

The 6-1, five-star guard averaged 23.1 points and 7.9 rebounds per game while shooting 41 percent from beyond the three-point line in helping lead Nettleton to a 27-5 record and a share of the 5A-East Conference title. Eaton posted at least 15 points and five rebounds in the same game 18 times and had 10 double-doubles.

Smith had come to expect those types of numbers from Eaton, who’s one of Coach Mike Neighbors’ prized 2020 commitments for the University of Arkansas. The thing that impressed Smith more than anything was her drive to get better, and that’s saying a lot for a player who was already one of the best players in the country.

“The thing is, Elauna knew what was coming night in and night out … she expected it,” Smith said. “One thing she has always done is that she’s always tried to add something to her game. This past summer, whether it was on the EYBL circuit or just working out with her dad or in a small group, she just really worked hard at expanding her game to counter what we expected her to see. 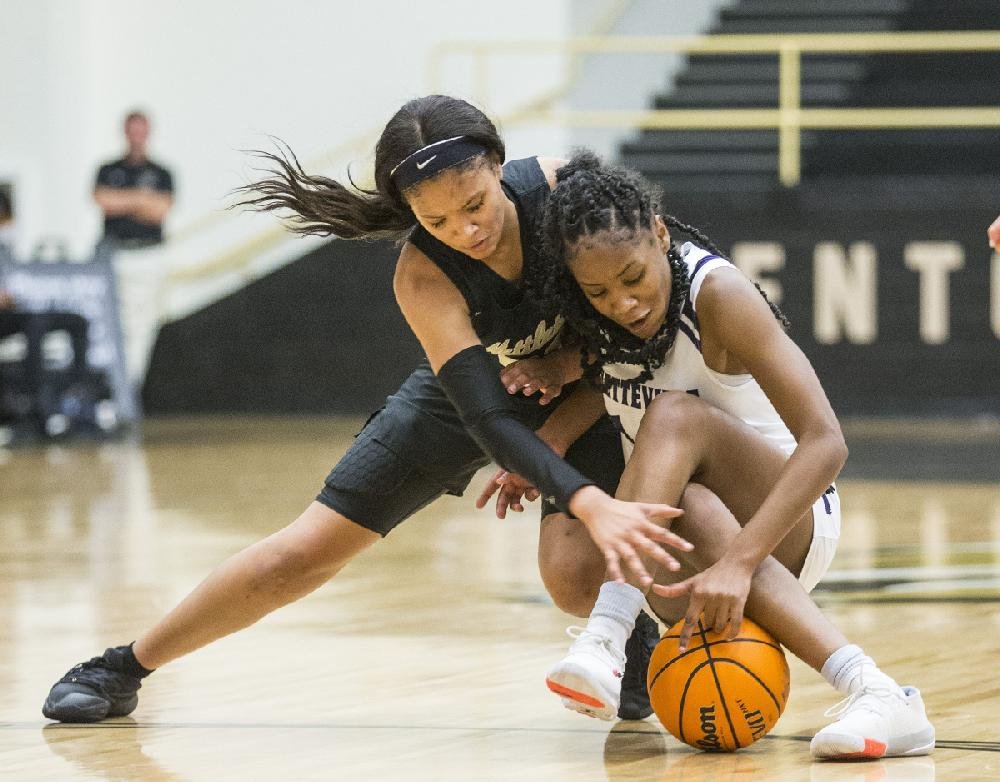 LEFT Nettleton guard Elauna Eaton (left) (pictured here), shown fighting for a loose ball against Fayetteville during the Malik Monk Classic at Bentonville in December, had at least 15 points and 5 rebounds in the same game 18 times this season, and finished with 10 double-doubles. She was named the All-Arkansas Preps Girls Player of the Year. (NWA Democrat-Gazette/Ben Goff) Girls coverage, Page 9C

“Box and one, face-guarding, shading, whatever. She figured out ways to counter those things. That’s just who she is. She’s never going to be satisfied or content with her game.”

Smith noted that Eaton had always been known as an elite shooter, but she began attacking the basket more this year, and as a result, shot 130 more free throws than what she attempted as a junior. As an 86 percent free-throw shooter, those extra eight points made an already strong team even better.

For Eaton, however, defense is what she and her teammates took pride in.

“You have to be able to get stops even if you score,” said Eaton, who averaged nearly two steals per game. “Some nights, shots aren’t going to go down. For me, I was anticipating doing any and everything that was needed.

Smith has witnessed Eaton produce in ways that no one has for the Lady Raiders. She broke the team’s single-game scoring and rebounding records this season, but that pales in comparison to what he saw her do Feb. 14 at West Memphis.

“We’d beaten them at our place earlier in the year, and you could tell they were ready for us,” he explained. “But Elauna came out and within the first 2 1/2 minutes, she hit four three-pointers and a two. She just basically set the tone for the night, and that thing was over before it began.

“I’ve been coaching a long time, and I’ve never seen anything like it. It was just ‘Bam, bam, bam’, sucked the air right out of the gym. That was the moment that I was just like, ‘Wow.’ ”

About the only thing that Smith hasn’t seen Eaton do in her two years at Nettleton is lead the team to a state title. She was set to try and do so on March 14 against Greenwood in the Class 5A final, but the game was postponed because of the coronavirus pandemic.

“That was very disappointing because the Lady Raiders had never won a state title,” Eaton said. “We’d worked really hard, especially during state, and I felt we were playing our best basketball. Finding out we couldn’t end it the way we wanted to was really hurtful.”

There’s still an outside chance the game could be rescheduled, but if not, Eaton said she is thankful for what she was able to achieve on the high school level.

“I went through some challenges, but it was a great run,” she said. “I don’t regret anything I’ve done because everything made me better. I’m just grateful for each and every moment I had.”

Eaton at a glance

NOTEWORTHY Ranked the No. 41 player in the country by ESPN. ... Signed to play at the University of Arkansas. ... Averaged 16 points, 5 rebounds and 2 assists as a junior. ... Her 1,749 points is second all-time in team history behind Jordan Elder’s 1,883. She’s also second in team history in three-pointers made with