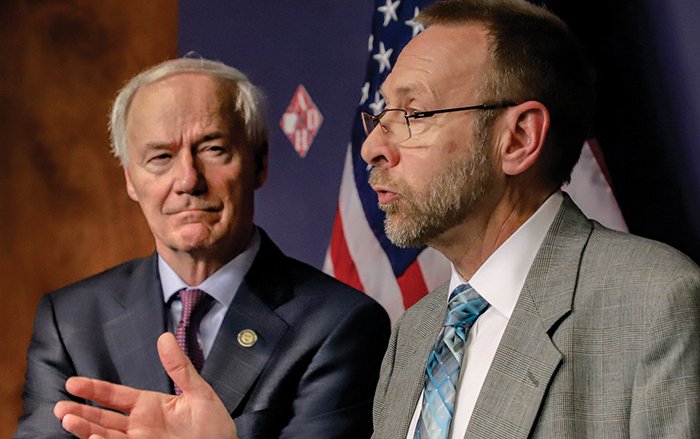 Without exception, the scene has repeated daily for more than two weeks: the governor conducts his covid-19 briefing with the latest news of the unfolding pandemic, before turning to the man in charge of developing the state's response to the virus -- Secretary of Health Nathaniel Smith -- to fill in the details.

"Dr. Smith, I took too much time from your health report," Hutchinson said Wednesday as he ceded the lectern. "I want you to take what you need to make sure everybody understands where we are."

A former state epidemiologist who rose to the top of the state Department of Health in 2013, Smith has suddenly taken a center-stage role in responding to the public health threat posed by the coronavirus.

It is the career culmination for a doctor who has spent decades studying infectious diseases -- particularly HIV and tropical diseases -- and worked under other experts in the field, including Robert Redfield, the current head of the federal Centers for Disease Control and Prevention in Atlanta.

"He's the perfect health officer for the time that we are in right now," Paul Halverson said of Smith. Halverson preceded Smith as head of the Health Department. "He understands detection and outbreak prevention," Halverson said.

In ordinary times, the state health officer oversees the many -- and not entirely congruent -- services of the Health Department. Those include tobacco cessation programs, maintenance of vital health records, distribution of certain welfare benefits and coordination among more than 90 local health offices.

Smith is the longest-serving member of Hutchinson's Cabinet and the only one appointed to his current position by Hutchinson's Democratic predecessor, former Gov. Mike Beebe.

Hutchinson said in a statement that his decision early in his administration to keep Smith has proven fruitful.

[Video not showing up above? Click here to watch » https://www.youtube.com/watch?v=YmpCpbCoRDM]

"He also works the longest hours with the most patience of anyone I know," Hutchinson said. "We can't see the end of the current emergency yet, but I am confident in the strategy we are implementing based upon the public health guidance provided by Secretary Smith and his team."

Smith, 55, began his post-medical school career on the other side of the world as a medical missionary at the Kijabe Hospital in Kenya, during the height of the country's decades-long HIV epidemic.

The Boston-native had spent more than a decade accumulating degrees in Texas: from Rice University and then at the Dallas Theological Seminary, medical school at the Baylor College of Medicine and then a master's program at the University of Texas School of Public Health. After spending less than two years as a staff physician at a clinic in Houston, Smith was again taking classes on tropical medicine in England before departing for Africa.

"When I first came to Kenya I was spending pretty much all of my time in the hospital taking care of very sick people, most of them had conditions that were preventable or if they had been caught early they would have been much less severe. I really just wore out, realizing that what I was doing was helping a lot individuals, but it was kind of a drop in the bucket," Smith recalled in an interview last week.

After spending nearly four years in that country, Smith said, he developed "a desire to move upstream and prevent some things."

Smith made his first move to Arkansas in the early 2000s, working in infectious diseases in private practice and then at the Health Department. By 2006, he was back at the Kijabe Hospital, developing HIV-relief strategies for the University of Maryland School of Medicine, under the school's then-chief of infectious disease research, Redfield.

Smith and his family -- which had grown to include four children adopted in Kenya -- moved back to Arkansas in 2009. He was recruited to take a job as state epidemiologist by Joseph Bates, who was then serving as Halverson's top deputy at the Health Department.

Bates recalled last week making numerous phone calls to Smith in Kenya, often forgetting about the seven-hour time difference and reaching the doctor in the middle of the night in hopes of luring him back to state work.

"That was one of the better things I've done in my life," Bates said of his efforts.

Smith's responsibilities at the Health Department steadily increased, and he was named deputy director for public health programs in 2010, while continuing to serve as state epidemiologist for another two years. Smith also started taking on an adjunct teaching position at the University of Arkansas for Medical Sciences and while there, began making pro-bono clinical visits to patients with HIV or tropical diseases, according to Dr. Michael Saccente, the chief of the hospital's Division of Infectious Diseases, who praised Smith's "selflessness."

When Halverson left the Health Department in 2013 to become the founding dean of a medical school in Indiana, Beebe named Smith as a temporary replacement, then offered him the job three months later.

"I looked for people that were looking to speak truth to power," Beebe said. "You don't want a bunch of sycophants or 'yes' people, that's how you get in trouble."

As Smith's career in the Health Department bureaucracy has transitioned toward well-broadcast news conferences and media appearances, he and Hutchinson have presented a united front. Usually standing directly to his side during Hutchinson's remarks, Smith has stepped in to provide a medical rationale for the governor's decisions to close schools and dine-in restaurants, to limit public gatherings and to avoid more stringent measures taken in other states, such as an order to shutter all nonessential business.

On few occasions over the past two weeks, however, Smith has spoken in contradiction to words spoken by President Donald Trump, even if he does not explicitly mention the Republican leader.

For example, last weekend when asked by reporters about the president's timeline to reopen much of the country by Easter, Smith said "Easter would be early," for a return to normal business in Arkansas. Smith has also cautioned against the use of hydroxychloroquine, after Trump touted on Twitter the anti-malarial drug as a potential "game changer" in combating coronavirus.

After a man in Arizona reportedly died after ingesting a version of the drug used in home aquariums, Smith twice used his time at the governor's daily news briefings to bring up potential dangers from the drug, saying "we have very little evidence to show effectiveness."

When asked if he believed that Trump's medical pronouncements had hampered the messaging put out by himself and the governor, Smith stopped short of outright criticism of the president.

"It would be nice if we were all saying the same thing," Smith said. "I think many have commented on presidential tweets over the last couple of years, so there's no real point in me making any further comments on that."

Since Hutchinson declared a public health emergency on March 11, Smith has not had a day off. In addition to his duties at the Health Department, Smith is the president of the Association of State and Territorial Health Officials, comparing notes and studying results from states at the forefront of the crisis, such as New York and Louisiana.

Redfield said in a statement that Smith's leadership of the association "has helped mobilize our nation's sustained public health response to this global pandemic."

Like so many families, his plans for a vacation were put off because of the spread of the virus, and Smith said he spends his time at home these days with his wife and daughter, punctuated with walks or runs through his neighborhood in Alexander.

"I don't stay up at night, I sleep well most for the time," he said.

In January, Smith's wife, Kim Nguyen Smith, was diagnosed with a recurrence of breast cancer for which she was treated with oral chemotherapy. His in-laws, who are in their 80s, live on the same street he does.

Reflecting on how the pandemic threat has affected his personal life, Smith said, "I think we all have people in our lives who we know are vulnerable."

Hours later, Smith was standing behind the lectern again Wednesday urging Arkansans to keep their social distance, but also to reach out to friends, neighbors and older people to lift the fog of isolation. 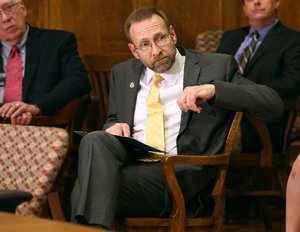 Dr. Nate Smith, a former epidemiologist who rose to the top of the state Department of Health, has spent decades studying infectious diseases. (Arkansas Democrat-Gazette/Thomas Metthe)