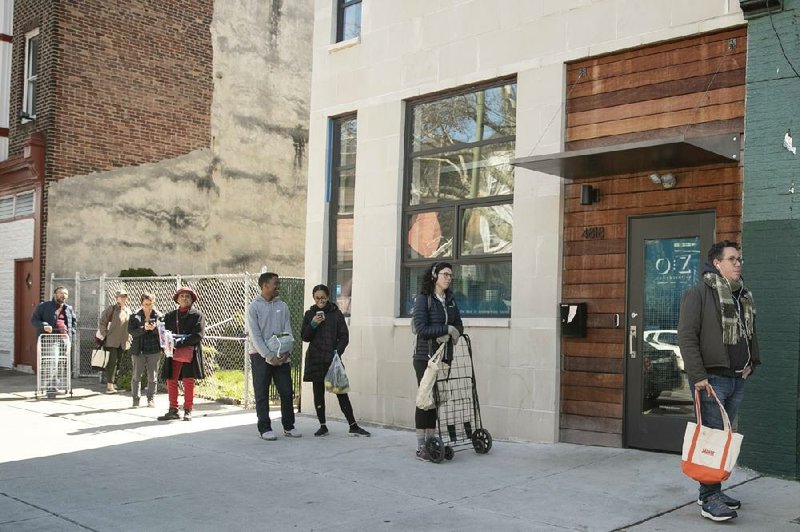 Shoppers line up at a safe distance last week at a Philadelphia supermarket. The Commerce Department reported Friday that consumer spending edged up 0.2% in February. (Heather Khalifa/The Philadelphia Inquirer)

WASHINGTON -- Americans increased their spending by a modest amount in February, but the expectation is that spending will be hit hard in coming months reflecting the shutdown of the economy by the coronavirus.

The Commerce Department reported Friday that spending edged up 0.2% in February, matching the January gain but below the 0.4% increase in December.

Personal incomes rose a solid 0.6 percent in February, matching the January gain. Those strong increases are likely to fall off as millions of Americans lose their jobs, although Congress has passed and President Donald Trump has signed a $2.2 trillion economic relief package that will cushion the blow by providing checks of up to $1,200 to individuals and expanding unemployment benefits.

The hope is that the relief package will keep the economy from falling into a deep recession because of the shutdowns. The Federal Reserve has also moved to slash its key interest rate to a record low near zero and is providing billions of dollars in support to keep credit flowing.

Economists have said all these efforts will not be enough to keep the country out of a downturn, but they could help promote a stronger and quicker rebound once the virus is contained.

A key inflation measure was up 1.8% for the 12 months ending in February, according to the latest data, below the Fed's 2% target. The absence of inflation worries has allowed the central bank to focus on supporting economic growth.

Consumer spending accounts for 70% of economic activity, but surveys are already showing the virus is having a major effect on personal spending. Coresight, a data research firm, found that almost half of U.S. consumers -- 47% -- are now extremely concerned about the outbreak, up 10 percentage points in just one week.

"With high-frequency data showing a collapse in economic activity over the past couple of weeks, overall consumer spending is likely to have plummeted in March," said Andrew Hunter, senior U.S. economist at Capital Economics.

Many economists believe a recession has already begun, although they are forecasting it could be a short one, lasting only two quarters, if the government's efforts to contain the coronavirus are successful.

The head of the International Monetary Fund said Friday it is clear that the global economy has now entered a recession that could be as bad or worse than the 2009 downturn.

Managing Director Kristalina Georgieva said the 189-nation lending agency was forecasting a recovery in 2021, saying it could be a "sizable rebound." But she said this would occur only if nations succeed in containing the coronavirus and limiting the economic damage.

The Trump administration is hoping to get the new programs in the relief package up and running quickly. Treasury Secretary Steven Mnuchin said Friday he wanted to get a program to supply small businesses with bank loans operational in a week and the IRS payments sent to households in three weeks.

Asked in an interview on Fox Business Network about the record 3.3 million applications for unemployment benefits reported Thursday, Mnuchin said, "These numbers matter because people are losing their jobs." But he said the government programs in the rescue bill should either get people back to work or supply support until they can find new jobs.

The spending report said the personal saving rate rose in February to 8.2% of after-tax income, the highest level in 11 months and up from 7.9% in January.

Consumer sentiment, as measured by the University of Michigan's monthly survey, saw its sharpest drop since October 2008 during the recession, according to a report released Thursday.

And even then, analysts said, the current decline significantly understated the coronavirus toll, as two-thirds of the survey interviews were conducted before lock-down and physical distancing orders in mid-March shut down hundreds of thousands of shops, restaurants, offices and other large parts of the American economy.

The index saw an 11.9 percentage-point drop, compared with a 12.7-point drop during the recession. The University of Michigan has tracked monthly changes in consumer sentiment since 1978.

Information for this article was contributed by Martin Crutsinger of The Associated Press and by Don Lee of the Los Angeles Times.