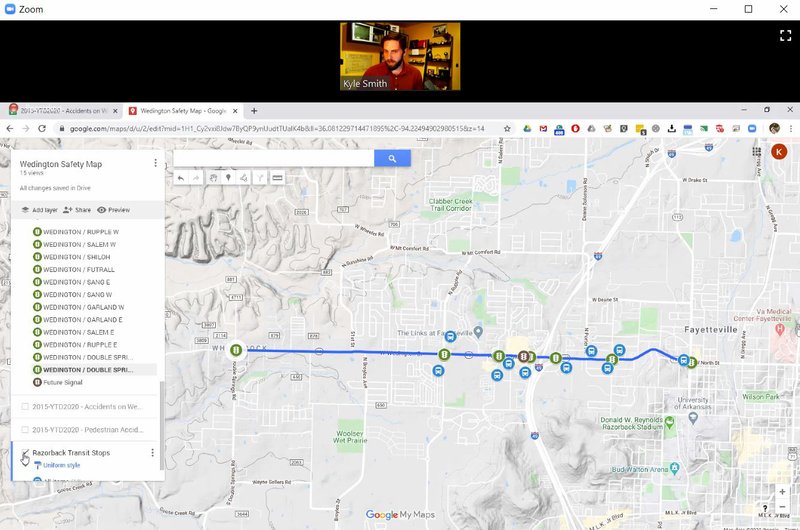 Kyle Smith, Fayetteville council member, gives a presentation on traffic data on Wedington Drive in Fayetteville during a virtual meeting of the City Council's transportation committee on Tuesday. Council members were able to conduct business through the Zoom application. (NWA Democrat-Gazette/Stacy Ryburn)

“I believe there are more instances of the abridgment of the freedom of the people by gradual and silent encroachments of those in power than by violent and sudden usurpations.”

The coronavirus is first and foremost a public health threat that must be faced head on. Of that, there can be no doubt.

The virus relentlessly attacks at every opportunity, leaving many of those who come into contact with it struggling to overcome fever, coughs and difficulty breathing. Its effects, however, are much further reaching.

The coronavirus represents a threat to transparency in government, to the access of information that stands as a bulwark against abuse of power.

We do not argue against the reasonable steps government authorities have been forced to take to make at least the very basics of governing possible in the midst of a public health crisis. It would be scientifically and medically ludicrous for city councils, quorum courts, the Arkansas General Assembly or other public bodies to gather large crowds in confined spaces for a heartfelt debate over the funding of a program or the approval of a subdivision or the permitting a quarry.

But let’s all remain mindful that it’s in the midst of crisis that erosion of liberties can appear attractive, all in the name of responding to the emergency. Government already legally keeps all sorts of secrets from “we the people.” It’s often in a crisis that a push for more secrecy and less accountability becomes a push.

“The people never give up their liberties but under some delusion,” Edmund Burke suggested. And when people are captivated by fear of the future, of the unknown, it can provide significant cover for anyone who finds open government an obstruction rather than an American value.

Thomas Jefferson said “The natural progress of things is for liberty to yield and government to gain ground.” Someone wise also once suggested the price of such liberty, if Americans are to keep it, is eternal vigilance.

And so it is that we don’t care one much for “remote” government meetings, even though in the middle of this health crisis they may perfect sense as a temporary workaround to avoid exposure to the coronavirus. In terms of open government meetings, however, nothing works better than government officials conducting business in full view of an audience of local residents ready to observe and, when necessary, participate.

Yes, we’re thankful for modern advancements that make it possible for limited governing to happen with decision-makers gathered electronically. But the electronic hoops involved in public participation represent a barrier to open government. We realize it’s a “best-we-can-do” situation at the moment, but let’s resist any notion that remote government is a wave of the future. It would no doubt prove convenient for some, but convenience is way down the list of concerns when it comes to the public easily being able to keep watch over government authorities.

The Columbia Journalism Review recently reported the U.S. Department of State has suspended Freedom of Information operations entirely until further notice. Journalist Emma Best, an expert at digging out documented details from the FBI, says she’s concerned agencies are using the virus as “an obstructive step.”

Also in CJR, Kelley Shannon, executive director of the Freedom of Information Foundation of Texas, said “We do have concerns about what will happen if it goes on too long or we start seeing abuse of the situation. Governments are going to have to operate even amid this covid-19 concern. I certainly hope they come up with systems to abide by not only the letter of the law, but the spirit of the law. That is, the public has the right to information about how its government is operating. It’s of utmost importance at all times, but particularly now in a time of crisis.”

Government’s pace frustrates people even in the regular course of business, but as our communities face the challenges of this pandemic, we recommend our government leaders slow down the usual processes to allow residents ample opportunity within this constrained environment to participate in their government. Naturally, a few emergency changes might need to be sped along, but the normal course of governing should recognize the obstacles to participatory government existing in the middle of the covid-19 response. For example, let’s not speed through a change to zoning regulations or business regulations on short notice just because it can be done.

Public participation and access to public information needs to be protected and, once we advance to the post-coronavirus world — whenever that might be — let’s get back to the regular order of business that has served Arkansans so well for decades.