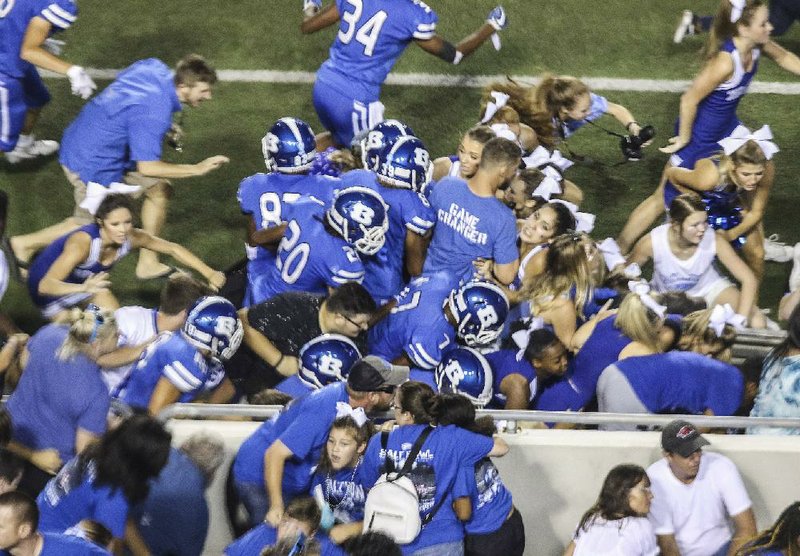 Bryant High School football players, cheerleaders, fans and officials scramble for cover after hearing what was thought to be gun shots from the stands during the Salt Bowl game against Benton at War Memorial Stadium in Little Rock on Aug. 25, 2018. An investigation later determined that a stun gun was activated during a fight in the stands. (Democrat-Gazette file photo)

The Salt Bowl, featuring Saline County high schools Benton and Bryant, was supposed to be a fun evening featuring one of the top football rivalries in the state.

A state high school record crowd of 38,215 at War Memorial Stadium in Little Rock had just seen senior quarterback Ren Hefley throw a 57-yard touchdown pass to give the Bryant Hornets a 28-14 lead over Benton with 11:33 left in the third quarter.

Then, chaos broke out in the bleachers.

At 8:58 p.m., an incident took place in the north end of War Memorial Stadium, causing fans to run in different directions and onto the field.

"It was a stampede," said Bill Hefley, who had 17 family members and friends in his party Saturday. "I was trying to get everybody out."

The Little Rock Police Department said Saturday night that the incident is under investigation and the department as well as War Memorial Stadium officials will review footage of what exactly took place. The department also said there were no gunshots.

Earlier, the LRPD tweeted that a fight broke out in the stadium. There were minor injuries in the scramble, but it was not immediately clear how many people were hurt.

"It's a shame that some jack wagons do something like that to give high school sports a bad name. This ought to be a celebration of what's going on. But that kind of stuff happens. It's a travesty to the kids and to the people that come to support it."

Superintendents Karen Walters of Bryant and Mike Skelton of Benton, as well as athletic directors Mike Lee (Bryant) and Scott Neathery (Benton), met with stadium officials. After about 40 minutes, the game was canceled with 9:22 remaining in the third quarter and Bryant was declared the winner, 28-14.

"It was in the best interest of the fans," James said. "It was the best decision to do. We didn't want anybody to get hurt."

According to the Arkansas Activities Association's handbook, nonconference games that are suspended at any time after the end of the first half are considered complete and the existing score stands.

"I was hoping everybody was going to be safe," said Trusty, who did not know what was going on at first. "Luckily, I don't think anything bad happened. It was very hectic."

Neathery offered no comment on behalf of Benton's athletic department and did not allow Harris to speak to the Arkansas Democrat-Gazette.

James said he thought about the safety of his players on the field and his family in the bleachers.

"We didn't know where it was coming from," James said. "People started dropping kids over our kids. It was panic.

"You never know how something is going to turn out until it does. We're blessed that all of our football players [105] were accounted for and that they're safe. That's the most important thing."

For the first two quarters and three minutes, the 2018 Salt Bowl was an entertaining affair.

Bryant led 21-14 at halftime thanks to two rushing touchdowns by senior running back Latavion Scott of 1 yard and 46 yards, and a 9-yard run by senior wide receiver Andrew Hayes.

James said that with the large crowds the Salt Bowl has attracted in recent years, there may need to be more security at the stadium, which also hosts at least one University of Arkansas football game a year.

"You're talking about almost 40,000 people. It's the level of a Razorback game," James said. "You've got security all over the top and everywhere else. It's almost got to be approached like a Razorback game with all of the measures.

"It's a shame that it's gotten to this in our society that guys want to ruin this for everybody here for the right reasons. We can get on the social end of that as well. But I'm really set back by this. It doesn't surprise me that it happened.

"That's just the way our country is headed right now. We have to get together as parents, as community leaders and our district. We have to get a grip of what is happening in our world. We have to help fix some of it."

Said Trusty: "It went from a really fun evening to a chaotic evening very quickly."