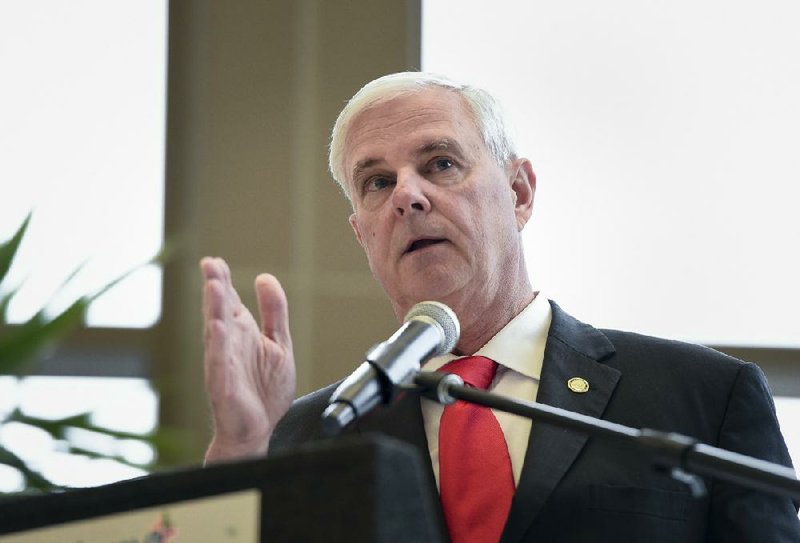 WASHINGTON -- The N95 face mask in U.S. Rep. Steve Womack's shed typically filters out lawn mower dust. But this week, it headed east with the congressman, another tool in his anti-coronavirus arsenal.

Given the lack of traffic, "I didn't use it because I really didn't feel like I needed to," Womack said as he awaited today's vote on a $2.2 trillion relief package.

There were only three other passengers on the first leg of his flight; 10 on the second, the Republican from Rogers said in a telephone interview.

In the air and on the ground, maintaining 6 feet of separation was easy, he said.

"The airports are like ghost towns, and you can sense the economic damage that's being done in our country just by observing the travel industry," he said. "The travel and restaurant and hospitality industry is absolutely getting hammered right now."

It's not just the Northwest Arkansas airport that's suffering. The downturn has hit Little Rock's Bill and Hillary Clinton National Airport. as well.

The four largest domestic air carriers have all cut back on flights into and out of Arkansas' capital city in the wake of the coronavirus crisis.

Instead of 43 daily departures, they are down to 25, airport spokesman Shane Carter said.

Nonstop flights between Little Rock and Ronald Reagan Washington National Airport were canceled Thursday and today, according to the American Airlines app.

"Due to decreased customer demand, we have made several changes to our schedule in this rapidly changing environment. Customers who are impacted by these cancellations will be contacted directly," an American Airlines spokesman said.

U.S. Rep. French Hill said his flight from Little Rock to Dallas-Fort Worth on Thursday afternoon was uncrowded; roughly 15 passengers on board. There were three dozen or so passengers on the second leg of the trip, including two other congressmen, he noted.

"Both airports were very quiet," the Little Rock Republican said in a text message.

A flight cancellation Thursday evening prevented U.S. Rep. Bruce Westerman from flying back to Washington on the eve of the vote, a spokesman for the Hot Springs Republican said. Other flight options were being reviewed.

Womack returned to Washington on Wednesday, so he'd have plenty of cushion if a flight was delayed or canceled.

Since his election to Congress in 2010, he has never been absent when votes are recorded, showing up 6,148 straight times, his office said, citing tallies from the House clerk's office.

"This is part of what people pay me to do, and I take my job very seriously," he said. "If you made a commitment to represent the people, then I think you need to show up."

Given the pandemic, the importance of public health is being stressed on both sides of the Capitol.

During Wednesday's Senate vote, U.S. Sen. John Boozman, a Republican from Rogers, presided over a portion of the session. On C-SPAN 2, the cameras captured him carefully sanitizing his hands and vigorously scrubbing the desktop with disinfectant wipes.

So far, only one of his Senate colleagues, Rand Paul, R-Ky., has been diagnosed with the coronavirus.

The goal is to keep the number low.

"We've really just tried to do good, common-sense things," Boozman said in a telephone interview. "I think people were responsible and, as a result, I don't think we've had a significant outbreak. Hopefully that will continue to be the case."

In a memo Thursday, the House's sergeant-at-arms and attending physician told members that they should use "extreme care and deliberation when making the determination to travel to Washington, D.C."

They also announced measures designed to minimize the risk of coronavirus exposure during today's vote.

During debate, there will be no milling about. Only those scheduled to speak will be welcome inside the chambers. Other members have been urged to stay in their offices until a vote is called.

Instead of using elevators, members are encouraged to use the stairways. They are urged, at all times, to remain at least 6 feet away from one another.

When it's time to vote, the representatives will be summoned alphabetically, 30 at a time.

Womack has a spot in the last group of 30. If all goes as planned, he'll vote in the 15th wave.

"This is going to be a very unique, once-in-a-lifetime vote," he said, calling it a chance "to help people when they need help the most."

"I've got a mask, and I've got my hand sanitizer with me, so I'm in pretty good shape," he said.

Information for this article was contributed by Noel Oman of the Arkansas Democrat-Gazette.