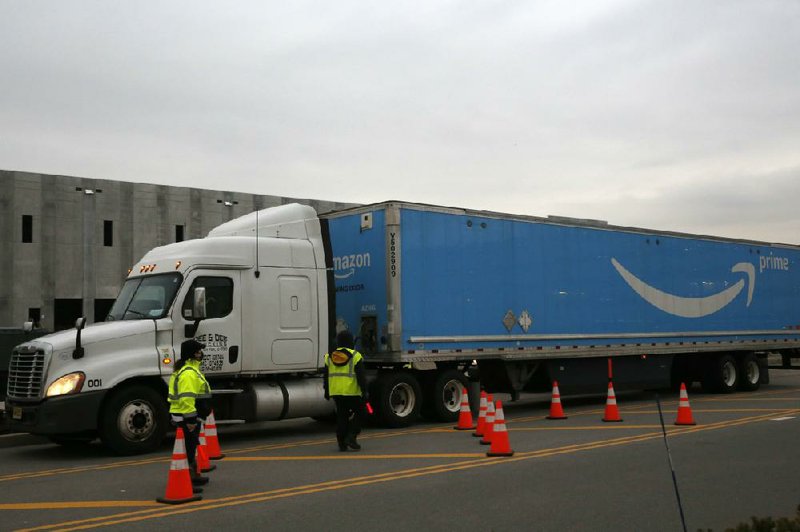 The U.S. coronavirus outbreak has spread to at least 10 Amazon.com Inc. warehouses, infecting workers racing to deliver huge volumes of packages for consumers leery of leaving their homes to shop.

Amazon has told employees at a warehouse in Shepherdsville, Ky., that it will keep their facility shut indefinitely after three employees there tested positive for the disease caused by the coronavirus.

Workers at the facility, south of Louisville, were told Monday evening that the warehouse would be closed for 48 hours for "enhanced, daily deep cleaning" to protect employees.

In the past few days, Amazon workers also tested positive for covid-19, the disease caused by the novel virus, at nine other warehouses -- two in New York City and one each in Jacksonville, Fla.; Katy, Texas; Brownstown, Mich.; Oklahoma City; Moreno Valley, Calif.; Joliet, Ill.; and Wallingford, Conn., according to Amazon and media reports. In some cases, Amazon shut down facilities for cleaning, and some co-workers who were in close contact with their infected colleagues have been quarantined.

Unlike most of Amazon's hundreds of U.S. warehouses, which can process a variety of items, the Shepherdsville facility primarily handles returns of shoes and clothing, employees say. Workers there interviewed by Bloomberg this week said they were afraid to return to work simply to process returns.

Just last week, warehouse workers sounded alarms that the company is not doing enough to protect them from the virus. That came after workers at Amazon warehouses in Spain and Italy tested positive for the virus. Since then, more than 1,500 workers from around the world have signed a petition that calls on the company to take additional steps to ensure safety in the workplace.

Some workers complained that Amazon pushes them to meet the per-hour rate at which it wants orders fulfilled, a practice that they worry discourages safe sanitary practices such as washing hands after a cough or sneeze. Others have complained about "stand-up" meetings, where workers stand shoulder to shoulder at the start of each shift.

The new outbreaks at Amazon's U.S. facilities come days after the online retail giant announced plans to hire 100,000 new workers to help cope with the flood of orders that have clogged its system. That unexpected surge has rendered Amazon unable to stock and ship household staples to many customers who had come to rely on the company's convenience.

"We are supporting the individuals, following guidelines from local officials, and are taking extreme measures to ensure the safety of all the employees at our sites," Amazon spokeswoman Lisa Levandowski said in an emailed statement.

The company has recently adopted new policies for its warehouses including more regularly cleaning door handles, stairway handrails, touch screens and more, Levandowski said. It's halted stand-up meetings, staggered start and break times to aid social distancing and suspended screening workers as they leave to improve the flow of workers, she said.

Amazon, though, is struggling to get workers all the protection it wants them to have. The company placed orders for "millions of face masks" to give to employees and contractors who cannot work from home, Amazon Chief Executive Officer Jeff Bezos wrote in a letter to employees Saturday. Because of the global shortage of those masks, though, very few of those orders have been filled, he wrote.

Amazon has more than 175 warehouses around the globe, including more than 110 in North America.

Sweetening its new job offers, Amazon increased pay for hourly employees through April by $2 an hour in the United States, $2.40 in the United Kingdom, and by about $2.20 in parts of the European Union. The company, which generated $280.5 billion in sales last year, said the pay increases will cost $350 million.

Despite the spread of the coronavirus in Amazon's U.S. warehouses, it probably will find workers for the new posts, said Elaine Kwon, founder of e-commerce management and software firm Kwontified and a former Amazon manager. With unemployment claims already soaring as businesses shutter from the coronavirus fallout, laid-off workers will need income to pay their rents and feed their families.

"Quite a few people will be willing to take the risk," Kwon said.

Information for this article was contributed by Jay Greene of The Washington Post and by Matt Day of Bloomberg News.