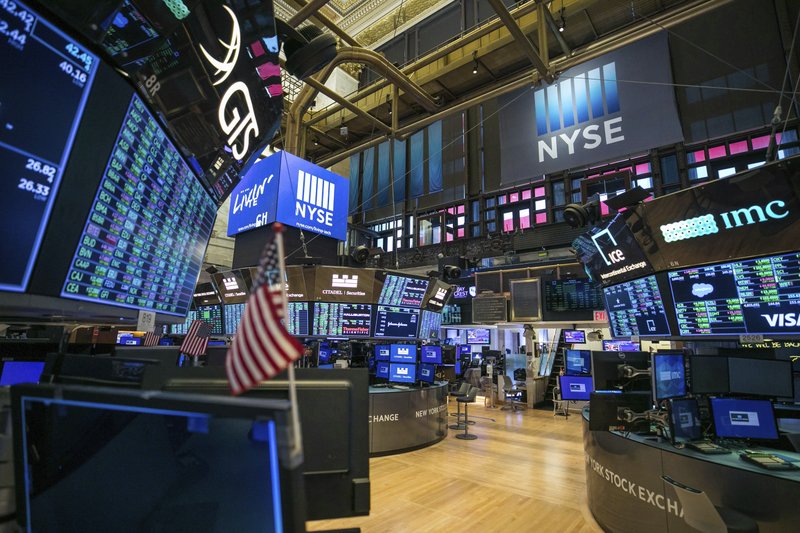 This photo provided by the New York Stock Exchange shows the unoccupied NYSE trading floor, closed temporarily for the first time in 228 years as a result of coronavirus concerns, Tuesday March 24, 2020. Global stocks and U.S. futures declined Thursday after the U.S. Senate approved a proposed $2.2 trillion virus aid package following a delay over its details and sent the measure to the House of Representatives. (Kearney Ferguson/NYSE via AP, File)

NEW YORK — Stocks rose on Wall Street Thursday, putting the market on track for its first three-day rally in six weeks, even as the astonishing scale of the downturn slamming the economy because of the coronavirus becomes more apparent.

Nearly 3.3 million Americans applied for unemployment benefits last week, easily shattering the prior record set in 1982, as layoffs and business shutdowns sweep across the country. The outbreak has happened so suddenly that Thursday’s jobless report is one of the first points of data showing how much economic pain it’s creating.

The S&P 500 was up 3% in early trading, continuing a rally that has vaulted the index 14% higher since Monday on rising expectations that Congress will soon approve an unprecedented rescue package for the economy. Both Capitol Hill and the Federal Reserve are promising an astonishing amount of aid for the economy and markets, hoping to support them as the outbreak causes more businesses to shut down by the day.

Late Wednesday, the Senate unanimously approved the $2.2 trillion plan, which includes direct payments to U.S. households and aid to hard-hit industries. The House of Representatives is expected to approve it Friday.

Futures for stocks and yields cut their losses immediately after the jobless claims report was released in the morning, which was before U.S. stock trading opened. Most traders likely expected an extreme number from the jobless report, according to Kevin Giddis, chief fixed income strategist at Raymond James.

Investors say the market need three main things to slow its breathtaking drop, which has sliced one quarter off the S&P 500 since it set its record last month.

The first is already here after the Federal Reserve has slashed interest rates back to nearly zero and offered to buy an unlimited amount of Treasurys to get lending markets running more smoothly. The second is making progress, as the economic rescue plan moves through Capitol HIll.

The third, though, is getting more concerning by the day: the accelerating spread of the virus.

The United States has more than 69,000 known cases, and the worldwide number of infections has topped 487,000, according to Johns Hopkins University. The death toll has surpassed 22,000, while more than 117,000 have recovered.

For most people, the new coronavirus causes mild or moderate symptoms, such as fever and cough that clear up in two to three weeks. For some, especially older adults and people with existing health problems, it can cause more severe illness, including pneumonia and death

The yield on the 10-year Treasury fell to 0.81% from 0.85% late Wednesday. It had been as low as 0.77% just before the jobless report was released. Lower yields reflect dimmer expectations for economic growth and greater demand for low-risk assets.