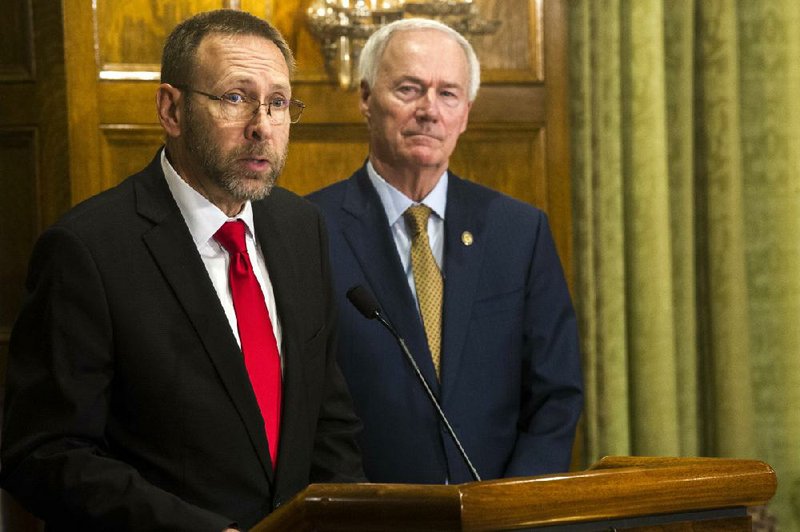 Dr. Nate Smith (left), secretary of the Arkansas Department of Health, with Gov. Asa Hutchinson, said Wednesday that people who had previously shown no symptoms are now seeking testing, driving up the number of covid-19 cases in Arkansas. “That’s what we can expect in the next days and weeks ahead, and that’s why it’s so important that we take these steps to interrupt transmission to protect ourselves, our families and our communities,” he added. (Arkansas Democrat-Gazette/Stephen Swofford) - Photo by Stephen Swofford

Gov. Asa Hutchinson said Wednesday that the state will mandate -- not just recommend -- that indoor social gatherings be limited to 10 or fewer people as the number of Arkansans testing positive for the coronavirus topped 300.

From Tuesday evening to Wednesday evening, the number of virus cases reported by the state increased by 76, to 308, setting yet again a record for largest one-day increase.

The previous record increase was the 47 new cases the state reported Sunday.

He lowered that threshold to 50 people three days later and to 10 on March 19, when he also ordered the closing of bars, restaurant dining rooms and fitness clubs in the state, and extended an earlier order closing public schools in the state to at least April 17.

On Wednesday, Hutchinson said that while many Arkansans have been following his recommendation against gatherings of more than 10 "very carefully, there are some exceptions to that, and those exceptions can endanger what we're trying to do in getting a handle on this crisis."

He said he hopes the mandate, which will come in the form of a directive from the state Department of Health, will avoid the need for more disruptive restrictions that other states have imposed.

[Video not showing up above? Click here to watch » https://www.youtube.com/watch?v=h2gcqHh5s5Y]

On Monday, a weekday curfew also will be in place in the city from 9 a.m. to 2:30 p.m. for young people under age 18. Most of them normally would be in school.

"We cannot do business as usual," the mayor said in a news release. "These are unusual times, and we must do all within our authority to slow the spread of coronavirus."

Meanwhile, The Waters of White Hall became the fourth nursing home in the state where a resident has tested positive.

State Department of Health Secretary Nate Smith said the resident's infection is one of several linked to the state's first known case -- a patient at Jefferson Regional Medical Center in Pine Bluff who had visited New Orleans for Mardi Gras.

A physician who got the virus from that patient is thought to have passed it to a resident at The Villages of General Baptist West in Pine Bluff, where another resident has also tested positive, Smith has said.

At Briarwood Nursing and Rehabilitation Little Rock, Smith said two more residents and two staff members had tested positive, raising the number of residents known to be infected there to 37 and the staff members testing positive to 10.

No additional cases were found at Apple Creek Health and Rehab in Centerton, where one patient has a confirmed diagnosis.

As of Wednesday evening, coronavirus cases had been reported in 39 of the state's 75 counties, including the first one reported in Drew County in southeastern Arkansas.

Pulaski County had 79 cases, an increase of 15 from a day earlier.

Benton County had an increase of at least 14 cases. It was reported as having 18 cases. A day earlier, the number was listed as being between one and four.

In Cleburne County, where dozens of members of a church in Greers Ferry are among those infected, the cases rose from 34 to 40.

Neighboring Faulkner County had 23 cases, an increase of six from a day earlier.

Jefferson County had 22 cases, the same number it was listed as having the previous evening.

All other counties in the state with cases were reported as having between one and four people who have tested positive.

The Health Department reported Arkansas' first two deaths from the coronavirus on Tuesday but did not report any additional deaths Wednesday.

Twelve people were listed as having recovered, meaning that at least a week has passed since they became sick and that they haven't had symptoms for at least three days.

The state's total numbers were updated twice later Wednesday. Typically, the numbers are updated one or two more times after the Health Department coronavirus briefings.

Before Wednesday, the number of new cases reported each day had dropped as the state focused its testing on residents and staff members at nursing homes where residents had tested positive.

Many of those recent tests were of people who did not have symptoms and tested negative.

Smith said Wednesday's jump was partly because of an increase in results from commercial laboratories outside the state.

The University of Arkansas for Medical Sciences began its own testing this week, reporting at least one positive result as of Tuesday.

"I do think we're seeing more transmission of covid-19 in our state, and those who had been infected but had no symptoms are now becoming symptomatic and seeking testing," Smith said.

"That's what we can expect in the next days and weeks ahead, and that's why it's so important that we take these steps to interrupt transmission to protect ourselves, our families and our communities."

Health officials have recommended protective measures such as frequent hand-washing, staying at least 6 feet away from other people and avoiding unnecessary trips to public places.

The business closures have led to a flood of unemployment claims, including 9,400 last week, and 8,700 as of midweek this week.

The state is still working on upgrades to its website to better handle claims filed online, he said.

"I urge those that are filing these claims to be patient, as I know you have been, because this volume of claims is unprecedented in our history," he said.

Hutchinson said he had directed state boards to expedite the licensing of resident physicians and nurses to prepare for an influx of covid-19 patients.

The state Medical Board has issued emergency, temporary licenses to 15 physicians who are beginning their residencies while it completes its review of their qualifications and backgrounds.

An additional 100 physicians have been issued normal licenses this month as the board has worked to speed up its process, Hutchinson said.

The state Board of Nursing has issued similar expedited licenses or permits to 300 nurses since the board approved the procedure Monday.

Meanwhile, Hutchinson said some nurses have been laid off as hospitals and clinics have scaled back on performing elective procedures. He said those nurses can contact the nursing board's director, Sue Tedford, for information on employers who are hiring.

"As you look at how long this might extend, there's going to be fatigue," and some workers who catch the virus will be off work while they isolate themselves at home, Hutchinson said. 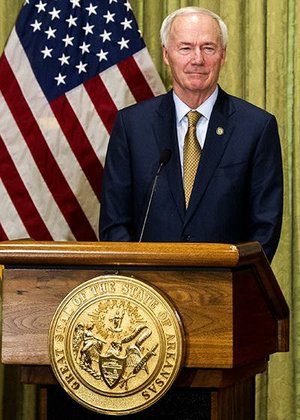 Photo by Stephen Swofford
Gov. Asa Hutchinson said Wednesday that he hopes the groups mandate will avert the need for more disruptive restrictions that other states have imposed. More photos at arkansasonline.com/326governor/. (Arkansas Democrat-Gazette/Stephen Swofford)