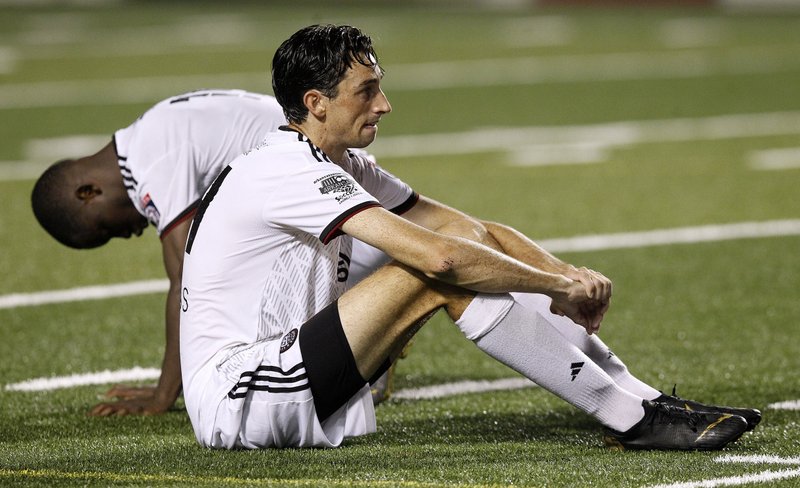 Little Rock Rangers Lance Crabtree (front) and Donald Benamna react to the Ranger's loss to Demize in the Heartland semifinals on Wednesday, July 10, 2019, at War Memorial Stadium in Little Rock. The Rangers are part of the National Premier Soccer League, which announced it is cancelling its 2020 season. (Arkansas Democrat-Gazette file photo)

The National Premier Soccer League, in which two Arkansas teams are a part of, announced Thursday that it has canceled the 2020 season because of the coronavirus pandemic.

The Little Rock Rangers and Ozark FC, based in Springdale, are the league’s two Arkansas teams affected.

While other professional sports leagues, such as the NBA and NHL, have suspended their seasons, the NPSL is the first North American league to cancel its season.

In the league's statement, it said that with the United States Adult Soccer Association (USASA) extending its ban on soccer activity until April 30 and the Centers for Disease Control and Prevention's recommendation of no group activities until May 10, those factors led to the cancelation of the season.

The NPSL is considered to be soccer’s fourth tier league behind Major League Soccer, United Soccer League and the National Independent Soccer League.

The Rangers were to enter their fifth season of play, while Ozark FC was going into its fourth season. Little Rock plays its games at War Memorial Stadium, while Ozark FC has played at Wildcat Stadium at Springdale Har-Ber High School.