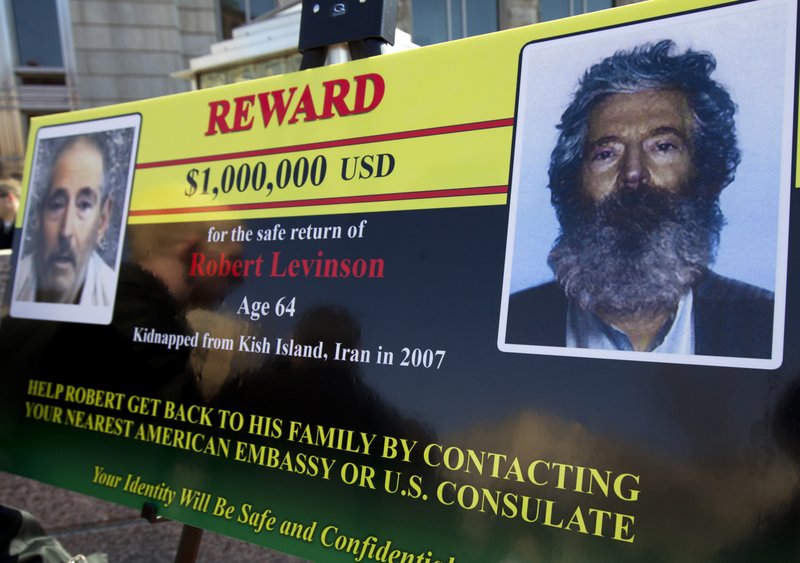 FILE - In this March 6, 2012 file photo, an FBI poster showing a composite image of former FBI agent Robert Levinson, right, of how he would look like now, left, taken from the video, released by his captors in Washington during a news conference. The family of retired FBI agent Levinson said Wednesday, March 25, 2020, that U.S. government officials have concluded that he has died while in the custody of Iran. (AP Photo/Manuel Balce Ceneta, File)

WASHINGTON -- The U.S. government has concluded that retired FBI agent Robert Levinson, who vanished more than a decade ago, died while in the custody of Iran, his family and administration officials said Wednesday.

The circumstances and timing of Levinson's death was unclear, but White House national security adviser Robert O'Brien said Wednesday evening that the U.S. believes Levinson "may have passed away some time ago."

Hours earlier, his family said information that U.S. officials had received had led them to conclude that he was dead, though it did not describe the nature of the information.

The government's acknowledgment of Levinson's death came hours after a White House briefing in which President Donald Trump appeared to equivocate on the news, saying, "I won't accept that he's dead."

U.S. officials communicated the news to Levinson's family in a meeting in Washington in recent weeks, according to a person familiar with the situation who spoke on condition of anonymity to discuss the private encounter. The person said the information about Levinson had come from Iran's foreign minister.

Levinson disappeared on March 9, 2007, when he was scheduled to meet a source on the Iranian island of Kish. For years, U.S. officials would say only that Levinson was working independently on a private investigation.

But a 2013 Associated Press investigation revealed that Levinson had been sent on a mission by CIA analysts who had no authority to run such an operation.

The Trump administration has made it a priority to seek the release of American hostages and prisoners detained overseas.

The family said it does not know when or if Levinson's body will be returned for burial.