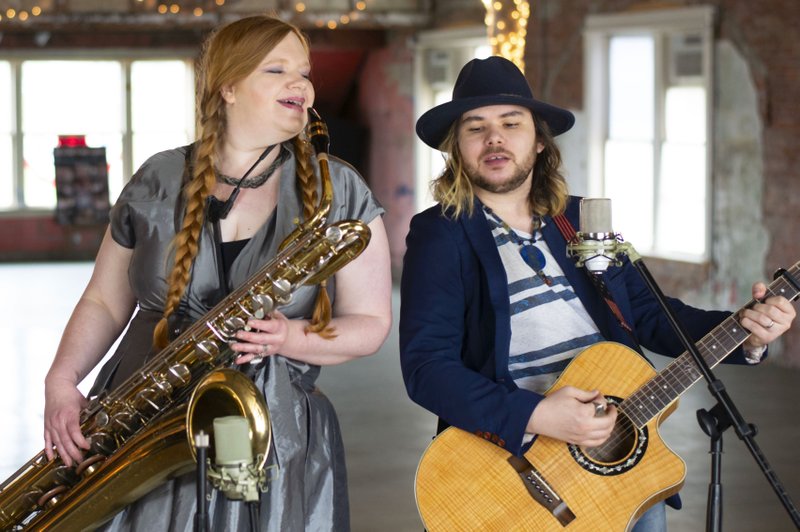 Monsterboy, the North Little Rock husband and wife duo of Chris Long and Veronica Wirges, streamed a live concert from their home Saturday and plan on doing more shows. Keep up at monsterboylives.com. As the country's Music Scene has been reduced to empty venues everywhere, musicians are stepping up with shows on Facebook Live, their own websites and other streaming services. YouTube is a treasure trove of old shows and new ones. (Special to the Democrat-Gazette)

March Madness fell by the wayside as the covid-19 virus arrived in Arkansas, saddening all the basketball junkies. Those of us more attuned to music than roundball soon were equally at a loss.

Fans of live music that we are, my wife, Vicki, and I had been looking forward to March, a month that was packed with so much music that we would have had to decide between so many options that the mind reeled with possibilities. But then the month began unreeling ...

First to fall was the brilliant Oklahoma singer-songwriter John Fullbright, who was to have made another in a series of appearances at South on Main on March 12. At least fans could find solace in a rescheduled Fullbright show, now set for June 11. What had promised to be a great weekend of music soon fell apart.

We had spent considerable time trying to choose between another tour by Cher at Simmons Bank Arena and the acclaimed sister duo, Larkin Poe, at the University of Arkansas — Pulaski Technical College's Center for the Arts and Humanities. We had decided on Cher, figuring there would be lots of costume changes, peculiar sets and maybe even explosions. Both were to have been March 14; both went away, as did Cher's entire tour, which could re-appear in the future, as might the Larkin Poe concert, of course.

Another talented Oklahoma singer-songwriter named John Moreland would have played South on Main on March 15, but he was quickly bumped to July 9. Later in the week, smooth-voiced sort of bluesy singer-guitarist Chris Smither was to have been the first performer as spring arrived March 20, at the Ron Robinson Theater, but, alas, it was not to be, giving some of us even more blues-like symptoms.

The Greasy Greens, statewide legends who have been around almost as long as Cher, were to have performed a benefit for the local humane society in their old stamping grounds, Eureka Springs, but no such luck. Surprisingly enough, even with a band with such an extended membership, a new date has already been announced: June 19.

Amanda Shires, a talented Texas singer/fiddler, was poised to return to Little Rock for a show at the Rev Room, but the plug got pulled, and a new date will be determined later, says the Rev Room site. The month's third show at South on Main, Mary Gauthier, set for today, also went south, with a rescheduling in the works. Big Smith, based in Springfield, Mo., which broke up in 2012 but got back together four years later, was supposed to play the Rev Room on Saturday; no clues yet on when a new date might appear.

April already has some bummers of its own. James McMurtry was going to do two shows — an early and a late one — in one night, April 3, at White Water Tavern, but Sept. 30 has been announced as a new date but whether he's still doing two shows was not made clear. (McMurtry explains what went into his decision to postpone and adds some of his political views in a story on rollingstone.com.)

Brave Combo, the "nuclear polka" band from Denton, Texas, which has not performed hereabouts in a coon's age, was going to play Stickyz Rock 'n' Roll Chicken Shack on April 10, and Chris Maxwell, once the lead singer and guitarist in Arkansas' most acclaimed 20th-century band, The Gunbunnies, was planning to return for a solo show April 11 at White Water, but for now, the Combo has not rescheduled and Maxwell will hunker down in his Woodstock, N.Y., home.

Maxwell, on his website, maxwellsongs.com, shows off his new album, New Store No. 2, supplies the lyrics and allows fans to listen. True, it's hardly as good as seeing him rear back, guitar gripped intently, and belt out the songs in person, but these are troubled times and we must take what crumbs are there.

Of course, many treasures can be found on YouTube, such as Little Rock band Mulehead's 2015 video for "Head Around," a tribute to the band's favorite new-wave videos from the late 1970s and early '80s. The lyrics are even provided.

Malcolm Holcombe, a North Carolina singer-songwriter-guitarist and a kind gentleman and frequent performer at White Water, is a sort of Woody Guthrie style musician with numerous videos that attest to his talents.

Monsterboy, a North Little Rock husband and wife duo (Chris Long and Veronica Wirges), recently let us know that they are streaming on Facebook, Instagram and Twitch. They can be found at monsterboylives.com. They are streaming live shows everyday at 7:30.

The Oxford American, the magazine which hosts South on Main, also produces a podcast called Points South (oxfordamerican.org/pointssouth/) in which some of the musicians who have performed recently at South on Main can be heard, including Parker Millsap, John Paul White and Dom Flemons.

Those interested in falling into an unusual rabbit hole of reading about music should look at Perfect Sound Forever, a site (furious.com) that has articles, tributes and so forth about folks who delight in being out of the mainstream. There's an interesting examination of a single not-all-that-famous Beatles song, "And Your Bird Can Sing," and looking at a piece on The Mekons, one finds this quote from the late Lester Bangs: "The proximity of other humans often fills me with overwhelming anxiety, but I also feel that this precarious sentence is all we've got and ... it's a person's duty to the potentials of its own soul to make the best of it."

A few other options come to mind. Farm Aid, the worthy organization that combines music with its concern for saving family farms, has assembled playlists on Spotify and YouTube. "Boost your spirits with these songs," the site says. It includes Old Crow Medicine Show's "Wagon Wheel," The Dave Matthews Band's "Ants Marching" and Jason Mraz's "I'm Yours," and more.

Pastemagazine.com offers "Live Music at Home," explaining that they will have a rotating list of 10 selections, starting with Prince, The Allman Brothers Band, The Grateful Dead and others. Diving deeper on the "Paste" site, one finds "10 Musicians Making Great Quarantine Music on Instagram Right Now," which starts with Scott Avett of The Avett Brothers playing his "feral banjo" as he goes on a walk in the woods. Others on the list are Joan Shelley, Jason Isbell, Dawes, Kacey Musgraves (the site adds "the good stuff is in (her) stories"), Lizzo, John Mayer and others.

There are a couple of great singer-songwriters who are as funny as they are musical, sort of like Will Rogers. They are Steve Poltz and Paul Thorn and both have done some online things that are worth seeing and hearing.

Ben Gibbard, lead singer of the band Death Cab for Cutie, is now livestreaming daily performances, Ben Gibbard: Live From Home, at 6 p.m. CDT. He has a new song, "Life in Quarantine," to remind fans of just where we are these days. You can still watch it, and who knows, he may do another one before this pandemic is over. Watch on the Death Cab for Cutie YouTube page.

And although there's nothing new about Talking Heads and their music, now is a good time to re-hear the band's song, "Life During Wartime," with its unforgettable (and you can certainly shout them!) lines: "This ain't no party, this ain't no disco, this ain't no foolin' around."

If you are an Arkansas band that is planning a live-stream or plan on reaching your fans some other way, please let us know by emailing [email protected] If you are a live music venue and are planning something innovative to reach out to audiences, please also reach out.