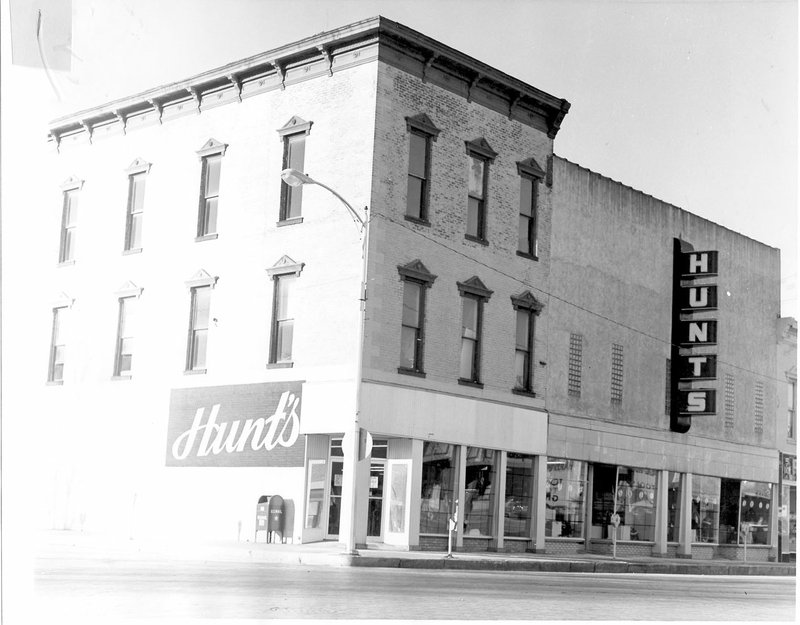 Hunt's Department Store remodeled the building in 1964 and occupied all of the ground floor except for Townzen's Barber Shop, which faced First Street. The upper two floors were vacant and remained vacant until the present. (Courtesy Photo/Bob Balch)

The most interesting and enduring historical site in Rogers may be the building at the southwest corner of Walnut and First streets. This building was built about 1890 by W.A. Miller and was known as the "Opera Block," because the famous Opera House was located above the storefront businesses. Imagine Rogers when this structure was built -- no electricity, running water, indoor bathrooms or telephones. Livestock roamed the dirt streets and board sidewalks. Merchants and customers endured the dust and mud for 34 more years until the downtown was paved with brick in 1924.

The building originally was two stories and consisted of four different stores at street level and businesses upstairs, including the famous Opera House. It started with 102 W. Walnut St. on the corner and then 104, 106 and 108. You could write an entire book about the historical events that happened in this building that shaped the infant city of Rogers. Here are some of the highlights: In the corner -- 102 W. Walnut St. -- H.L. Stroud (owner of Stroud's Mercantile Store) had the Citizen's Bank from 1898 until he sold it in 1909. In 1903, a third floor was added except for 108, which remained two stories. The third floor provided space for a lodge hall above the bank and enlarged the Opera House. The Citizen's Bank folded in 1914 during the depression leading up to World War I. In 1915, J.E. Applegate -- the owner of Applegate's Drug Store -- founded the American National Bank (now Arvest) and it did business here until 1937. Then the corner became the home of Gray's Grocery in the 1940s and Skelton's Food Center in the 1950s. Opel Beck opened her Mode O'Day clothing store in 1959 at 102 W. Walnut St. In 1964, she moved down the block into the Golden Rule building at 110 W. Walnut St. (recently Myra Moran's Trolley Line Book Store).

In 1898, Miller's Dry Goods at 104 was the location of the first telephone switchboard in Rogers. Next door, 106 was a drug store in 1898, and Erwin Funk's Rogers Democrat newspaper was upstairs. In 1908, 106 was McNeil's Drug Store, where pharmacist Tom McNeil sold the first automobiles in Rogers. He went on to start McNeil Chevrolet and was a major auto dealer in Rogers until he sold out in 1954.

In 1947, Hunt's moved into the Opera House building into the location sandwiched between Skelton's Grocery and Russell's Five & Dime (108 W. Walnut St.). Hunt's knocked out the partition between 104 and 106 and made it into a single department store. In 1959, Bob Balch was the manager and later the owner of Hunt's Department Store, until it closed in 1981.

In 2013, I met Bob Balch, who was visiting Rogers from his home in Florida, and he graciously granted an interview. During these years, Hunt's and Stroud's were the only department stores in Rogers. Under Bob's leadership, the merchandise changed to focus on men's, women's and children's medium- to upper-priced clothing. The store thrived, and in 1964, Mode O'Day moved from the corner (102) down the street to 110 W. Walnut St. "Fred (Hunt, owner of Hunt's in Rogers, Fayetteville and Springdale) and I got together and decided to expand, so we knocked out the partition and remodeled the whole store," said Balch. The entire front was "modernized" with aluminum trim around all of the windows and doors. All of the upstairs windows of the Opera House were bricked in and covered with plaster.

However, of all of the important and interesting businesses in this location, the most fascinating is the Opera House. The auditorium was the center of entertainment from the time it was built in 1890 until moving picture theaters became popular about 1920. Many traveling theater groups, musical shows, speakers, politicians and local groups performed there including Betty Blake, wife of Will Rogers.

As attendance at plays and performances in the Opera House declined in the early 1920s, an attempt was made to revive it by converting the stage into a boxing ring. An ad in the Rogers Daily News on Feb. 7, 1924, advertised two boxing matches and one wrestling match with general admission of 50 cents and ringside seats for $1.25.

The lodge hall on the third floor and the Opera House have been vacant for almost a century, and the professional offices on the second floor have been vacant since the 1960s. Amazingly, the Opera House is still intact with the worn wooden stairs, ticket window, the balcony with its tiers of raised rows and the original stamped tin ceiling. The wall of the dressing room beside the stage is still adorned with names of actors and performers, play titles and show dates from 1900 until the late 1920s. The only thing missing is part of the stage, which was removed when Hunt's added stairs in the 1960s, so the area could be used for storage.

However, new life is coming to the historic building. John Mack of JKJ Architects acquired the entire Opera Block except for 108 (formerly Russell's Five & Dime and now Novo Studio) in 2012 and is restoring it to its former glory. John is one of the best architects in Northwest Arkansas at restoring and preserving historic structures. One of his recent and most successful projects was the renovation of the 1928 Lane Hotel into Haas Hall Academy.

John agreed to give me an interview and tour of the building Feb. 19 to see the progress and hear his future plans for the building. I was overwhelmed with the tremendous effort and work that has been done. The first segment of the restoration was to remove the paint and plaster from the original brick exterior. The outside walls were constructed with three layers of bricks, all produced here in Rogers. When the bricks and mortar were exposed, much of the mortar between the bricks had deteriorated. The old mortar in the joints was tediously ground out by hand, and refilled with new mortar. In places where the original brick had been removed at various times during remodeling since 1895, newer brick was added that didn't match because it was going to be painted. John removed the mismatched brick and found used brick to match the original.

Almost all of the windows and trim in the upper floors are original, some with the original paint on the inside still intact. The doors and windows that had been filled in or covered over through the years were reinstalled to match the originals. No new doors or window openings were added, keeping the exterior as close as possible to the way it was in 1903 when the third floor was added.

According to Gary Townzen -- Townzen's Barber Shop has been in the building since 1958 -- the roof over the Opera House has leaked for at least 25 years. I asked John Mack why he didn't fix the roof first in the restoration process. He explained that the roof supports were so rotten, that no one could walk on it. Before the roof could be replaced, supports from the ground up had to be reinforced or replaced. So every level had to be rebuilt, strengthened or replaced all the way up to the third floor rafters before the roof covering could be replaced with a new state-of-the-art system.

The bottom floor of the building was originally wood, but through the years with many varied businesses, some of it had been replaced with concrete, and the wood floors that still existed had rotted beyond saving. In some places the flooring was three layers thick, new layers added as past remodeling was done. So, John removed the floor down to the dirt and plans to install concrete for the future.

For the last couple of years, watching from the street, there did not appear to be much progress being made on the restoration. However, I was awed by the amount of work done inside on the framework and structural reinforcements. Many tons of steel I-beams, girders and bracing of all kinds have been installed. With the help of a structural engineer, John has completely rebuilt the framework to not only support the floors and roof, but also to brace against lateral forces like high winds and earthquakes.

Now that all of the structural reinforcement is complete, finishing the interior can be started. The original wood trim and stamped tin ceilings were carefully removed and stored so the 130-year-old joists and rafters could be strengthened. As the walls and ceilings are fleshed out, any original material that possibly can be used will be re-installed.

John's vision for the future is for the street level to be retail and services; upstairs the second and third floors will provide opportunities for a variety of offices. The historic Opera House and stage will be restored to its 1903 appearance with meeting space and programs for 275 to 325 people.

The citizens of Rogers are very fortunate to have this important historic piece of history saved, and we can hope it will continue to serve for at least another 100 years.