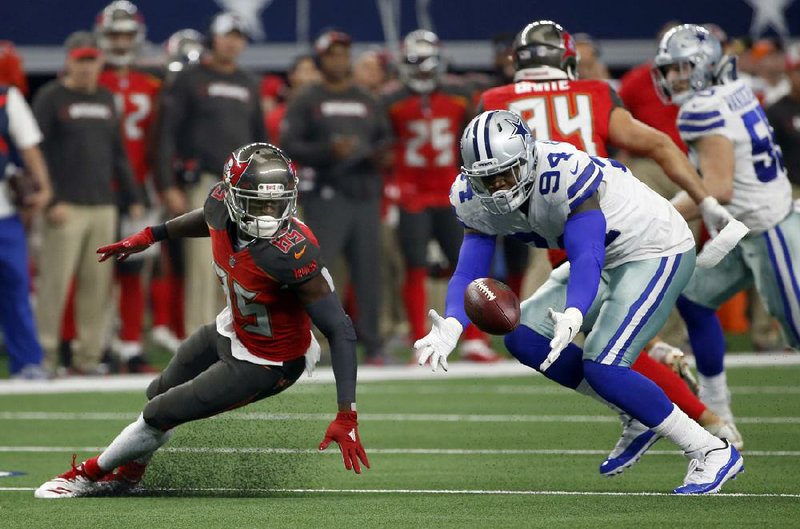 Dallas Cowboys defensive end Randy Gregory (94) has applied for reinstatement with the NFL after he was suspended a second time for repeatedly failing, or missing, drug tests. AP file photo

The Dallas Cowboys' best chance to acquire a top defensive player now comes down to whether the NFL will reinstate a guy who has served more year-long drug suspension than he has NFL starts.

Randy Gregory is the "ugly baby" the Cowboys have gone above and beyond for time and again. This even exceeds the norm for Jerry Jones' threshold for player behavior.

Randy Gregory owes Jerry and the Cowboys, and he needs to pay, and play, up.

The Cowboys are forced to count on a guy whose contributions should be gravy but now are a necessity.

The defensive end has applied for reinstatement with the NFL after he was suspended a second time for repeatedly failing, or missing, drug tests.

His "drug" of choice was, famously, marijuana. Under the rules of the new collective bargaining agreement between the NFL and the NFL Players Association, it will no longer test for weed.

That should make Gregory a lock to be reinstated in the next 60 days.

When he does come back he'll be the most exciting "new" player for a defense that was barely average last season, and remains in need of players, and plays.

The defense that has seen starters Jeff Heath, Byron Jones, Robert Quinn and Antwaun Woods all leave in free agency, ranked 25th in the NFL in turnovers forced last season, and 19th in sacks.

Since Gregory dropped to the second round of the 2015 NFL Draft over a load of "character concerns," the Cowboys have stood by him like he was a member of their Ring of Honor.

There is 'til death do you part. And then there is the Cowboys' marriage to Randy Gregory.

In the span of five years, he has missed two full NFL seasons because of his drug-related suspensions.

In the span of five years, he has played a total of 28 NFL games.

In the span of five years, he has made one NFL start.

They stand by him because he's a nice, likable guy.

Randy Gregory is not some cliche dummy who has an ambition to die young, and go broke. There are some legitimate mental disorders he deals with, and has sought treatment, to manage.

The Cowboys lobbied the league to have Gregory treated by medical professionals they know, and prefer. The league wanted otherwise.

By all accounts, he's trying to make his life better, and figure it all out.

He is only 27, and even though the NFL no longer tests for weed it feels like Randy Gregory is out of time.

As Jason Garrett can attest, Jerry is a patient man.

As Dez Bryant can attest, when Jerry makes a decision, it's over.

Even with a new coaching staff, how much more can the Cowboys endure for a player who has provided more headaches than plays?

In 2018, when he played in 14 games, he showed enough to make it look like he was worth all of it. After his conditioning came around, the Cowboys started to see plays.

He had six sacks that season opposite DeMarcus Lawrence. Opposing offenses had to be aware, and Randy Gregory looked like a player.

Now he will be coming back from another year-long suspension, and the Cowboys need him.

The linebacker position that looked so good this time one year ago is now an epicenter of concern. Jaylon Smith regressed, Leighton Vander Esch may never be the same because of the injury to his neck, and Sean Lee is no longer the player he was.

Tank Lawrence has prime years remaining, and adding veteran defensive tackle Gerald McCoy is a nice addition, provided he has something left.

Until the draft, there is no more proven help coming.

Randy Gregory is it. And he owes it to the Cowboys.