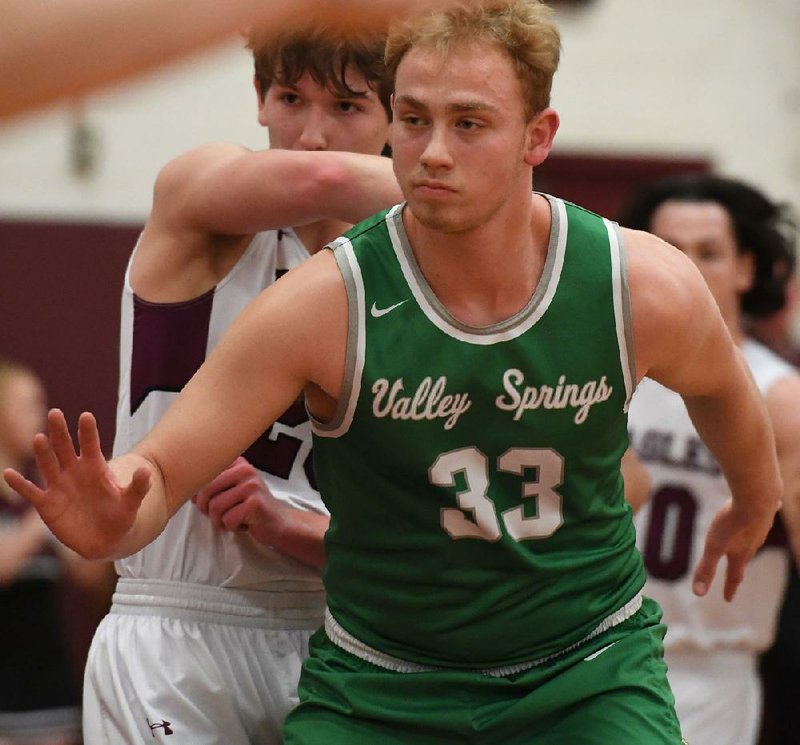 Isaac Ragland needed to be pushed in order to take his game to the next level, and Valley Springs provided the kick he needed after transferring from another school.

Ragland moved from Marshall to basketball-crazed Valley Springs before his junior season. Two seasons and a 69-9 record proved that the move was an overwhelming success for both Ragland and Tigers' coach Blake Hanney.

"He challenged me every day," Ragland said of Hanney. "If I made 10 shots in a row and missed the next one, he would let me know about it. That's what I really needed to help me at the next level."

With Ragland providing the scoring leadership, Valley Springs went 36-4 and advanced to the second round of the Class 3A state tournament.Valley Springs won 3A-1 East Conference and 3A Region 1 titles as Ragland averaged 19.1 points and 6.7 rebounds per game earning the Northwest Arkansas Democrat-Gazette Division II Boys Player of the Year honors.

Ragland has verbally committed to the University of the Ozarks and was scheduled to sign in April before the covid-19 outbreak.

Ragland said playing his final two years at Valley Springs will be something he will carry with him.

"It was hard but it was fun, too," he said. "I enjoyed playing here and I will always remember the good games and my teammates."

Lavaca coach Renner Reed is the All-NWADG Division II Boys Coach of the Year after leading the Golden Arrows to a 34-5 mark and the Class 2A semifinals before losing to England. England went on to win the state title before the state tournament was canceled after one day because of the covid-19 outbreak.

Reed, who played at Winslow and graduated from Arkansas Tech, just completed his seventh season at Lavaca. The last four seasons have seen the Gold Arrows win 22 or more games four straight years, but Reed's first three seasons were a struggle as he worked to build the program.

"Back then, our kids worked so hard and they believed they could win and get better," Reed said of his early seasons. "These guys now they watched them and even though we didn't win a ton of games, we could see the improvement. It's all about getting over the hump and the last 3-4 years it's started to take off."

Lavaca returned four starters from last year's 22-6 team. The Golden Arrows also played with somewhat of a chip on their shoulder after getting upset the year before in the first round of the regional tournament, Reed said.

"We went into the offseason with some adversity," Reed said. "All the guys committed to working hard, so it was a good combination of work ethic and desire that led us this season."

Drake Grantham was the missing piece the Golden Arrows needed, and the 6-foot-2 sophomore provided a spark off the bench this season, averaging 8 points and 7 rebounds per game. Grantham led the team in charges taken and was the top scorer for the Arrows in regional tournament play, earning All-NWADG Newcomer of the Year honors in Division II.

Fitting into a senior-heavy team can be a challenge, but Grantham said the older players took him in.

"It was hard at first because those guys had been playing for three or four years together," Grantham said. "As the year went on, they saw that I just wanted to win as bad as they did."

Grantham will be the face of the program for the next two seasons, Reed said.

"We knew Drake was going to be good even at an early age," Reed said. "We knew that we were going to have to find ways to get him on the court this year. He does a lot of the things you talk about. He rebounds well, he's a great defender."

Averaged 8 points and 7 rebounds per game for team that advanced to 2A semifinals.

Led Golden Arrows to a 34-5 record. Lost in 2A semis to state champion England.

Averaged 30 points and 5.7 rebounds per game for 3A-1 West Conference tri-champs.

Averaged 23.1 points and 6.2 rebounds for 4A-1 East Conference champs.

Averaged 14 points and 8 rebounds per game for 2A semifinalist team.

Averaged 23.4 points and 11.8 rebounds per game for 3A-1 West Conference tri-champions.