Weddings postponed in the time of coronavirus 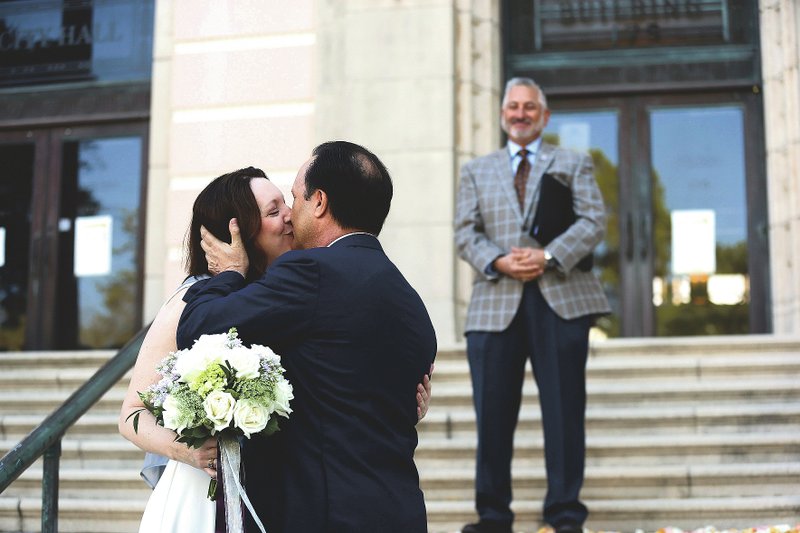 Kristen Shepherd kisses her husband Todd Berman as the couple gets married Friday on the steps of City Hall with Mayor Rick Kriseman officiating in St. Petersburg, Fla. The coronavirus forced Shepherd to cancel her original wedding plans. So she contated Kriseman to see if he would officiate her marriage to Berman on the steps of City Hall, with less than 10 people in attendance and all standing 6 feet apart. (Tampa Bay Times/Dirk Shadd)

NORWALK, Conn. -- Ginellie Ginel doesn't know when she'll be able to wear the wedding dress hanging in her closet.

She planned her church wedding for May, but when the coronavirus started to spread in Connecticut, those plans changed quickly.

As of Sunday, the state confirmed more than 225 cases in Connecticut and five people had died of covid-19, which is caused by the coronavirus.

In the past week, Connecticut Gov. Ned Lamont has ordered all restaurants to close their dining rooms, limited any gatherings to 10 people or fewer and municipalities have closed public buildings, an end to all events, including weddings. Houses of worship also have stopped public services.

At this point, Ginel and her fiance were just wrapping up the finishing touches to the big day -- invitations had been sent, RSVPs received, her dress bought and tailored, the church and restaurant booked -- when the restaurant they reserved for the reception said they'd need to postpone

"As far as right now, all major plans have been put on hold," Ginel said. "We were hoping and praying, let's see how far it would go and give it another month, but as soon as the restaurants announced restrictions on huge gatherings, that's when we had to figure it out."

Ginel isn't alone in this experience as couples and vendors alike are grappling with rescheduled or canceled events.

"It's so hard," said Lisa Antonecchia, a Connecticut wedding and event planner who owns Creative Concepts by Lisa. "Planners and vendors alike, we're just trying to find what the new normal is."

Antonecchia, who plans weddings and other events around the state, has a client similar to Ginel who was planning to get married May 7. Three weeks ago, Antonecchia said she was thinking things would be OK enough for the wedding to happen as planned, but once the Centers for Disease Control and Prevention recommended limiting events to 50 people, that possibility changed.

"That requirement was a relief and a horrible thing to have to hear at the same time," she said.

Before it, professionals in the industry were lost as to what to do with upcoming events, she said.

With the current restrictions in the state, some of her clients have rescheduled to as far as 2022, while others want to get married as soon as a town hall is open again, planning the party for a later date, she said.

Ginel said she's looking to push off her church ceremony and reception until October but wants to tie the knot at city hall as soon as they can.

As couples with weddings in May and June weigh whether to immediately postpone or wait as long as possible in hope of things improving by then, they're juggling caterers, florists, venues and guests.

"As I'm talking to clients, they feel awful because they know their vendors are sole proprietors and don't want them going out of business," Antonecchia said.

And as more events need to be canceled or rescheduled, every business involved in putting those big days on has felt the ripple.

"Caterers are letting go their staff because no events are coming up, and florists and bakeries have to let people go, because they are trying to protect their businesses as long as possible," she said.

Even though caterers and venues may employ a lot of people, they're often run by one or two people and are susceptible to closing if they suffer one bad season, she said.

Hope Looney, owner of JCakes bakery in North Branford, Conn., had to let her 10 employees go just to help preserve the business.

"We were pushed into a corner in the blink of an eye," she said. JCakes has been around nearly 30 years and in her 13 years running the business, she's never had to consider layoffs.

She's canceled 40 orders scheduled for the next few weeks, but she's just waiting for more to come, she said.

Without large events happening, florists are another domino on the line taking a fall.

Palazzo said the business has been slowing down, with fewer trucks making deliveries and the demand for flowers overall having decreased.

With those canceled orders, if businesses can't find another way to sell or repurpose their products, they just have to eat the cost of it, she said.

Palazzo said it's crucial for businesses to examine their contracts to help ensure they're not wiped out by cancellations.

With so much uncertainty about how long these cautionary measures will last, businesses such as JCakes and City Line Florist are doing what they can to adapt.

Both are offering no-contact pickups and delivery and trying to find new ways to market themselves.

Looney said she shipped her first "quarantine cake" that says "wash your hands" to her friend, and she's hoping she can do more of them.

Antonecchia bought a JCakes sheet cake to get delivered to Yale New Haven Hospital to say "thank you" to the staff.

Palazzo is encouraging customers to remember flower shops can help bring relief to some symptoms of social distancing and quarantine.

"Right now, people don't usually think of flowers, but there's so many studies that show there's more to flowers than being pretty," she said. "They help mental health, reduce stress and anxiety. That's one way to help to get through everything and just support your local flower shop at this time."

Venues, which can't hold large weddings until the gathering restrictions are lifted, are sitting tight for a while.

Megan Bush, executive director of the Wadsworth Mansion, said they've canceled or rescheduled all their events -- mostly corporate and weddings -- in April and are waiting until the end of that month to reschedule anything after that.

"Our couples have been so great, and the first thing they ask is how we're doing" she said. "It's a testament to our industry, and we're lucky in that respect."

Bush said the mansion had about 100 weddings in the books this year from March to December. One couple canceled a booking for March, and the mansion needed to reschedule 20 weddings so far in March and April.

When it comes to rescheduling, Bush said popular venues such as Wadsworth are booked for the rest of this year and much of next year, since as a business plan, they look 15 months out.

If couples did try to reschedule for later this year, they would need to take less-popular times, such as Thursday night, Bush said, and for couples who already have had to reschedule because of the coronavirus, she'd give them the first choice over new bookings.

If the requirements against gatherings last longer, Bush said couples probably will get creative with their ceremonies and consider livestreams.

While Antonecchia said she's not considering new bookings until October because she doesn't know how the virus measures will develop, she and others are hoping it improves sooner.

"I am counting on May, but I don't know if I should wait longer," Looney said.

"I know every industry is affected, and it's scary times for everyone," Palazzo said.

Print Headline: Weddings postponed in the time of coronavirus