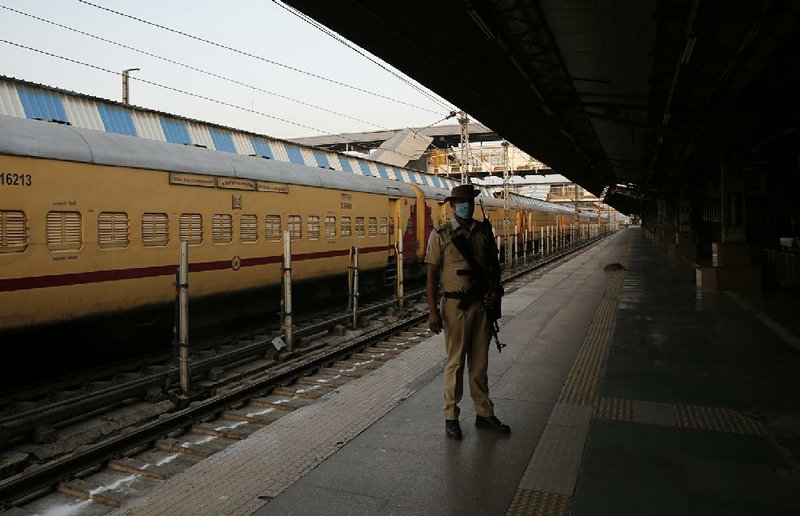 A security guard keeps watch Tuesday at a deserted railway station in Prayagraj, India, after Prime Minister Narendra Modi imposed a “total lockdown” of the country for 21 days. “To save India and every Indian, there will be a total ban on venturing out of your homes,” Modi said. More photos at arkansasonline.com/325india/. (AP/Rajesh Kumar Singh)

NEW YORK -- President Donald Trump said Tuesday that he wants "the country opened" by Easter, and the Tokyo Olympics were put off to next year as coronavirus deaths and infections rose in Europe and the U.S.

"We're going to lose more people by putting a country into a massive recession or depression," Trump said. "You're going to have all sorts of things happen; you're going to have instability. You can't just come in and say let's close up the United States of America, the biggest, the most successful country in the world by far.

"Our people are full of vim and vigor and energy. They don't want to be locked into a house or an apartment or some space," Trump said. Speaking of the economy, he added, "The faster we go back, the better it's going to be."

Health experts point to evidence from around the world that closing businesses and schools and minimizing social contact are essential to avoiding infections.

"To be a week into these restrictions and already be talking about abandoning them is irresponsible and dangerous," said Tom Inglesby, director of the Johns Hopkins Center for Health Security. Removing restrictions now would allow the virus, he said, to "spread widely, rapidly, terribly, and could kill potentially millions in the year ahead with huge social and economic impact."

Already, America's shift to social distancing has caused widespread layoffs, including in restaurants, hotels and the oil industry. Unemployment has health consequences as well as economic consequences, economists have noted.

Forecasters on both sides of the debate are trying to weigh these losses against deaths from covid-19 as well as other medical emergencies that won't be treated properly if the health care system becomes overrun with virus patients.

"One of the bottom lines is that we don't know how long social distancing measures and lockdowns can be maintained without major consequences to the economy, society, and mental health," John Ioannidis, a medical and epidemiology expert at Stanford University, wrote in an essay last week. "Short-term and long-term consequences are entirely unknown, and billions, not just millions, of lives may be eventually at stake."

"I am deeply concerned that the social, economic and public health consequences of this near total meltdown of normal life ... will be long lasting and calamitous, possibly graver than the direct toll of the virus itself," David Katz, a preventive medicine specialist at Yale University, wrote over the weekend.

"The unemployment, impoverishment and despair likely to result will be public health scourges of the first order," he said.

Dr. Anthony Fauci, the nation's leading expert on infectious diseases and a member of the White House's coronavirus task force, did not appear at the virtual town hall, but Trump denied there were any tensions between the two men.

"I will be guided very much by Dr. Fauci and Deborah," Trump said, referring to Dr. Deborah Birx, the coordinator for the task force.

At a news briefing later, Fauci said: "No one is going to want to tone down anything when you see what is going on in a place like New York City." But he suggested he would be willing to examine the potential for easing the advisories from the Centers for Disease Control and Prevention in areas that have been less affected by the outbreak.

Meanwhile, in New York City, now one of the biggest hot spots for the virus, authorities rushed to set up thousands of hospital beds for potential victims. But the number of cases is doubling every three days, threatening to swamp the city's intensive care units in the weeks ahead, Gov. Andrew Cuomo said.

New York state has recorded more than 200 deaths, or one-third of the U.S. total.

"One of the forecasters said to me we were looking at a freight train coming across the country," the governor said. "We're now looking at a bullet train."

Cuomo proposed that the country send thousands of ventilators to New York City -- the metropolitan area needs 30,000 of them, he said -- and demanded that Trump use wartime authority to force manufacturers to produce them.

Trump has invoked the Korean War-era Defense Production Act to deter hoarding but has not used it to force companies to produce medical supplies. Vice President Mike Pence said on Fox News that 2,000 ventilators have been shipped to New York and 2,000 more will be sent today.

Rather than debating whether to continue restrictions, leaders should be asking whether enough is being done because there are alarming indications to the contrary, said K.J. Seung, a doctor and project director for the Partners In Health in Boston.

"When you compare what U.S. is doing with countries in Asia that have been successful, we are not doing half the measures they are," Seung said.

What Americans consider lockdown and quarantine, for example, is leaky in comparison, he said. "You have people still driving around. No one is wearing masks when they go out because there aren't enough," Seung said.

But with infections in the U.S. exceeding 50,000, including more than 670 deaths, public health experts have warned that failing to maintain social distancing would balloon infections to the point the health care system would be overwhelmed and many more people would die.

There are signs the U.S. outbreak is outpacing even the world's worst-hit countries. There are now more new cases per day in America than in any other country, and the steepness of the upward curve exceeds most other countries including Italy, where nearly 7,000 people have died.

Elsewhere, India, with 1.3 billion people, or one-sixth of the Earth's population, ordered the biggest lockdown in the world. A flicker of hope that Italy is turning the corner faded after officials reported an increase in new cases and deaths. And Spain had so many bodies that it commandeered an ice rink to store them.

More than 417,000 people worldwide have been infected and more than 18,600 have died, according to a running count kept by Johns Hopkins University.

The International Olympic Committee postponed the 2020 Tokyo Olympics until the summer of 2021 at the latest, acting on the recommendation of Japan's prime minister. That poses a heavy economic blow to Japan and could upset athletes' training regimens, perhaps costing some of them a shot at a medal.

Spain, meanwhile, registered a record one-day increase of nearly 6,600 new infections and a leap of more than 500 in the death toll, to almost 2,700.

The country started storing bodies in an ice rink converted to a morgue until they could be buried or cremated. Also, army troops disinfecting nursing homes found elderly people living amid the bodies of suspected coronavirus victims. Prosecutors opened an investigation.

"All over the country, you see examples of workers inventing homemade suits using plastics," said Olga Mediano, a lung specialist at a hospital in Guadalajara, a city outside Madrid. "The protective suits are fundamental because without health workers, we won't be able to do anything."

In France, authorities said the virus had claimed 240 more victims, raising the country's death toll to 1,100.

In Italy, a jump in the number of new deaths and cases over the previous 24 hours dashed hopes fed by two days of declines. The 743 deaths reported Tuesday pushed Italy's toll past 6,800, by far the highest of any country.

"Woe to whoever lets down the guard," Health Minister Roberto Speranza said.

In a distinct shift in the crisis, some 85% of new infections are coming from Europe and the United States. In fact, Chinese authorities said they would end the two-month lockdown in hard-hit Hubei province, where the outbreak began.

"Just to put it in proportion: It took two years in the worst Ebola outbreak we ever had, the West African outbreak, to reach 11,000 deaths," she said.

In Britain, confusion rippled through the country on the first morning after Prime Minister Boris Johnson ordered a three-week halt to all nonessential activity.

The government told most stores to close, banned gatherings of three or more people and said everyone apart from essential workers should leave home only to buy food and medicine or to exercise. But photos showed crowded trains on some London subway lines.

In contrast to other European countries, Germany offered some hope that it has flattened the exponential spread of the virus, which has infected some 30,000 people. The death toll was relatively low at about 130, and Germany has even taken in patients from France and Italy for treatment.

In India, Prime Minister Narendra Modi decreed a "total lockdown" of the country for 21 days. India has reported about 500 cases.

Neighboring Pakistan ordered its railways shut down as infections climbed past 900.

The Philippine Congress approved a bill declaring a national emergency and authorizing President Rodrigo Duterte to launch a huge program and tap private hospitals and ships to help as the country reported more than 550 cases.

For most people, the virus causes only mild or moderate symptoms, such as fever or coughing. But for some older adults and people with existing health problems, it can cause more severe illness, including pneumonia. More than 100,000 people have recovered.

Information for this article was contributed by Adam Geller and David Rising of The Associated Press; and by William Wan, Reed Albergotti, Joel Achenbach, Carolyn Y. Johnson and Heather Long of The Washington Post. 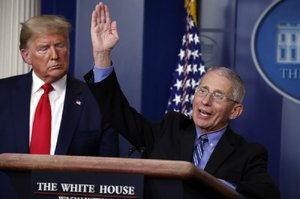 Dr. Anthony Fauci said Tuesday at a news briefing at the White House that he would consider easing advisories in some areas, but warned: “No one is going to want to tone down anything when you see what is going on in a place like New York City.” (AP/Alex Brandon) 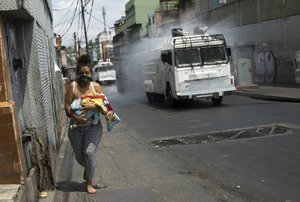 A woman runs with her baby Tuesday in Caracas, Venezuela, as a Bolivarian National Guard water cannon sprays disinfectant to fight spread of the coronavirus. President Nicolas Maduro has ordered everyone in the nation to stay at home. (AP/Ariana Cubillos)