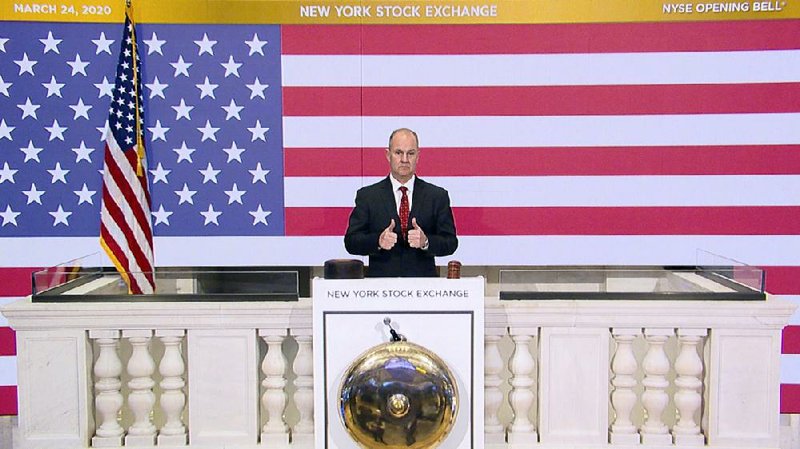 NEW YORK -- The Dow Jones Industrial Average surged to its best day since 1933 as Congress and the White House neared a deal on Tuesday to inject nearly $2 trillion of aid into an economy ravaged by the coronavirus.

The Dow burst 11.4% higher, while the more closely followed S&P 500 index leapt 9.4% as a wave of buying around the world interrupted what has been a brutal month of nearly nonstop selling. Investors released some frustration that had pent up over days of watching the Senate stalemate over the crucial rescue package.

All 11 S&P sectors were positive, led by a beaten-down energy sector that had lost half of its value this year as oil prices collapsed. Energy stocks posted a nearly 10% gain, led by oil giants such as Chevron. Several oil companies, including BP, saw shares spike after companies said they would tighten their belts in the wake of the rock-bottom prices.

Boeing, Home Depot, American Express, JPMorgan and Walt Disney -- most of whom have been savaged by the coronavirus restrictions -- had big days on the Dow as optimism over the stimulus took hold.

Despite the gains, investors were far from saying markets have hit bottom. Rallies nearly as big as this have punctuated the past few weeks, and none lasted more than a day. Economists and investors alike are still expecting to see some dire economic numbers in the days and weeks ahead.

"Today was a good day, but we would not necessarily see this as turnaround time," said Adam Taback, chief investment officer for Wells Fargo Private Bank.

Both Democrats and Republicans said during the day Tuesday that they were close to agreeing on a huge economic rescue package, which will include payments to U.S. households and aid for small businesses and the travel industry, among other things.

Investors were imploring Congress to act, particularly as the Federal Reserve has done nearly all it can to sustain markets, including its latest round of extraordinary aid unveiled Monday.

"It's sort of like, keep the patient alive in the emergency room so you can provide some treatment options," said Katie Nixon, chief investment officer at Northern Trust Wealth Management.

The market has seen rebounds like this before, only for them to wash out immediately. Since stocks began selling off on Feb. 20, the S&P 500 has had six days where it's risen, and all but one of them were big gains of more than 4%. After them, stocks fell an average of 5% the next day.

"One of the things to be careful about is thinking this will be the panacea or that this fiscal response will be sufficient," said Eric Freedman, chief investment officer at U.S. Bank Wealth Management.

Ultimately, investors say they need to see the number of new infections peak before markets can find a floor. The increasing spread is forcing companies to park airplanes, shut hotels and close restaurants to dine-in customers.

President Donald Trump said Tuesday during a Fox News virtual town hall that he hopes to "open up " the economy by Easter. Analysts said the pronouncement wasn't a contributor to the day's huge rally, which was mostly from stimulus hopes.

Economists are topping one another's dire forecasts for how much the economy will shrink this spring because of the closures of businesses, and a growing number say a recession seems inevitable.

Some of the market's areas hardest hit by the closures, though, led the way higher Tuesday as expectations rose for incoming aid from the U.S. government.

Norwegian Cruise Lines, MGM Resorts and American Airlines Group were all up at least 33%. Energy companies and banks were also strong, though all remain well below where they were a month ago.

Intel shares climbed by 5%, to $52.10. Goldman Sachs analyst Toshiya Hari raised his rating on Intel's stock to neutral from sell on the grounds that the semiconductor giant could end up seeing business increase as a result of the growing trend of people working remotely.

Governments and central banks in other countries are unveiling unprecedented levels of support for their economies in an attempt to limit the scale of the upcoming virus-related slump. Germany, a bastion of budgetary discipline, also approved a big fiscal boost.

The gains came even as the first reports arrived showing how badly the outbreak is hitting the global economy. In the United States, a preliminary reading on business activity in March showed the steepest contraction on record, going back to 2009. Reports were also gloomy for Europe.

"Everyone was prepared for a set of shockers, and that is precisely what we got, but they are not a surprise," said Chris Beauchamp, chief market analyst at IG. "It is at times like this that the market's propensity to look forward is demonstrated most effectively."

More gloomy data is nearly assuredly on the way. On Thursday, economists expect a report to show the number of Americans applying for jobless claims easily set a record last week. Some say the number could be way beyond 1 million, during a wave of layoffs, topping the previous record of 695,000 set in 1982.

Helping to lift sentiment in markets Tuesday was news from China that it is preparing to lift the lockdown in Wuhan, the epicenter of the outbreak.

"Beijing announced that its lockdown on Hubei province will be lifted on April 8," said David Rosenberg of Rosenberg Research. "The case count there has plunged significantly. Korea is in such good shape it is now exporting masks. There seems to be a light at the end of the dark tunnel in Italy, too. And here at home, President Trump is talking openly about establishing a balance between health and wealth."

Tuesday's gain in risk assets follows an unprecedented move by the Federal Reserve to backstop large sections of the financial system.

Still, key gauges of U.S. manufacturing and services in March fell the most on record, suggesting the deep toll the pandemic has already taken.

"Sentiment has improved, but to call it a turning point is too strong a word for now," said James McCormick, global head of desk strategy at NatWest Markets. "It is more of a tug of war. Policy bazooka is in place, but will be fighting against very weak data and still worrying trends on covid-19 data. We are more neutral on risk assets now."

Information for this article was contributed by Stan Choe, Damian J. Troise, Alex Veiga and Joe McDonald of The Associated Press; by Rex Crum of the San Jose Mercury News; by Claire Ballentine and Vildana Hajric of Bloomberg News; and by Rachel Siegel and Thomas Heath of The Washington Post. 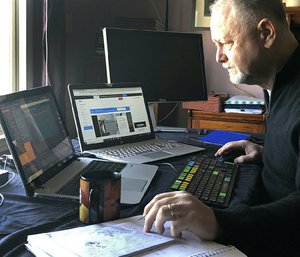