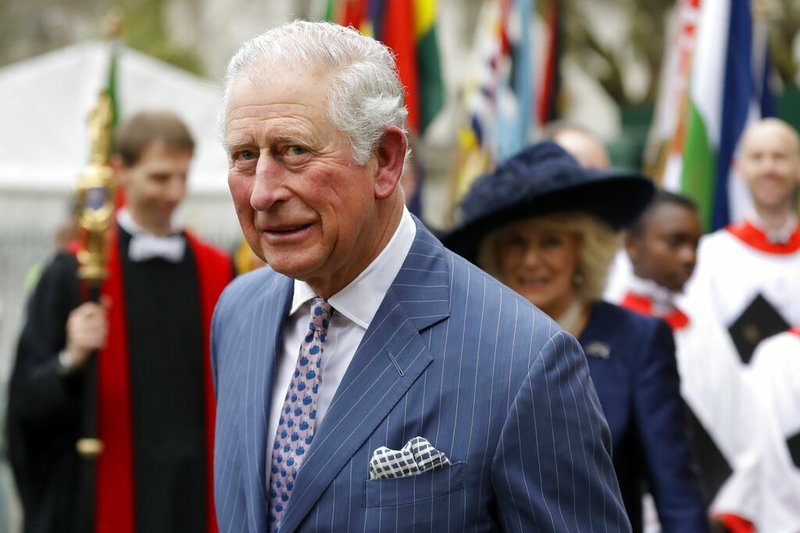 FILE - In this Monday, March 9, 2020 file photo, Britain's Prince Charles and Camilla the Duchess of Cornwall, in the background, leave after attending the annual Commonwealth Day service at Westminster Abbey in London. - Photo by AP/Kirsty Wigglesworth

LONDON — Prince Charles, the heir to the British throne, has tested positive for the new coronavirus, his office said Wednesday.

The 71-year-old is showing mild symptoms of covid-19 and is self-isolating at a royal estate in Scotland, his Clarence House office said.

It says his wife Camilla, 72, has tested negative.

"The Prince of Wales has tested positive for Coronavirus,'' Clarence House said. "He has been displaying mild symptoms but otherwise remains in good health and has been working from home throughout the last few days as usual.''

Britain's Press Association, citing a source, said the prince and the duchess remained in good spirits, and that Charles was not bedridden.

The tests were carried out by the National Health Service in Scotland.

"It is not possible to ascertain from whom the prince caught the virus owing to the high number of engagements he carried out in his public role during recent weeks," the statement said

Buckingham Palace said Queen Elizabeth II, 93, remains at her home in Windsor with the 98-year-old Duke of Edinburgh.

"Her Majesty the queen remains in good health,'' the palace said. "The queen last saw the Prince of Wales briefly after the investiture on the morning of 12th March and is following all the appropriate advice with regard to her welfare."

Prince Philip was not with the monarch when she last saw Charles.

Charles' last public engagement was March 12. He has had a number of private meetings, and participants at those sessions have been made aware of his condition.

Charles attended a roundtable meeting on March 10 with Monaco's Prince Albert II, who has since tested positive for COVID-19. The British royal is not believed to have shaken hands with Albert at the WaterAid Summit in London on that day.

Charles has been photographed doing the namaste gesture, with hands pressed together, at public events in recent weeks, including the Commonwealth Day Service on March 9 at Westminster Abbey. The event was the last formal engagement of Prince Harry and his wife Meghan.